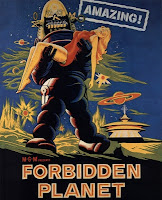 For people that like golden era pulp SF, Forbidden Planet is retro-futuristic mana. The use of miniatures and matte paintings in this movie makes for some spectacular eye-candy, if you aren't spoiled by the technological excesses of today's CG-fests.

The plot is something that could have come from an episode of radio's Dimension X. Leslie (Naked Gun) Nielsen is Captain Adams, helmsman of an Enterprise style spaceship sent to the planet Altair to investigate / rescue a previous space mission to colonize the planet. The only characters the captain and his two lieutenants (hmm, a precursor to Star Trek's Kirk-Spock-McCoy trio?) encounter are Dr. Morbius, a survivor of the previous mission, his naïve daughter Alta and a do-it-all robot called Robby whose absolutely charming suit design (it definitely is a man in a suit) without question inspired the look of the robot from Futurama.

Morbius lives in a swanky pad at odds with the rocky barren terrain of the rest of the planet and has all manner of gee-whiz gadgets that eclipse any of the technology Adams and his men have seen. But there's a sinister side too: According to Morbius everyone from the previous mission except for him and his wife were culled by a mysterious force shortly after they landed on the planet, and it looks like the arrival of Captain Adams' ship has re-awakened an ancient evil.

Forbidden Planet's grasp of technology is classic pulp hyperbole and absurdity, and it makes for an entertaining film, even if you have the odd lame moment like Robby using his built-in chemistry lab to synthesize 60 gallons of whiskey for the cook in Adam's crew. Nielsen does well as the square-jawed swaggering hero and Walter Pidgeon as Dr. Morbius provides an admirable delusional scientist foil. Apart from the afore-mentioned snazzy visual FX, the movie makes huge use of electronic sound and music cues in the soundtrack to bolster the SF factor. Plot-wise it's not as good as some of the better Star Trek (original series) episodes, and certain animation effects may not now inspire the fear and awe the makers were hoping for, but the bulk of Forbidden Planet carries a nice old-skool shimmer that makes it worth for retro-pulp fans like yours truly.

A kitchen sink of Badasserie!

Click on the pic to see in full detail: 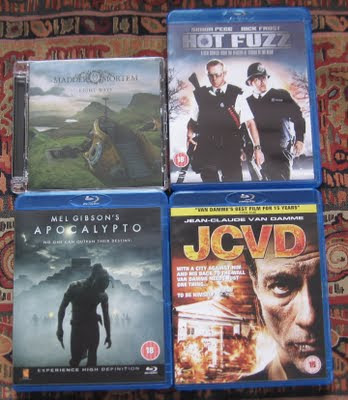