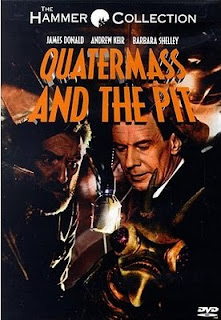 Having not seen any of the BBC televsion series, my exposure to Quatermass is restricted to two Hammer films, The Quatermass Xperiment and this one. Xperiment had good atmosphere and direction, and I am naturally a sucker for old-skool pulp science-fiction, but it was in the end more monster movie than hardcore SF. The Pit however, has greater ambitions.

The film starts with the discovery of proto-human skulls at a digging site in the underground rail station for this place originally called Hob's Lane (as one of the characters helpfully reveals, Hob is another nick name for the devil). Local science man Matthew Roney believes that the skulls date to a time well before previously known existence of man. More mystery unfolds when the digging crew unearths a metallic compartment never seen before. Colonel Breen and Professor Quatermass come in as the government's military and scientific representatives. While Breen is quick to dub the compartment as an unexploded German warhead, glossing over such inexplicables as why the metal is hazardously cold to the touch and can resist any amount of heat/drilling without disclosing its insides, Quatermass, alongwith Roney's assistant Barbara, undertakes a more holistic investigation, linking events in the local history of Hob's lane to the presence of the alien compartment. The script by Quatermass creator Nigel Kneale interprets old superstitions in the light of an alien intelligence and its impact on the human civilization. In fact, The Pit's major idea is that modern man was an engineered product of the aliens as a means of transferring their mindset, and thereby surviving by proxy, when their own race died out. Shades of Stanley Kubrick's 2001: A Space Odyssey there, but in a far more accessible package.

Roy Ward Baker's direction maintains a serious scientific tone and the solid acting does a lot of service to the immersion factor here, necessary since the props and optical effects are distinctly low-budget and unsuited for the script's ambition. Andrew Keir is a good Quatermass, more pleasant-mannered than Xperiment's Brian Donlevy (Apparently that was a very wrong portrayal, rendering Quatermass an egomaniac, but I actually liked it a good deal and thought it added a certain bite to the character), but not afraid to talk tough when the situation calls. The supporting characters are all strongly etched in this film, although Col. Breen suffers from a lack of depth.

While the bombastic trick solution climax (all these alien invasion films have to have them, don't they?) is not particularly satisfying, the film on the whole is a good one, traveling a long way on interesting concepts delivered with respect and intelligence. Consider that a strong recommendation.
Posted by Suresh S No comments: 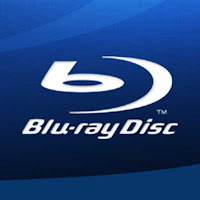 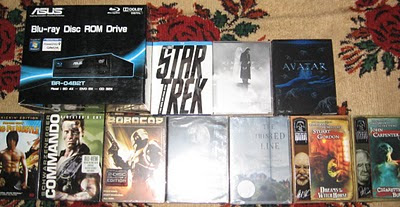 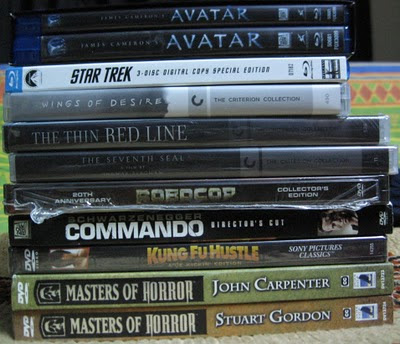 P.S. Update on the visual quality bit: Turns out some of the wonky quality visuals I had been getting was because of settings on my video card. The main culprit was this setting called "Dynamic Contrast" which makes on-the-fly adjustments to maximize the contrast in any given frame. Totally fucks up dark scenes / scenes with fog. All is good now.
Posted by Suresh S 1 comment: