A short while ago I watched Mifune: The Last Samurai, the documentary on legendary Japanese actor Toshiro Mifune, who with Akira Kurosawa formed a legendary collaboration, as acclaimed as John Wayne and John Ford, Max Von Sydow and Ingmar Bergman or Amitabh Bachchan and Manmohan Desai. 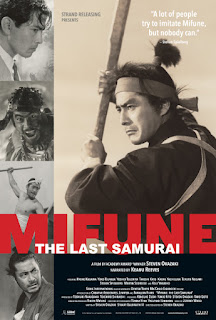 To reference the Samurai of the title, the documentary (narrated, at least in the English version, by Hollywood's own Last Samurai Keanu Reeves) begins not directly with Mifune, but with the depiction of Samurai in Japanese cinema, which started as early as the silent era. The swordplay dramas became known as chanbara, a term generated by the sound of blades clashing in combat.

After this beginning the film turns to its subject, touching upon Mifune's childhood as the son of a Japanese family in China. It was actually sometime near the beginning of WW2 that he returned to Japan and worked as an aerial photographer. After the war, Mifune applied for work in the growing film industry. Popular rumor says that his application for a cameraman's position was misdirected to the actors' section and he took it up anyway. Better represented in Kurosawa's Something Like An Autobiography, Mifune captured the director's imagination with his wild audition performance, which eventually led to a nearly 20 year collaboration, starting with 1948's Drunken Angel and ending with 1965's Red Beard. This history is supplemented with input about Mifune's nature and work ethic from the sons of Mifune and Kurosawa, and several of Mifune's co-stars including Seven Samurai actor Yoshio Tsuchiya and his leading ladies. The partnership with Kurosawa ended after Red Beard possibly because of tensions caused on account of the commitment required by the director from his leading star who was by then also a movie producer with a company to run.

Mifune also worked with several other Japanese directors (including notably Hiroshi Inagaki for whom he played legendary warrior Musashi Miyamoto in the famous Samurai Trilogy). The need to keep his company running meant Mifune went into TV, something of a comedown for a star whose presence dwarfed the biggest screens. He also worked in some international productions including John Boorman's WW2 castaway drama Hell in the Pacific, the East-Western Red Sun and Steven Spielberg's war spoof 1941. Spielberg himself is on hand in the documentary, relaxedly talking about Mifune as a star, the Kurosawa collaboration and his own experience of working with Mifune. The narrative highlights Mifune's standing as the first global Asian superstar.

The tone is of course quite reverential, the documentary glossing over the scandal of Mifune's infidelity, which led to a decades long separation from his wife Sachiko. Also, there are few new facts for Mifune fans. Of course that's not a knock against its makers, but a byproduct of this trivia-hungry information age. It would have been wonderful if they had any archival footage of Kurosawa speaking about Mifune (the only contribution from Kurosawa is in the reading of a posthumous letter he wrote Mifune after the actor expired in 1997 (less than a year before Kurosawa himself passed away).

People have asked me, but I am as of now loath to do a full review of this new version of The Batman. The reason is, this movie tries to be something other than be a cliche costumed hero reboot story, and revealing too many plot elements would spoil the fun. But these are my salient impressions:

So for me, this was a good bit of entertainment, certainly more so than Batman Begins. I just hope that the cameo character that comes in at the end is not going to be the focus of the next picture when there are so many more interesting possibilities to take.
Posted by Suresh S 1 comment: 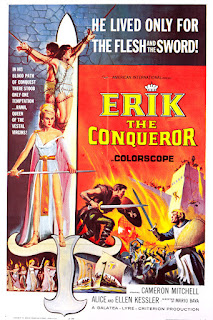 I haven't seen The Vikings (Richard Fleischer) which is supposed to have been a HUGE inspiration for Mario Bava's Viking movie Erik the Conqueror aka Gli Invasori (The Invaders). I don't think Bava was too interested in an authentic representation of Viking culture, substituting fjords and rivers with some clearly studio-made exotic subterranean cave with a huge fake tree in it. There are also dances from slinky women clad in diaphanous outfits that would see them shivering in actual Viking climes. The scenes of people sailing in longboats are clearly done on a studio set without any water (I think they just move the camera on a dolly to give the illusion of motion).

The plot is about two brothers, sons of a Viking king killed in battle with the English by betrayal. They are separated as children - Erik (Giorgio Ardisson) is found by the English queen and brought up as her own son, while Eron (Cameron Mitchell) is raised by his uncle and poised to become the next Viking-king. These 2 also happen to fall in love with twin sisters, who are vestal virgins (in Viking culture?) and do the dancing in diaphanous outfits. There's a convoluted plot which involves an evil British regent who actually engineered the death of the brothers' dad and is continuously scheming to gain control of the British throne, even if it means handing over the castle keys to the Viking invaders.

This is a melodramatic adventure movie, in which a fair amount of the script feels like it was being made up or shuffled around on a daily basis. More than the brothers or their lady loves, it is François Cristophe as the British Queen and Andrea Checci as the scheming regent who make an impact. Erik the Conqueror is not one of Bava's more distinctive directorial features, but it has its moments. The action scenes, given that this would have not got even a tenth of a Hollywood studio film's budget are fairly well done, with multiple planes of fighting (although there are some obvious repeated shots of people being felled). I'm sure Bava biographer Tim Lucas' commentary, which is included on the Arrow blu-ray I watched it on, will give some revealing insights into how specific scenes were filmed and how Bava used his VFX expertise to conceive and execute scenes well above the production's meager means.

I think the best and worst thing you can say about Ohm Shaanthi Oshaana (OSO, not to be confused with the overhyped Farah Khan movie) is that it is a pleasant film (ditto the director's later effort Sara's). Told from the POV of the heroine Pooja (Nazriya Nazim) - the young daughter of a doctor who develops a schoolgirl crush on a local farmer and tries to win his love even after he dismisses her crush as a temporary infatuation - it has a whimsical take on first love and how it endures all manner of obstacles to be finally fulfilled. 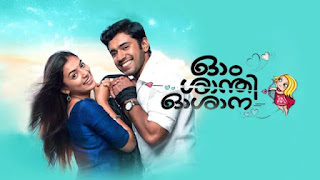 The good stuff first: a romance story told entirely from the POV of the girl is a refreshing experience. OSO is breezy and family-friendly throughout. The script emphasizes that life does not stop and take a break when love happens - Pooja's romantic arc starts when she is still a uniform-wearing schoolkid. All the while that she nurses her crush on farmer and local do-gooder Giri (Nivin Pauly), she still goes through her medical education and works on her internship - her career path is not some pointless namedrop, unlike say Madhuri Dixit's "computer student" from Hum Aapke Hain Kaun. While the romance is between a Christian and a Hindu, religion is never a hurdle to their companionship. Critical for a romance, lead actors Nazim and Pauly have strong chemistry (they also vibed well in the watchable thriller Neram). The screenplay has some playful and inventive visual ideas that directly address the audience and poke fun at cinematic romance idioms - for instance, after Giri shunts off to China to "learn kung-fu at the Shaolin temple (yep)", Pooja has a disturbing dream of him in stereotype oriental getup speaking in Chinese to his native wife.

The not-do-good: OSO is divided between its sincere romance and whimsical spoof elements. It simultaneously wants to poke fun at the romance drama genre and revel in its excesses. In a shorter (90 min) film, the whimsical 4th wall breaking aspects, well-done by themselves, would have been the punchy USP. In its current longer avatar, they sometimes seem like mildly annoying distractions from the narrative. Certain plot elements like the hints about "other women" in Giri's life are unnecessary cliches that suggest a kitchen sink approach rather than focus on how Pooja grows into adulthood while being steadfast to her first love.

Also the film is not clear about its stand on Pooja's tomboyish nature. When we first see her in the home of her indulgent parents, we learn that she loves to ride bikes, wear pants, practice archery, whistle and slide down bannisters. In her quest to win Giri (and his mother) she shifts to saris, and later sits behind Giri on his bike in the traditional sideways female pillion rider position. What does that say about her true inner nature and what her life is going to be post-marriage? Has she "matured" into the subservient Indian bride whose own preferences and expectations must take a backseat to her husband and family? Of course, there are hordes of feisty independent women that wear traditional clothing etc, but the lack of clear rationale behind these kind of deliberate changes in a film that is very vocal about championing the woman's desire leaves one dissatisfied.