A close friend had a theory of how Feroze Khan's film Dayavan came about. The way he figured it, FK and his friends, including Vinod Khanna, were having one of their customary all-night drinking sessions when they heard over the news that a Tamil movie called Nayakan had won its lead star Kamalahaasan and several others National awards, and was going to be sent as India's entry to the Oscars that year. 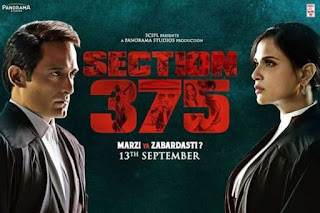 A film that professes to be a timely debate on the complexities of justice in rape trials, but relies on imbecilic trick reversals to play with audience sympathies. Akshay Khanna veers between smug smirking and being so low-key he's in the basement. Richa Chadha, brilliant in Masaan, collapses under the dual whammy of awful make-up and pedestrian characterization. Ugly's Rahul Bhat plays another shady creep, with diminishing returns. Other members of the cast seem to have wholly contradictory views about what sort of film they're in, which appears consistent with the state of the mind of the people that wrote and directed it.
Posted by Suresh S No comments: