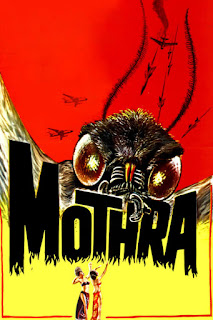 As the title so blatantly hints at, the monster in 1961's kaiju offering Mothra is a giant moth creature. Of course, monstrous here essentially relates to the creature's size, since Mothra is at least neutral if not outright benevolent towards humankind. It is the deity of a Polynesian island which had been considered uninhabited and even used for nuclear testing. That perception changes after the survivors of a Japanese ship run aground during a storm on this island are rescued and found to not be suffering the expected damage of radiation exposure. Not only does the island host a native tribal civilization, but they have concocted a red brew which seems to protect them from the radiation.

A joint expedition with leading scientists and explorers from Japan and the nation of Rolisica (a fictional country that seems to satirize the capitalist culture of the US) also discovers a pair of tiny singing women that are linked with a giant egg worshiped by the natives. Nelson, the Rolisican leader of the expedition, is played by Japanese-American actor Jerry Ito as a caricature of evil greed. Disregarding the "live and let live" policies of his Japanese colleagues, he grabs the little women (twins Emi and Yumi Ito of the pop band The Peanuts) with the intention of using them to make money as a showbiz attraction (like in King Kong).

In a mirror of US domination of Japanese policies, Nelson forcibly asserts his rights over the twins. His greed eventually leads to the hatching of Mothra from the giant egg. On a mission to restore the twins to their home on the island, the caterpillar form of Mothra swims its way to Japan causing much havoc both at sea and on land. it then forms a cocoon from which emerges the final form of the titular giant moth. Whether Mothra completes its mission and whether our Japanese heroes are able to persuade it to not attack humans in its course forms the rest of the film.

Although made by the same director (Ishiro Honda), Mothra differs in style from the seminal kaiju film, 1954's Godzilla/Gojira. Firstly it is in brash (Eastman?) color, not the black and white that gave a newsreel vérité quality to its predecessor. It has more cardboard heroes and villains, and is not as much about the conflict between nature and human progress as a good humans vs bad humans scenario. In the humorous relief (Frankie Sakai's cheeky reporter) and introduction of precocious child characters, it is also more geared to entertaining young audiences. All of these do make Mothra less impactful as a film than Godzilla was. That said it has some decent visual effects of the practical kind, and the very concept of a giant monster being serenaded with a weird song by tiny women tickles the imagination.