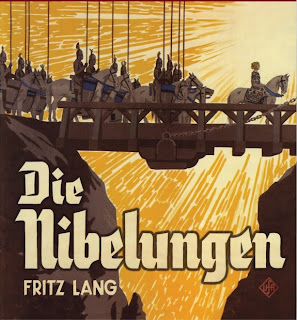 Calling Fritz Lang's Die Nibelungen, a stupendous two-part film adaptation (Part 1 – Siegfried and Part 2 – Kriemhild's Revenge) of the epic poem Nibelungenlied, a heroic fantasy saga would be something of a misnomer. By definition these are crafted around the heroes, their persona and deeds. The other players are more in the vein of interactive filler, supportive or obstructive, or perhaps a stand-in for the audience, marveling at the hero's feats. But Die Nibelungen goes the other way. Siegfried the hero is merely a catalyst that triggers the reactions and actions of the surrounding characters. Appropriately enough he is portrayed in uni-dimension, all valor and naivete.

The beginning of the first installment deals with Siegfried's meteoric rise to legend – on his way to claim the legendary beauty Kriemhild, he handily slays the dragon Fafnir, and by bathing in its blood becomes “nearly” invincible (more on that later). Just as easily he later defeats the Nibelung dwarf Alberich and becomes master of his treasure. These scenes are visually sumptuous, with some fantastic production design to depict the Nibelung forest and Alberich's mysterious cave dwelling, and demonstrate Lang's masterful directorial chops, but dramatically they do not register since Siegfried is almost never shown to be in mortal peril. Text inter-titles inform us that Siegfried then goes on to make twelve other kings his vassals.

On reaching the palace of the Burgundy royals, of whom king Gunther is Kriemhild's brother, he asks for the maiden's hand, only to be told by the warrior Hagen Tronje that he must first win for Gunther the hand of the fiesty warrior-queen Brunhild. Using the magic cloak he got after defeating Alberich, Siegfried helps the far-less-able king to defeat Brunhild in competition and claim her. He uses the cloak again on a later occasion, impersonating Gunther to break Brunhild's spirit with a hearty dose of machismo to smooth out Gunther's way in marriage. Alas, these are actions that will have dark consequences. At this point, Die Nibelungen sheds its heroic fantasy trappings and effectively becomes a courtroom intrigue. Tronje seeks to get rid of Siegfried considering him a rival to Gunther and the Burgundy line, while Brunhild wishes to take revenge on him for having tricked her into marrying a physical inferior. The misunderstandings and conspiracies pile up and, after tricking the innocent Kriemhild into revealing Siegfried's Achilles' heel (it's not a heel here), Tronje and Brunhild, with reluctant connivance from Gunther, do the bloody deed. So by the end of the first part, Siegfried is dead.

For me Siegfried really picks up when it goes into conspiracy mode. What works is that the so-called villains do not perform their deeds for villainy's sake. Tronje is a loyal of the Burgundy clan and his actions are directed to safeguarding their rule. Brunhild is a proud warrior and her rage at having been spited by Siegfried's trickery into marrying the wishy-washy Gunther is understandable. In fact her soul is so consumed by the thought of revenge that after Siegfried's death she kills herself because she has nothing else to live for. This is the stuff of great drama. The end of the first film also sees the bereaved Kriemhild rising from wallflower status into a source of greater substance.

So much so for the heroic fantasy, what next? Of course, revenge...

In the second installment Kriemhild, who is furious at the treachery that has murdered her husband, accepts a proposal of marriage from the savage king of the Huns, Etzel aka Attila. Unbeknownst to her family and people, her condition for marriage is that the murder of Siegfried shall be avenged. She bears Attila a son and goads him into inviting her family for the Summer Solstice feast. In the midst of the feasting, she contrives for the Huns to attack their guests, which eventually leads to a bloody siege where the Burgundy royals and their warriors are holed up in Attila's palace while the murderous Huns launch multiple attacks from outside. Kriemheld repeatedly asks her brothers to give up Tronje and save themselves, but they reward his loyalty by standing steadfast even in the face of death when she ruthlessly orders for the palace to be razed.

The second part of Die Nibelungen works even better than its predecessor. Freed of the trappings of the conventional fantasy adventure story, this one dives deep into the darkness of the human heart. What Kriemhild does here for revenge is no better than (and very likely a lot worse than) what Tronje and Brunild earlier contrive. In fact towards the end, the treacherous villains of the first part are shown as the courageous and loyal victims of her conspiracy. You cannot imagine how such a story arc can have a happy ending and the film-makers do not try to shoe one in either.

Through the course of both segments, the genius eye of Fritz Lang provides us with a sumptuous visual smorgasbord with fantastic use of locations and sets. The scale of the film is massive and detailing is exquisite with wonderful use of striking patterns and motifs. Siegfried had its share of excellent thrill sequences (given the restrictions of film technology of the day), and Kriemhild's Revenge is no slouch either. The last hour or so dedicated to the siege is a precursor to the battle in Peter Jackson's The Two Towers and a certain Akira Kurosawa could have well been inspired by the scene of the razing of Attila's palace for a similar sequence in his masterpiece Ran. The score by Gottfried Huppertz resurrected and played out for the restored version of the film is an iconic and inseparable aural match for the dramatic spectacle. I think it speaks for the entertainment value of the film that my initial intent to space out my viewing of the two installments over multiple days gave out and apart from the time necessary for sleep, I watched them pretty much back to back.
Posted by Suresh S No comments: