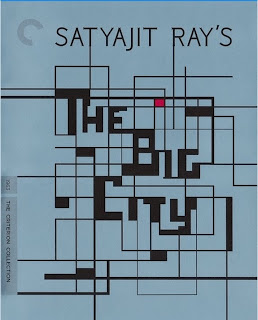 It's a little sad that Satyajit Ray has a reputation as an arthouse film-maker, which to most Indians signifies a dry, intellectual exercise, difficult to digest or pretentious, because IMO more than anything else, his main interest has been in telling interesting stories in an interesting and clear manner. With a couple of songs and perhaps a dollop of slapstick, his film Mahanagar could easily sit amongst the popular films of Basu Chatterjee or Hrishikesh Mukherjee, and should definitely be checked out by the people who like those films.

The story is about how a conservative middle-class family in Calcutta is affected when financial circumstances require that the wife should also take up a job. The film looks at it from two aspects:
1) The impact on the other family members - the loving but traditional husband, his orthodox parents, the young child (They all have reservation to some extent, and the only unequivocal supporter is the husband's kid sister, who sees it as a projection of her own ambitions)
2) The changes in the woman herself - how she grows from a shy house-bound wife to a more confident worldly-wise person.
Without any arty pretensions, but with the sharpness of observation and empathy towards the characters which are his strongest assets, Ray paints a very tangible portrait of this little personal revolution in the traditional family. Of course he is here immensely aided by the marvelous chemistry between the gorgeous Madhabi Mukherjee and Anil Chatterjee - their husband-wife relationship is a very credible and heartwarming picture of romance and friendship, mischief and responsibility. While some reality-obsessed curmudgeons may find the film's end unduly optimistic, it is a very well-placed happy ending, representing the never-say-die spirit of hope over adversity that keeps humanity alive. Ray's touch is very much evident in the screenplay and the visuals - many times, more is conveyed than said, with the use of beautiful visual metaphor or plain restraint, allowing the sensibility of the audience to fill in the gap. For this film he also composed the score, which is lovely and worth hearing on its own. All in all, highly recommended, and screw the snobs who regard it as a "minor film".

My recent watch of this film was on Criterion's blu-ray. Video-wise this is another amazing restoration (taking a 2K scan of the original negative) from RD Bansal / Pixion (Chennai). Kudos to them for making such a brilliant effort when so many classic Indian films, including some of the biggest box office blockbusters, look like complete shit on home video. Sometimes, the brightness levels seem very high, although there are no blown whites; it might have something to do with the intended look or the shooting conditions. The encode itself is excellent to mine eye, with no apparent digital artefacts. The mono sound is clear and robust and the music comes across quite nicely. I have not seen Kapurush, the short feature presented as an extra on this disc, but the other stuff is quite nice - a critic's video essay talking about the film, Madhabi Mukherjee reflecting on her experience, a Films Division short by BD Garga on Satyajit ray, which briefly looks at the shooting of Mahanagar.
Posted by Suresh S No comments: