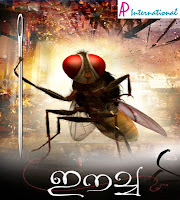 So me and my mum watched Eecha (the Malayalam version of this film) today on blu-ray. The movie was a blast!

First off, the screenplay shows that the makers had faith in the entertainment value of the story (Bloke is killed and reincarnated as a housefly with a super-long lifespan, proceeds to take revenge on the baddie that did the deed). I suspect other people would have extended the death of the "hero" up to the interval just so audiences would have their fill of conventional hero ingredients before the novel elements, or given the fly character thought monologues in the hero's voice and such like. Instead Rajamouli flicks off the look-ma-no-personality romantic lead double quick, giving center-stage to the REAL leads of the film, the villain Sudeep and the CG fly. Sudeep deserves every bit of praise that he gets for his performance in the film, and then some. Given that most of his scenes are basically him reacting to an imaginary stimulus, he makes the concept work fantastically. His expressions and body movements perfectly mirror the increasingly bizarre and OTT predicament of his character. He and the director appear to have had tremendous fun working out and executing his scenes.
As for the fly, while the computer graphics cannot compare with the level of detail seen in the (oftentimes boring) big budget vehicles of Hollywood, they fit in snugly with the context and style of the film, give the fly character great personality (more so than its human pre-incarnation), and more importantly are FUN. Rajamouli reminds me of director Shankar in the imagination shown in the design of the various action and effects sequences. When I first heard of the film and saw the trailer, I was skeptical that it would be a one-trick pony that would get tiresome soon, but I am glad to eat my own words. This is some of the most giddy fun I've had in recent times.

And now a few words about the blu-ray of the Malayalam version (apparently the Telugu version blu-ray loks even worse):
It hurts that the film doesn't look the best it could. I have not seen it theatrically so no idea how it compares, but as Sunny Shahran (the gentleman that supervised the authoring of this blu-ray, and one of the few people in the business that believes in keeping an open communication with the customers/fans) informs, the source files provided for the home video encode were hugely compromised in image quality. Crush is frequent and significant, causing appreciable loss of depth and detail, and the image often looks overcooked. Sound (on my stereo setup) is pretty good - it's not and was never meant to be a subtle mix, but it has great thump and there are several cool audio cues to supplement the visuals.
The "Making of", which has interviews with the director. producer and the visual FX lead, is decent, but more interesting is the "Progress Report" presented by Rajamouli, which gives a very nice insight into the production and scheduling of  the film, especially its post-production. But the special features really drop the ball in not having any input from Sudeep. Come on, this guy is half the movie, how could he have been ignored like this?
Posted by Suresh S 3 comments: