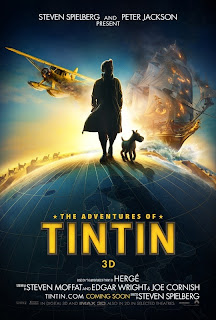 Just to clarify, I have no issues with the fact that a lot of kids and their daddies & mummies like this film. The Steven Spielberg and Peter Jackson team has given a very serviceable animated adventure flick to see and forget (until the next time your tyke insists on watching). But if all you're getting out of an adaptation of Herge's perennially marvelous and entertaining comic book series is a serviceable one-time watch, it indicates a certain lacunae.

To be honest, there will be some things inherently amiss with all motion picture versions of the Tintin comics. Much of the humor in the printed stories comes from the framing of the action, how a scene transitions from one panel to another, the joke concentrated in that concise staccato. Seeing those very actions expanded and articulated actually diminishes the fun. This was something that struck me even when I saw episodes from the Canadian cartoon TV series, arguably a far more faithful adaptation of the comics. The other aspect is that a still image, because it requires less repetitive labor and doesn't have to deal with the intricacies of fluidly transitioning from one frame to another, can be far more detailed than a moving image. Several of the larger sized panels from the comics feature lavishly depicted scenes of bedlam that reward you with fresh visual goodies as you cast your eye over each corner. Animated movies cannot afford to be so extravagant, since the frame is moving and they need to quickly set up areas of focus for the viewer. Also Tintin took advantage of many tricks of the comic book format, including the use of thought bubbles and halos reflecting the characters' emotions, that do not at all adapt well to cinema (check this panel as a slight example of what I'm talking about).

These are of course shortcomings innate to any “motion picture” Tintin. The new film in particular suffers from being done with 3D computer graphics (referring to the rendering style here, not the need for 3D glasses, since I saw it “flat” at the old-school Regal cinema). Now I've liked a fair number of CG rendered and roto-scoped adventure films, mostly those by Pixar and some pleasant surprises like Monster House and the super-awesome Rango. I have little to fault in the technical wizardry of the visuals, the noir-inspired lighting in particular, but the Tintin comics have a very distinct visual identity that hasn't translated well to the 3D animated format. In comparison to their bright primary colors and exquisite caricature expressions, the film's visual palate is rather bland – I specifically think it was a mistake to try to render the characters in a more “humanized” way, if you will call it that. In contrast, one of the most fun bits for me was the opening credits sequence where they showed a stylized cartoon version of Tintin set to a jaunty period tune from John Williams (who then goes on to deliver a generic Spielberg movie score for the actual film, why?).

The tone of the film is again mostly flat and lacking in the outright hilarity that makes the comics such a rewarding re-re-re-re-read. The jokes are far too few (Hot Fuzz's Pegg & Frost woefully underused as Scotland Yard's favorite bumbler sleuths)...and the script seems to specifically eschew the surreal and strongly flavored humor that distinguishes Tintin from other schoolboy's adventure comics – remember the scene where a hallucinating Haddock imagines Tintin to be a champagne bottle and tries to “uncork” his neck? Or the one where he gets drunk after they hijack the seaplane and insists on grabbing the controls, leading to their crash? All gone. The few highlights for me were Haddock's flashback of his ancestor's battle with Red Rackham and the hearty chase sequence in the second half of the movie, which successfully incorporate laughs with the thrills. The climactic action again disappoints, with Haddock and the villainous Sakharin seated in opposite cranes indulging in some Transformers-lite machine bashing. Ho-hum.

So these are my general impressions. Truth be told, I had pretty low expectations for the film as a Tintin adaptation and they mostly turned out right. You can definitely see it (hold your kids up as an excuse) but I doubt most Tintinerds will eagerly look forward to the inevitable follow-ups on this franchise. Incidentally if you want to see Tintin adaptations apart from the cartoon series, try this live-action movie called Tintin and The Golden Fleece. To be sure the budget isn't lavish, the actors wear obvious prosthetics to depict the characters, and the adventure is far more low-key than Herge's work, but in its limited way it does a better job of capturing that mix of action and wacky humor that characterizes the Tintin universe.
Posted by Suresh S No comments:

What frightens me is not the void itself but that I am no longer afraid to slip into it.
Posted by Suresh S No comments: 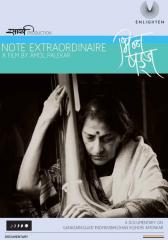 My knowledge of Hindustani or for that matter any classical form of music wouldn't be a thimble's worth but I appreciate some of the moods it evokes and have tremendous respect for the skills of the people that have dedicated themselves to the study and performance of such music. Kishori Amonkar, the subject of this documentary is someone I first heard of when I saw Govind Nihalani's film Drishti, for which she had done the score. Drishti as a film, the more I think of it, the more I feel it sucked, a lifeless Ingmar Bergman pastiche with some nice moody cinematography (Nihalani himself). But it had fine music, mostly on account of Amonkar's voice; there's an aura and resonance to it even a neophyte like yours truly feels captivated by.

I never got any albums by her because I didn't have a clue what to get, what compositions by her would suit the moods I have a preference for. But I found her interesting, having read of her being a temperamental person who transcended accepted norms and orthodoxies of technique, and who didn't indulge in the public relations exercises that a lot of renowned musicians do to keep their names abuzz.

Amol Palekar's documentary goes some way to giving an insight into the individual behind the name. The film begins with Amonkar talking about her mother. She waxes on about her mother's talent, her struggle to bring up Kishori and her 2 siblings after her husband's death, her philosophy towards music and its study, her manner of teaching the young Kishori and the corrections and criticisms she made, which shaped the singer we today know. There's a palpable emotional element during some of these conversations, revealing the depth of the guru-mother influence.

Palekar then puts the focus on Kishori's own evolution as a singer, her distilling of the training she received into forging her own path, and the development of her musical philosophy. She makes some very interesting remarks about how the rendition of a note is not an isolated element but weighs on its spatial and temporal relationship to the other notes, the overall composition and the mood it is trying to evoke. This is genuinely revealing stuff that takes this documentary from the domain of an ordinary biography to an exploration of an artist's thinking process. Full marks to Palekar for this kind of insightful reporting. Apart from Amonkar herself, there are conversations with her sons, who talk about her as an artist and as a mother, with other known names of Hindustani classical music (Amjad Ali Khan, Zakir Hussain, Shiv Kumar Sharma) who sometimes offer up more than superficial paeans to Amonkar's mastery, and with music critics who dissect the evolution of her style over time. This is a lovely portrait of an interesting artist that people who like Indian classical music will find very welcome.

The overall effort is quite laudable, but there are certain lacunae to Note Extraordinaire. Palekar is no Satyajit Ray, only intermittently realizing that interviews and conversations need not exclusively frame the talking heads. Amonkar's music is also not as prevalent in the background as it could have been. The volume levels for older performance excerpts are out of sync with the sound recorded for the documentary. Interestingly, on the DVD, you have 3 sound options – Marathi (original) or Hindi (voice-overs) with stereo sound, and a Marathi option with 5.1 surround. In my view, it's stupid to have a surround track for a solo performer documentary, but you have the option. Lastly, I believe it's plain cussedness that in this day and age, films presented in a widescreen (digital video) format are given non-anamorphic transfers that don't stretch correctly over flat-screen televisions. It is especially egregious since the makers have taken care to ensure that the provided English subtitles appear inside the film frame. It's better than UTV's Harischandrachi Factory DVD, where, if you don't grasp everyday Marathi, you couldn't watch the film in the original aspect ratio, on account of the subtitles going out of the zoomed in widescreen frame, but such carelessness spoils one's view of the overall worth of these off-the-beaten-track releases.
Posted by Suresh S No comments: