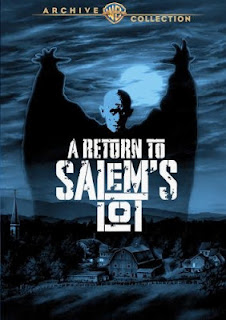 Return to Salem's Lot (RTSL) is one of those films that has all the stinky ratings at IMDb and tepid to scathing reviews at the few places that even bothered to review. But this little obscurity IMO deserves a lot better. OK, the title can be misleading, since apart from the setting of the town this one has little relationship with Stephen King's novel Salem's Lot or Tobe Hooper's tele-film version of it. Like most of Larry Cohen's shoot-on-the-run ventures it doesn't have spanking production values and the FX have to be taken with a voluntary suspension of disbelief. And with some wild swerves between gripping emotional drama and obvious camp it certainly can't be described as having a very consistent tone. But unlike most modern day 'epic' films where every sparse scene and nuance is stretched out like a taffy competition, this film is packed with so many cool concepts and dramatic ideas it can barely contain them.

The story has a scoop-seeking anthropologist Joe Weber (Cohen regular Michael Moriarty in another pleasing turn) going off with his problem son whom he has not seen in years to an inherited house in a quiet ancestral town where they can sort their issues...and yes, that place is Salem's Lot. In Cohen's version, the town has been entirely taken over by vampires, who constitute a society unto themselves, using humans only as servants. They are intrigued by the anthropologist and want him to write a chronicle, nay bible, of vampire civilization. In turn Joe's son is intrigued by the vampires and not sure if he doesn't want to become one himself. Cohen's pacy script presents his quirky and subtly humorous take on a vampire society with its peculiar lifestyle and its own attitudes towards the human race. He also presents the gripping dilemma that Joe faces, forced to stay and write for his son's safety and at the same time seduced by the prospect of writing a unique chronicle...and by an ex-girlfriend who has never aged after he left.

Thus far is a film that's plainly brilliant in its setup and I would have loved to see a greater progression in this vein. But after that Larry's script seems to have run out of ideas or time and he quickly reverts to a showdown where Joe teams up with a crusty old vampire slayer (played by maverick movie-maker Sam Fuller, and there's also a cheeky reference to his film Pickup on South Street) who just happens to have blown into the town. There occurs that same abrupt change of tone that happened in John Carpenter's They Live which, beginning as this quietly unsettling SF thriller, suddenly veered off into high camp territory with the scene where Roddy Piper decides it's time to 'kick ass and chew bubblegum'. To it's credit, RTSL goes for much longer before the camping grounds are laid, and even after that, retains a good modicum of interest.

Thus while not entirely streamlined or satisfying, RTSL is a film with several points of interest and IMO one that deserves a better appreciation than it has thus far received.
Posted by Suresh S No comments: 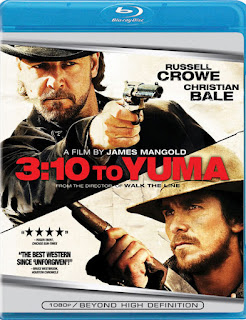 One consequence of the success of the Sergio Leone – Clint Eastwood films (in themselves inspired by Akira Kurosawa's itinerant sword-for-hire character, Sanjuro) is that the Western genre has become almost synonymous with The Man with No Name. But cowboy films were made before the archetype was crystallized, and 3:10 to Yuma harks to those Westerns of yore, where the protagonist had ties and cared about values of family and decency.
Rancher and ex-soldier Dan Evans (Christian Bale) is deep in debt and needs to hold out till the rains come in and save his cattle (and his family consistting of a wife and 2 young sons) from starvation. After coming across the gang of outlaw Ben Wade (Russell Crowe) he does his bit in aiding Wade's capture and for the sum of 200$, takes on the job of being part of an escort to load the prisoner onto the titular train to Yuma prison. With Wade's gang desperate to rescue their leader the job is dangerous, but Evans needs the money to keep afloat till fate rules in his favor, and even though by nature a cautious man, is willing to risk it for family's sake. Christian Bale approaches the part with his trademark sincerity, while its underdog nature saves it from the annoying pompousness that many of his other roles have suffered.
Wade on the other hand is a creature embracing ruthlessness and whimsy. I have not seen the previous film version where actor Glenn Ford played the role, but imagine if you will, a cross between Robert Mitchum in Cape Fear and Anthony Hopkins in Silence of The Lambs. Crowe is an actor whose interest or lack thereof in a part is generally palpable, and it is easy to see he is having a good time here. While his murderous cronies do what they can to rescue him, Wade psychologically teases his captors, probing the chinks in their armor, alternatively giving vent to his own psychotic leanings.
While there are several other supporting members in the cast, the crux of the story is the interplay between Wade and Evans. The former is amused by the latter's humble courage and desire to do good by his family, and it is suggested, although not in a hugely credible sense, that an emotional chord is struck in Wade's mind. It seems odd and contrived that a veteran vicious criminal like Wade could be so moved by Evans' decency, but not in a manner that hampers one's enjoyment of the film. The story moves with the precision of a well-oiled timepiece (which means you never look at one while watching) and absorbs in its character moments The action sequences are equally immersive, thrilling without losing coherence. It also helps that the film has solid production values and a gorgeous old-school visual texture.

A few words about the blu-ray:
Lionsgate (who is distributing this in both the US and the UK, so one assumes these discs will be identical) has delivered a truly knockout release of the film on blu-ray. Although the VC-1 codec has in recent times been superceded by MPEG-4, this film showcases that it too can produce amazing HD encodes. Gorgeous, palpable textures, solid depth and color, I cannot imagine the film looking much better. While I am certainly not getting the most out of the 7.1 lossless PCM track, it boasts enough depth and muscle on my stereo system to suggest that surround setup owners will delight in its audio-scape. There are a good number of featurettes on the film's making, an audio commentary and an interview with auhor Elmore Leonard, whose short story served as the basis for the film.
Posted by Suresh S No comments: