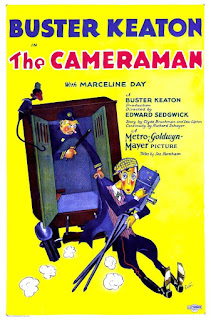 Joseph Frank 'Buster' Keaton was the silent comedy contemporary of Charles Chaplin and a looming influence on cinema's greatest action-comedy stars, like Jackie Chan. Where Chaplin tried to appeal to your sentiment, sometimes quite mawkishly, Buster, popularly called 'The Great Stone Face' for the unruffled expression he maintained throughout his movies, was more about pure comedy and outrageously risky stunts. In 1928, beset by the spiraling cost of making his films and the impending juggernaut of the talkies, he gave up his independent studio and signed on with Metro-Goldwyn-Meyer (MGM). The Cameraman was the first film Buster made for his new employers, and ironically is regarded as his last great film.

Buster enters the picture as a street photographer peddling Tintype portraits. During a street parade he meets and is immediately attracted to Marceline Day, who works for a newsreel studio. To continue the acquaintance, Buster decides to become a news cameraman - he buys a beat-up old hand-crank and looks to freelance at her firm. He is initially quite inept at handling the camera and the boss dismisses his work (this is a bit of an inside joke, since the montages Buster makes are rather interesting surreal trips making use of double exposures, and varying the speed and direction of the action). But with Marceline's sympathetic goading, Buster persists; he also gets to court her in some amusing escapades at the local swimming pool (which the Mr. Bean TV series gleefully ripped off). His big moment comes when she hands him an exclusive tip about a gang war in Chinatown. Buster rushes off and covers the chaos with his customary athletic grace and daredevilry (one shot shows him cranking the camera even as the platform he is standing on comes crashing down). A few misunderstandings get in the way, but Buster finally wins the girl and his place as a bonafide cameraman. The Cameraman is  a notch below his earlier productions like The General and Steamboat Bill Jr in terms of inventiveness and sheer chutzpah, but still a highly watchable and entertaining Buster Keaton picture with several memorable visual jokes and thrills. 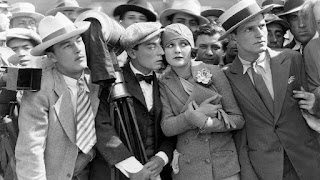 Apparently, there was a bound script with contributions from a battery of house writers at MGM, which was against Buster's usual style of having a more diffuse narrative which they would then fill up with on-set improvisation, taking inspiration from the locations and props. But the difficulties of shooting on location in New York gave him the opportunity of convincing young studio head Irving Thalberg that he could make a more efficient picture if he were allowed to throw away the bound script and work with his own team. Sadly, despite the film's success (MGM apparently used it as a training film for their comedy division), this was the last time Buster got such a break, and his growing dissatisfaction coupled with domestic troubles and alcoholism led to his being marginalized as a film-maker. It was only much later that his mastery of visual comedy was rediscovered by film aficionados and he began to get the respect he deserved. 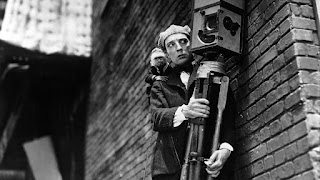 Mr. Holmes may not be part of the Arthur Conan Doyle canon, but it is a heartfelt tribute to his famous detective, and a moving meditation on old age and senility. 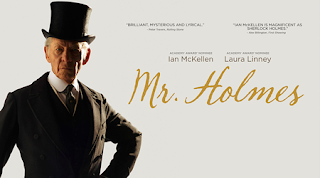 This film's Sherlock Holmes (Ian McKellen) is a nonagenarian living out his days with his bees in Sussex, cared for by a widowed housekeeper (Laura Linney) and her precocious young son Roger (Milo Parker). Fighting to counter his increasing forgetfulness (he scribbles people's names onto his shirt cuffs to remember them), Holmes is desperately looking at alternative medications to slow down the erosion of his intellectual edifice (the beekeeping originates from his quest for "royal jelly", the foodstuff generated for the queen bee). While otherwise prickly and sardonic, he seems to appreciate the company of the fan-struck and eager-to-learn Roger, developing a strong bond with the boy. Holmes is also trying to write down the 'true' story of his last case before it is forever lost from his mind.

Folks looking to get their fix of the detective from Doyle's stories or from any of the recent spinoffs may be disappointed here. After living through two world wars and the atomic bomb, Sherlock Holmes is an older man, far more fragile and vulnerable, and this is a story of his twilight years. Conan Doyle's sleuth was once famous for saying "Crime is commonplace, logic is rare." In this tale of lambent retrospection, Holmes finds that a heartfelt human connection is rarer still.

It is to the credit of the script (Jeffrey Hatcher, based on the book A Slight Trick of the Mind by Mitch Cullin) and Ian McKellen's performance that this sentiment is conveyed with minimal pandering - the "crisis" towards the end has a slightly manufactured feel, but I'll let that go because it was so good till then. The pastoral setting (interspersed with flashbacks to London with a relatively younger Holmes) and poignant musical score add to the impact. This is a wonderful coda to the celebrated existence one of the most beloved fictional creations of all time.