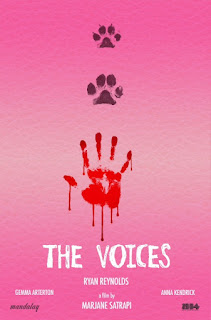 Deadpool may have garnered the hype and box office, but in my opinion this little black comedy from 2014 is more entertaining and a better showcase for Ryan Reynolds' abilities.
Unless you go into the film absolutely blind, and not likely for long even then, it becomes evident that Reynolds' character is a "special person". Like the munchkin lead of The Lego Movie, Reynolds believes "Everything is Awesome!", as he goes about his job at the bath fixtures company (with its dazzling bright pink aesthetic on everything, including workers' overalls, forklifts and cartons). He enthusiastically participates in setting up the company party and tries (too) hard to attract the attention of the office hottie (Gemma Atherton). He also regularly visits a state psychiatrist who constantly badgers him about taking his medication (uh-oh). And he has a dog and cat, Bosco and Mr. Whiskers respectively...who he talks to...and who talk back to him.

It's the curse of the under-confident person, I get discomfited by films / TV series where the humor is at the expense of someone's embarrassment, which is why I did not see more than the stray episode of Wilfred (in which the dysfunctional lead character sees his neighbor's dog as an anthropomorphic talking entity), but I can see how it could have been the inspiration for Reynold's interaction with his chatty friends - Bosco represents the angel archetype telling Reynolds he's "a good boy", while Mr. Whiskers is, like many cats, an unapologetic A-Hole. The film gets more drama when Reynolds ends up accidentally(?) murdering the hottie, and tries to (ahem) bury the issue by taking home the body, chopping it into little bits and keeping her head in the refrigerator; as it turns out, that's only the start of a chain of events.

What differentiates The Voices from other bizarre comedies is that it's not content with drawing easy giggles. Reynold's character may be a Norman Bates stereotype (there is even a deliberate wink to that inspiration), but he is developed with sensitivity and dimension, and the script succeeds in making you feel for this murderous bumbler. There is also intelligent use of visual cues to differentiate between Reynolds' fantasy world and reality.

There are some stumbles, like when a literal conga line of Reynolds' colleagues come snooping around his home instead of alerting the police even after they have uncovered enough indications to raise the flag of suspicion, but the film does not overreach its grasp and I found sufficient charm and that magic blend of humor and pathos to overlook these deficiencies.
Posted by Suresh S No comments:

Kaul (The Calling) - Aadish Keluskar's debut feature in Marathi is a brilliant existential horror film with some of the best use of sound to create mood I've heard in a film since a long time. I saw it twice at the cinema, the second time in immersive Dolby Atmos. I pray it comes out on BD/DVD so whoever that is interested in such films can get to watch it.
Aligarh - After the brilliant and underrated Dil Pe Mat Le Yaar, Hansal Mehta and Manoj Bajpai join forces again to give a powerful drama of a man unfairly persecuted by society for the sin of being different. There are flaws yes, but damn it, this is a sincere and moving effort and deserves to be on your watchlist.
Budhia Singh - Born to Run - Manoj Bajpai is on a roll with this year's releases. In BS-BtR he is not the titular character but plays the equally important role of the coach determined to make a marathon champion of the child Budhia, even if he must resort to highly unorthodox and questionable methods of training him. Effectively portrays the other side of the rah-rah sports film.

Ghayal Once Again - Not great, but surprisingly entertaining, with a script that makes The Matrix look like kitchen sink drama, retro-badass action and hilarious ineptness. I especially enjoyed the audacious extended chase sequence in the first half of the film, genuinely well done. Recommended for fans of 80's style action dramas.
Mohalla Assi - Not officially released, but you can find it on the interwebs. A cynical satire on Benaras by Chandraprakash Dwivedi that takes on too many "issues" and meanders more than needed, but has some good moments and is notable for the most uncharacteristic Sunny Deol performance ever.
Fan - This one turned out better than expected, especially in the first half. Post-interval it bloats up with increasingly preposterous bait-n-chase sequences and very dodgy script machinations. But like with Chennai Express, SRK seems to take a special delight in making digs at his own legacy. No songs is an added plus.
Ventilator - Rajesh Mhapuskar's Marathi film starring Ashutosh Gowariker struck a strong chord with its identifiable dramedy of the family commotion that occurs when a relative is admitted in hospital. Runs too long with an exhausting series of emo-moments towards the end but worth watching once if you like the Hrishikesh Mukherjee kind of cinema.
Akira - I can see the eyes rolling among some of you, but I waspleasantly shocked  to see a Murgadoss movie that doesn't have an extended flashback sequence so cloying and rancid it makes you want to stab your eyes out. Also, I have a soft corner for Sonakshi Sinha who I think is one of the promising actors of today, so catching her in a 'hero' role was a thrill, even if the action sequences were shot quite haphazardly. Anurag Kashyap as actor was fun too, a lot more than as the director of Raman Raghav Thoo.

Pink - Pink is actually good...until Amitabh Bachchan walks in and completely upends the story, taking attention away from the credible and sympathetic female cast. The wang-wagging courtroom drama was abysmally preachy and screechy and poor Piyush Mishra got the most thankless part.
Airlift - It arrived on the marquee in the same weekend as a bunch of interchangeable randy Tusshaaar Kapoor movies, and was a comparatively decent experience, but when I reflect on it, very generic in construction and quite forgettable.
Kahaani 2 - Better than the previous one IMO, but again dragged down by an ass-breaker running time (130 min), excruciatingly detailed flashbacks, caricature bad people and let-me-tell-you-what-to-feel background music...and of course the up-its-own-butt twist ending.

Raman Raghav 2.0 - A terrible experience, a hodge-podge of contrived scenes and faux-edginess (Anurag Kashyap-ness?) with almost no good element that wasn't lifted from elsewhere.
MSG: The Lion Heart - yeah yeah, I know a bunch of you are going to say "What did you expect?" But I loved the first MSG film for its incredulity and complete absence of sense of proportion. This one began in a promisingly hilarious fashion but got bogged down with a sluggish and annoying flashback that lasted the entire length, with a message to wait for Part 2, grr


STUFF I NEED TO SEE
Visaranai (Tamil), Kapoor & Sons, Dangal...let me know what else I missed out on.
Posted by Suresh S No comments: