The Czech seem to have a way of making understated human dramas from genre tropes. Jerzy Kawalerowicz's Night Train was about the search for a murderer hidden somewhere on a packed train. Jiri Weiss' 90 Degrees... is a petty crime noir. In both cases, the suspense element is tamped down in favor of being a stark character study. 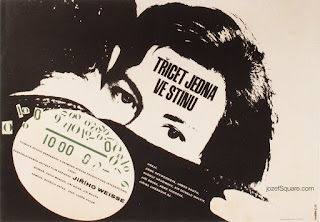 Weiss' film begins with a documentary coverage of people spending their afternoon break. One of them is Alena (Anne Heywood), who we see sunbathing. She is stared at by a fruit-eating youth and later a chubby middle-aged bespectacled man who seems out of place in the sunny outdoors in his buttoned up suit. We see this man again later - he is Kurka (Rudolf Hrusínský, famous as Juraj Herz's The Cremator), a supplies auditor come to take inventory at the shop where Alena works as an assistant. Kurka is an archetype bureaucrat, a stickler for rules, devoid of humor or affability; he has an almost slug-like persona. Kurka leads a suppressed life, estranged from wife and son. Flustered by even casual personal connect, his interaction with the world seems to be primarily a form of stock-taking, be it people or goods.

Alena on the other hand is a bundle of emotions. She is a good worker but has been involved in a serious affair with the store manager Vorel (James Booth), and in consequence shielded his pilfering of a dozen liquor bottles from the store, which could come to light during Kurka's inventory. In the film's most forthright noir sequence, she and Vorel hurriedly work to replace the missing bottles during off-hours, borrowing money to buy the liquor and making their way through a hidden back entrance (this is tellingly juxtaposed with the scene of Kurka lying sleepless in bed, reflecting on the sterility of his existence).In their scenes together, Alena and Kurka are an excellent study in contrasts. He is embarrassed by her attractiveness and she is inhibited by his dour nature. Early on they are placed in the cubbyhole storeroom, checking stock as they stifle in the titular heat. There is an atmosphere of sexual tension, especially when Alena accidentally spills coffee over Kurka's trousers and insists on wiping off the stains, kneeling by Kurka as he stands abashed in the closed silence.

Vorel is the third pivot of the script. He is seeing Alena but he is also married with children (in artfully inserted flashbacks of their private moments, he repeatedly talks of divorcing his wife, but seems unable to actually do it, and Alena is also unwilling for the arrangement). In an accident during the inventory, it is revealed that his sleight-of-hand is not restricted to the surreptitiously replaced bottles; he has been playing a more systematic swindle game. When suspicion falls on Alena for the theft, he is happy to let her take the blame, arguing that his punishment would be more severe and would affect his family. When she later meets an unhappy fate it is suggested that he has discarded her like an old doll. But he must now contend with Kurka who suffers the guilt of having indicted her for another's crime. While some of the symbolism is on-the-nose, 90 Degrees...  does not descend into soapy melodrama, remaining an incisive observational play.

The film was made, unusually, as a British-Czech co-production with actors from both countries. Separate versions were made for each language (the final edit of the Czech version was supervised by Weiss himself and is about 10 min shorter than the British cut). Unlike most native Czech films, this one was shot in 2:35:1 cinemascope, although I didn't find its use of widescreen particularly justified.
Posted by Suresh S No comments:

When it comes to Dracula, you could say I'm something of a fan. I first read Bram Stoker's soaring horror adventure novel as a kid and have returned several times to enjoy at least the best bits. Then there were the many movie and TV adaptations, of which I have previously seen:

There's also the Orson Welles radio drama adaptation, the interesting BBC radio pastiche Sherlock Holmes vs Dracula and that's not including the various sequels and spinoffs, and any vampire movies not specifically based on the Stoker book. With so much Drac-Koolaid consumed, it would take something out of the ordinary for another Dracula adaptation to make an impression. I was at the outset somewhat skeptical about the new mini-series from Messrs Gatiss and Moffat. I had grown disillusioned with their contemporary Sherlock series after the first season, preferring instead to watch Elementary, even though that one grew stale by repetition. But the sumptuous period production values, and the promise of Dracula as a ruthless monster rather than a wimpy lover made me give in. 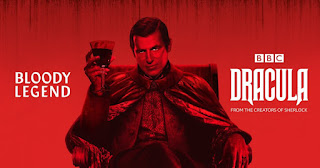 Dracula (2020) begins at a place where you think you know where you are, with an enervated Jonathan Harker recalling the harrowing events of his time with the sanguinary count, but soon shows that it is happy to jigger around and throw in new elements to surprise even the jaded Dracula fan. Such revision is of course a two-edged sword, but at least across two of the three episodes, the writing provides a brave and fun re-working of Stoker's novel. Sister Agatha who is but a bit player in the book is now a major character that takes on Dracula himself in a war of wit and tactics. Other major characters are modified, truncated or eliminated as per the script's demands. The iconic chapter of Dracula's preying on the Demeter ship is rendered like a tense variation on Agatha Christie's And Then There Were None.

The third and final episode is probably what will divide most die-hard fans. It involves a major transition that may or may not work. While I feel it could have been done better, I was certainly not put off by the shift. The conclusion draws inspiration from both Murnau's 1922 Nosferatu and Terence Fisher's 1958 Dracula and even in its not-quite-satisfactory way, manages to pull off a different spin on the typical "destruction of the vampire" climax.

I have spoken of boldness of the writing, but of equal importance is the excellent lead acting talent, mainly Claes Bang as Dracula and Dolly Wells as Sister Agatha. There is a constant stream of trendy quipping and dark humor, but the character of Dracula is almost never trivialized as a threat, which is crucial to the lasting power of the original work. The scenes depicting period Europe look excellent in the way that a high-budget series does, with sweeping vistas, moodily lit interiors and gorgeous dream sequences. Dracula doesn't skimp on the blood, but doesn't overdo it either, concentrating on being a character-driven adventure saga than a gore-fest. Given the way they ended this I doubt there's any real scope for a second season, but this was worth my while, and possibly even a re-visit. Pass me some more of that red stuff.
Posted by Suresh S No comments: