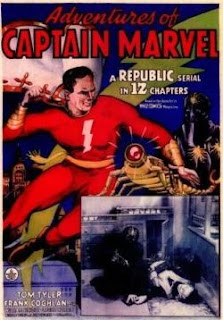 Of course when I should have been working I binge-watched through the remaining episodes of the 1941 movie serial Adventures of Captain Marvel (AoCM). Still considering that apart from the pilot, all episodes are 15min each, that's only a couple hours lost. Plus the time to write this up :p

I can definitely see why DC lost their shit and sued over the original Captain Marvel comic book character. Apart from a magical origin (when the Tintin-like Billy Batson is given a boon to turn into CM by uttering the word "Shazam!"), the Superman parallels are unmistakable - the Capt has super-strength, is invulnerable to bullets and can fly. The movie serial also has its Lois Lane and Jimmy Olsen characters in Batson's colleagues Betty Wallace and Whitey Murphy.

The serial follows an archaeological expedition into a Valley of Tombs in Siam (although it could have as well been Egypt, considering how vague the setting is). The very doings that give Batson his CM power also reveal a Golden Scorpion with a half-dozen lenses which when combines make a ray that vaporises living beings and turns base metals to gold, so yep every megalomaniac's dream. The megalomaniac here is one Scorpion who hides behind a most cumbersome robe and mask. The expedition members decide to split the lenses among themselves for safekeeping but the Scorpion is determined to track and hunt them down. Every episode till the finale ends on a cliffhanger note.

Unlike the ethical codes followed by more modern heroes (the non R-rated ones, at least), CM has no qualms about gunning down unarmed men or throwing them off the tops of cliffs and buildings. Separate actors play the parts of Billy Batson (Frank Coghlan Jr.) and Captain Marvel (Weightlifter-turned-actor Tom Tyler, whose buff looks make him quite convincing and he gets to lift and throw a lot of folks or their dummies). The visual effects are pretty good for the time and budget. Even when the technique is obvious, like the use of a full-size dummy along a pulley system, there's a special thrill to the flying sequences.

AoCM is a nice harkback to the simpler goofier kind of superhero adventure, recommended mainly for the Golden Age nostalgics.
Posted by Suresh S No comments: