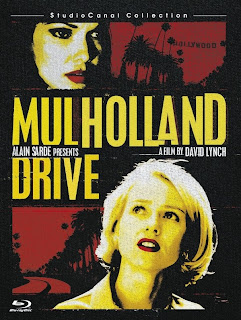 I had seen MH long long ago, and considered it at the time an arbitrary and pretentious movie whose critical acclaim hinged solely on its being made by David Lynch. The blu-ray was therefore an experiment in re-evaluation, to see if I had by chance missed the significance of the film.

Turns out, I had. I am still not ready to list this among my favorite films, but there's definitely a twisted dream logic to the proceedings that unlocks along with the opening of the MacGuffin blue box in the film. I cannot describe the film in great detail here for fear of spoiling it for people that have not yet seen it, but it starts off as a neo-noir mystery thriller centered on the two female leads (Naomi Watts and Laura Harring, both smoldering) with what seem like barely connected detours featuring other characters and situations, but in the last 15-20 min of the film, Lynch pulls off a coup of reversal that has you rethinking on all you have previously seen. And I imagine this will induce greater re-watchability to the film even if some individual events (the diner episode and the espresso episode in particular) still seem contrived in their weirdness. It helps to know that some of the feeling of disconnect and paucity of character development possibly stems from the fact that MH was first developed as a TV series, and after the studio developed cold feet over the pilot, re-purposed with additional funding from Studio Canal as a standalone feature film. Lynch is not apologetic over the loose ends because as he proposes, dreams have lots of loose and dead ends, and the film operates on a dream logic.

Studio Canal's blu-ray gives a solid presentation. The video has some significant amount of manipulation in terms of light exposure and softness so it's not reference material, but generally looks very good and assumedly faithful to the director's intentions. The soundtrack is quite brilliant, both in terms of sound effects and Angelo Badalamenti's atmospheric score. I am a little annoyed about the lack of English subs on this release because one problem is that the dynamic range of the audio is VERY HIGH, meaning it can go from barely audible whispers to room rocking crash-bangs, making it necessary to adjust the volume during playback, not convenient. There are a bunch of extras, with behind-the-scenes footage during the shoot, as well as various film-makers waxing on the greatness and importance of MH (* These extras are present on the digibook release of the film, but may have been removed from the armaray case re-issue).
Posted by Suresh S No comments: 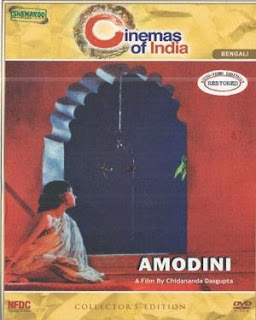 Yesterday, I watched Amodini by Chidananda Dasgupta, contemporary to Satyajit Ray and a renowned film critic and writer, and also father to Aparna Sen (for this generation I should probably say grandfather to Konkona Sen). The film is a fable/satire on the problems created by the caste system, wherein marriage becomes so difficult to arrange within a given caste, that women are forced to marry old men or even infants. The titular character is the haughty daughter of a wealthy zamindar, about to enter into the rare chance of marriage to a (comparably) young man, when it turns out that the man in question has abandoned the ceremony. She is then hastily married off to the 15 year old servant boy Pundu, whom she kicks out of her chamber. Pundu goes away, and Amodini must now face the social challenges of being an abandoned wife. In the meanwhile, the film gives us some additional episodes on the issues created by the shortage of eligible high-caste men, including one where an aging husband actually demands bed money from his young bride to consummate the marriage. After many years, Pundu returns, now a rich man with a new bride. Does Amodini go back to him, and does he accept her forms the rest of the story.

While the story had potential as a humorous satire, a lot of it falls dramatically flat for me, raising neither laughter nor concern for the characters. Couple that with lots of bad acting from the cast (or should I call it inadequate direction from the maker?) and it failed to be more than a one-time watch. In the film's favor it is definitely good looking (cinematography by Madhu Ambat, who did some fine work in South Indian movies) and also has some lovely classical based music score (by a CR Chowdhury).

NFDC-Shemaroo's DVD gives an anamorphically enhanced 16:9 image of the film, soft but colorful. I am sure it trounces the previous release from MAX. The soundtrack is clean and distinct. I seemed to hear some unnecessary stereo panning and echo elements sometimes but since I am having some issue with my amp, I can't assuredly say the disc is at fault here.
Posted by Suresh S No comments: