Of B-movie maven Sam Katzman, Charles Schneer said that he "Knew everything there was to know about making a movie. He was a very enterprising fellow, and was enormously intuitive. But, he was a very tough taskmaster and a real skinflint... all his input was negative. He never contributed anything positive. I would suggest an idea, and he would knock it down. I would argue with him, but I never got very far. He wouldn't say: 'Do this instead of that.' He would only say: 'Don't do this'." 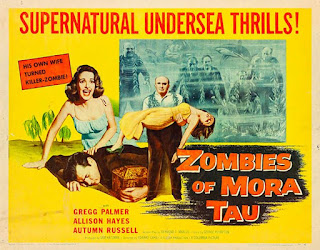 Katzman was a power player in the low-budget movie business that produced movies for a number of studios  constantly feeding product to small theaters across the United States. Sometime in the mid-50's he targeted the teenage and adolescent crowd with science fiction tinged horror fodder like Creature with the Atom Brain (1955) and The Werewolf (1956). While not exceptional cinema, they were quite decent as low-budget entertainment, capturing a certain zeitgeist of the atomic era. 1957's Zombies of Mora Tau is another interesting yet not entirely successful entry from Katzman's stable. It differs in some important aspects from previous zombie movies like White Zombie and I Walked with a Zombie, and in some ways presages George A. Romero's Night of the Living Dead as well as the Italian Zombo-calypse movies.

Zombies of Mora Tau begins with a bang when the automobile the leading damsel is being chauffeured in runs over a figure standing on the road. The scene is supposedly set in Africa where the lady is going to stay with her grandmother, but there are almost no cultural landmarks and not a single native African to give credence to that claim. Anyhoo, despite her protests the otherwise kindly driver refuses to stop after the "accident", remarking that he did not hit a man but "One of THEM!". When she finally reaches her grandmother's home, she finds that gramma (Marjorie Eaton) has similar notions, and that the stories she'd heard as a kid about the "dead but not dead" are actually serious beliefs among her folk. 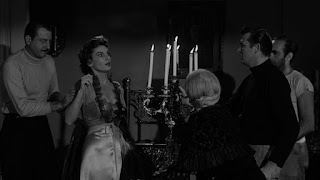 In parallel, a ship expedition with a drunk captain (Joel Ashley), his saucy wife (Allison Hayes) and a hunky diver (Gregg Palmer) plans to explore the wreck of a 19th century sunken ship to recover a casket of uncut diamonds. But when they near the site of the wreck, they get some uninvited boarders who don't seem too troubled about getting shot or drowning. The survivors jump ship and take shelter at Grandma Eaton's place where she tells them about the undead sailors cursed to forever guard the booty of diamonds against anyone that came to take them. Of course, they think gran's off her head even if what they have seen can't be explained away.

Moonlight shenanigans ensue - damsels are carried off, zombies rise from their coffins, and our leading cast must fight for their lives. While the zombies are created by a curse, they are not under the direct control of any witch-doctor or mad scientist unlike previous movies, and more importantly, they have the ability to convert other humans to zombies to add to their number (how is not clarified - it seems to involve some ritual in their crypt, not just a chomp of flesh). This brings them closer to the zombies in NotLD than White Zombie. We also see sequences of them attacking the divers underwater (done with a gauzy filter and projected bubbles) prefiguring the memorable Zombie vs Shark scene from Lucio Fulci's Zombie Flesh Eaters.

While there are fascinating elements in the script, Edward L. Cahn's direction is pedestrian. Marjorie Eaton's performance plays to the rafters, more Old Dark House than the subtlety called for. Visually too, there are not many striking moments - a Val Lewton protege or a Mario Bava could have worked wonders with the material. That said the film is only around 70 min long and doesn't allow much time for one's interest to flag.

A few words on the blu-ray from Arrow Video's set of Sam Katzman movies:

Video-wise, this is a very decent HD transfer for a vintage low-budget movie with good contrast for the numerous nighttime scenes. The mono audio is clear if limited in immersion. Supplements include a Kat Ellinger commentary on the film (which was pretty decent, although she is a lot kinder to the film than I felt) and a Josh Hurtado video piece on genre transformation in Katzman's films.