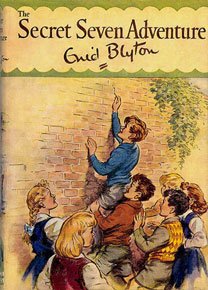 I started reading a collection of Secret Seven (SS) books. You can stop berating me for my childishness and lack of refinement because I couldn't care less. But I must say I'm a bit mystified as to why Enid Blyton started this series. Is it because she thought that her readers would go through only a certain number of Famous Five (FF) books a year? Did she see it as a chance to re-recycle FF plots with a different set of characters?
Talking 'bout characters, SS loses big time, at least so far as the first book I read goes. FF's characters were fairly distinct: Julian was the leader type, George was a tomboy girl, Anne was the girly girl, Dick was...well...a dick and Timmy was a dog. Here, apart from the dog, it's rather hard to tell these poltroons apart. One character is described as someone who "giggles a lot". Meh.
As a kid one of my favourite parts in the FF books was the description of the food: All those lovely meat sandwiches and jam tarts and sundry other items seemed so exotic and delicious. The food bits are still my favourite.
Posted by Suresh S No comments:

Oh for some randomness

Oh poo, this blog is becoming what I feared it would, a collection of officious reviews. The spontaneous writing and alternate forms of expression bit has pretty much died out. I'm bored really, and the act of keying out stuff has in general lost its charm. I've reached a stage where I don't think I can actually write anything with some creativity unless I go out on a trip and that seems very unlikely in the near horizon. This is what you get when you have too many avenues of consumption and no inner discipline.

Been slowly making my way through Nausea by that Sartre bloke. I generally read it in the bus on the way home from work, and sometimes, especially when I've had a tiring day, I feel like putting my hand into the pages and boxing the protagonist's ears. Now that I've also picked up Dirk Gently's Holistic Detective Agency (Douglas Scott, he of the overrated Hitch-hiker's Galaxy fame), I suspect the Nausea will be retarded even further.

So what else am I going to spew out in this post? Why, movie reviews of course - nothing else in particular is happening that I can tell you about without having to kill you.

I've been watching through the 1st Season of M*A*S*H* (hereby referred to as MASH), the series that used to air on Star TV as a daily when I was in college. In those days, by the time I got around to watching this serial regularly (or as regularly as I could - For those fool enough to do Science for graduation, it was extremely difficult to be home by 5:30pm when the show used to air), Trapper was already out, replaced by BJ Hunnicutt. I'd got the first 2 seasons on DVD a long while back but only started watching them now. Good fun really, and while the plots are variations on a limited number of themes, the variations are good enough to not feel shortchanged. Alan Alda is fucking awesome, he was a born star...he was only in his twenties when he started working his charm in MASH! Fuck, what was I doing in my twenties?

Darwaza aka The Door, an old creature feature by the Ramsay brothers. This was probably one of the first actual supernatural horror films in India. The plot would be quite familiar to anyone who has watched any of the quintessential Ramsay films - ancient curse haunts a family, which can only be tackled by going back to the ancestral mansion and tackling a rubber-masked ogre that hangs about the premises. This one works reasonably well within its scope. There are far fewer detours to odious comic relief sequences than in later Ramsay efforts and the proceedings are fast-paced and cheerfully absurd. Somewhere in this chaos you have a scene pinched from Psycho, a mangled version of the Yojimbo theme...what's not to like? 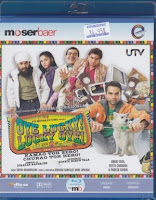 Oye Lucky, Lucky Oye I've of course seen this movie long ago and liked it. The repeat watch was after I got the blu-ray version. The film remains fun as ever, although yes, it could have been further trimmed. It looks great on the hi-def format. Apart from the harshness of the shadows, this is a great transfer with pleasingly sharp detail and strong colors. Sadly no other Hindi movie I like is available on blu-ray with anywhere as strong a presentation. Companies like Moser Baer and Yash Raj are so not what the nascent blu-ray market in India needs.

This afternoon I saw Sherlock Holmes and The House of Fear, one of the Universal Studio films with Basil Rathbone and Nigel Bruce as the Baker St. duo. I solved the "mystery" within 10 minutes of firing up the film and the rest was merely a waiting game. But at less than 70min the film doesn't ask too much of you and I like the old skool atmosphere of these films. Rathbone remains a treat to watch as well.

Night of The Demons was a reasonably enjoyable 80's horror flick. The plot is only a slight variation on the first Evil Dead film - On Hallow's Eve a bunch of typical horror movie teens come to party at an isolated shack built upon a burial ground. One of them gets possessed by a demon and predictable consequences follow. This film lacks the manic energy of ED or the charm of Fright Night, and there's a ridiculous amount of talking that occurs, but still, it's executed with a certain amount of skill, and the presence of all the expected elements of the 80's creature feature - good gore effects, gratuitous nudity (tits galore, even a spot of pubic thatch), utterly racist ethnic stereotypes and a rock soundtrack - make it worth the watch.
Posted by Suresh S 2 comments: