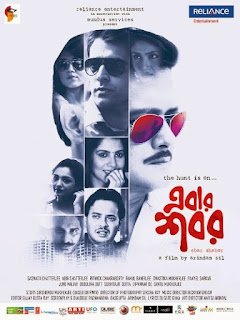 While ostensibly a murder mystery with a trademark eccentric sleuth (the title itself is a play on the previously released Abar Byomkesh), whodunit (and how) is the least of the script's concerns. Physical investigation of the crime scene and accessory locations, forensic studies, circumstantial evidence - the tools of the normal detective story - barely come into play here. What we have is more in the vein of character exploration. By a series of interrogations, with some subjects repeatedly questioned in the light of new information, the film is more concerned with unraveling the facets of the ensemble cast, including the victim herself. To be sure this is no L' Avventura style meditation on the modern human condition, not by a thousand miles. But the film is not ashamed of its simplicity and sincere enough to its premise to make it worth the sitting through, at least for me.

Fans of Bengali sleuth movies will find amusing meta-trivia in the casting. Saswata Chatterjee, who previously played the Watson-esque parts of Topshe in the Feluda series and Ajit in the Byomkesh Bakshi films, is cast as Police Detective Shabor Dasgupta, while Abir Chatterjee, the new face of both Feluda and Byomkesh at the cinema, plays a pivotal supporting role. Shabor's approach to questioning his suspects is to first provoke them by accusing them of the crime, and then draw out the facts he wants. He has a deadpan demeanor, and is egoistic and abrasive (thankfully not so much as some of the newer portrayals of Sherlock Holmes), but can be compassionate on occasion and is not averse to putting aside the rulebook.

Typically, the supporting characters in a detective film tend to be flat, hastily scribbled out caricatures that at various points fulfill the role of potential suspects (complete with shifty glances and sweat-lined brows). This film is more interested in giving us a rounded portrayal, doling out information in select dollops till we get a more complete picture of each person. It also helps that the actors are very good in their parts. There are no deliciously complex layers or noir elements, and the writing could definitely have been better, but the overall effect of this approach is pleasant and engaging.

You could argue that as a detective story it stumbles, because apart from the repeated QA sessions there is no real detective work being done - the actual culprit would likely have been nabbed with much less backtracking if some physical evidence was also analyzed. The chase scenes seem like last minute additions, indifferently shot and making little sense in the context. The overall effect is more that of a telefilm than a cinema feature. 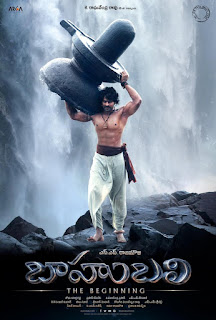 Let's get the praise for Bahubali out of the way first. So far as the fantasy epic genre is concerned, director SS Rajamouli has ripped this country's film world a whole new one. Technically the bar is now so high I pity the next Indian maker that tries something in this genre. In terms of VFX I would place Bahubali somewhere near Peter Jackson's Lord of The Rings series. LoTR admittedly was made more than 10 years ago, but even Bahubali's touted status of the most expensive Indian film (at ~$40 million) would account for a fraction of the former's budget and available resources. Some of my favorite bits in the film come in the early part which feature fabulous mountainous terrain with raging waterfalls. The HERO (a gym-buffed Prabhas) is shown to be an accomplished rock climber in scenes that provide plenty of vertiginous thrill; the visual motif of climbing is even extended to an early romantic dream song sequence making it far more entertaining than these things normally turn out. Don't look for any logic in the terrain - Atop the waterfalls stand snowy mountains complete with avalanches (that can be outrun with improvised toboggan rides), immediately behind which lies a sun-drenched billiard table plateau where men may walk with bared torsos. The art design similarly is a mishmash of Indian, Egyptian and Roman styles. It doesn't matter, because there's no attempt to ground it in any actual history; it's the Manmohan Desai / Babubhai Mistry kind of cinema taken to its technological zenith and done with sufficient verve to make it an enjoyable M-O-V-I-E experience. Apart from the visual wankery on display, the casting is suitably epic (special nods to Southie stalwarts Ramya Krishnan and Sathyaraj, and I am definitely looking forward to what Kicha Sudeep, seen here only in a cameo, will bring to the second part) and Peter Hein's action choreography lives up to the best of his past record. Yep, this is definitely something you don't want to wait for cable television or your local pirated DVD guy to get a hold of.

So what (IMO, I realize many of you will snort at such reservations) holds it back from Popcorn Hall of Fame? One thing that got my goat early was the depiction of the warrior heroine (Tamanna). In immediate contrast to the aforementioned dream song sequence, she is introduced as a trained warrior that can in a brawl hold her own and then some. Considering that Tammy is usually the go-to for simpering bimbo parts, this had me cheering. But almost as soon as her character encounters the HERO, she is instantly relegated to secondary status. He subjects her to a cheery molestation (ripping off her fighting clothes which apparently held a flowing dress inside), which of course means she must fall in LURRRVVV. Her burning desire to carry out a patriotic rescue mission is summarily taken over without so much as a by-your-leave, while she is left to hang about in the sidelines. I don't want to sound pedantic, but if there is anything the classic Hong Kong martial arts movies have shown us, it is that you can have delightful entertaining spectacles where women warriors kick as much or more butt than the blokes. And they don't have to turn butch for it, they're wonderfully feminine and graceful and all the more attractive for their skills. Hopefully the second installment will remedy this, but right now a huge opportunity to have a sexy camaraderie between two warriors has been missed in favor of a stereotype romance. You have fierce Mother archetypes, but apparently having the romantic interest be an equal opportunity partner remains a no-no.

This is a lesser complaint but I am also a little disappointed that after the intriguing beginning the main narrative is set in flat terrain with battle sequences that for all their exciting moments (and there are many) don't feel too different from those seen in Hollywood's fantasy films. The vertical rockscapes promised some unique thrills, and it would have been great to see Rajamouli take a different track than walk in the footsteps of Jackson & co.

Petty whines notwithstanding, Bahubali is still well worth your ticket money (thankfully the makers didn't go for murky 3D conversion, opting instead for a fabulously bright and colorful screen experience). But my argument stands that without any compromise to its entertainment value it could have also advanced the possibilities of the archetype epic in Indian movies.
Posted by Suresh S No comments: