I recently saw Passion of Joan of Arc on the Eureka blu-ray. The last I had seen this film about the trial of Joan of Arc at Beauvais and her subsequent burning at the stake was several years ago on a version that used Richard Einhorn's Voices of Light as the soundtrack. I held back a long time on getting this blu-ray for the reason that this score was a very integral part of the images I was seeing. But anyway, I took the plunge. This time I saw the film in a specially prepared 20 frames per second version (using frame interpolation) with a piano score by Mie Yanashita (I know director Dreyer intended for the film to be seen in complete silence, but I can't imagine doing that, at least for now). It remains a powerful experience. Earlier I used to wonder why large portions of the film do not have inter-titles, but now I realize that the inter-titles only reflect the words actually recorded in the written proceedings of the trial, and the script fills in the gaps with imagination and conjecture and does not give them any written dialog. Maria Falconetti's performance is THE reason to watch this film. Out of context it may just appear like a bunch of sad face expressions, but one can really believe her as a women tormented for her genuine conviction about being given a divine mission to rid France of the English.

Visually, the change in frame rate itself does not make a huge difference for me, but the image quality is a major bump from the standard definition version. Of course it's by no means reference grade material, because even after restoration there are plenty of minor scratches and other slight issues, but the image now has tremendous depth and nice texture especially in the (many) close-ups. The piano score does not have the awe-inspiring feel of the Einhorn score, but it is actually pretty good in holding the mood of the scenes.
The package is one of the most beautiful looking I have scene from Eureka. I have posted a few pics (from a crappy camera) of it here: 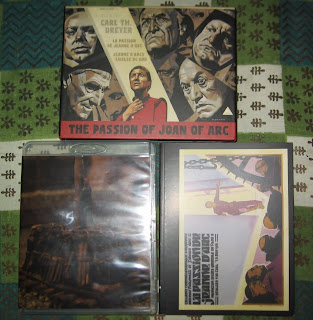 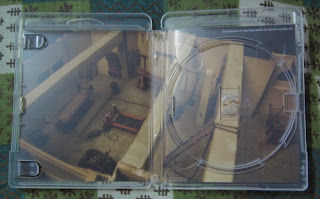 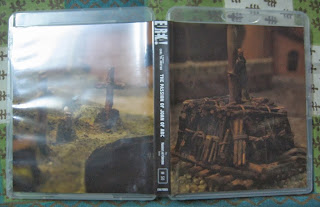 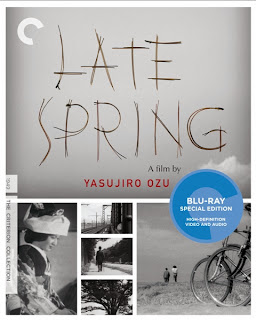 I hadn't seen Late Spring before, but felt relatively safe in buying it because having watched Late Autumn and Early Summer, I felt there was a sufficiently predictable pattern to director Ozu's style for me to take the gamble. Predictable is not a knock here, as Ozu's films are not about the destination but the journey, and Late Spring is another fine film in his repertoire. The plot concerns a elderly gent (Chishu Ryu) worried about marrying off his daughter (Setsuko Hara), but the girl is happy with caring for her father and wants to continue their present life. The plot is simple, the script's beauty is in the delicate portrayal of relationships and the dilemma the characters face between their emotional desires and the role that civilized human society requires them to play. It's sad that most Indian audiences are not interested in foreign cinema that doesn't come from Hollywood. I feel they would find a lot common social / cultural ground with the characters of Ozu films and the moral dilemmas they face - I would say they are very similar to Sooraj Barjatya / Rajshri films, if you put aside the gaudy naach-gaana and chauvinism. It also helps that Ozu has a very unpretentious low-key style. Late Spring, like his other films, has a gentle pace, but cannot be described as slow-moving in the sense that there are no wasted or empty moments. My favorite scene in the film is when the father advises the daughter as to why she should get married and how she should aim for happiness in life. It's beautifully understated both in direction and in the actors' performances, and brings a lump to my throat.

The video quality of the Criterion blu-ray is compromised on account of the source material. While the studio has doubtless done its best, there are many damage marks (most of them slight and non-distracting) and some amount of flickering. The mono sound is clear and solid. I haven't gone through the extras, but Wim Wender's Ozu related documentary - Tokyo-Ga - sounds pretty interesting.
Posted by Suresh S No comments:

City of Age, City of Decay

Footsteps cloaked in musty silence
You inhale the mold of ancient dreams
Dry lips emit no word, no whisper
Though your mind is wracked with screams.

Aging spires loom high in the darkness
At angles too monstrous to comprehend
Rust in the air, rust in your bones
There's no release and you can't pretend.

Sightless in the Alley of Shadow
You perceive by senses beyond the pale
Strung from lamp-less posts, the corpses
That forevermore shall tell no tales.

They have not mouths, nor ears, nor eyes
Not blood nor sex, these withered shells
Drained of conscious thought, you join them
Welcome to your personal hell.
Posted by Suresh S No comments:

In Which We Serve [dirs. Noel Coward & David Lean] 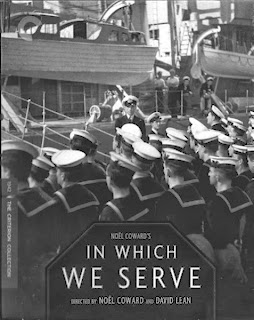 It makes for an interesting comparison, this film and the one I posted about before, The Life & Death of Colonel Blimp. Both are British films concerning the Second World War, and made during that period. In Which We Serve (1942), released a year earlier, was the golden child, showered with a large expense account and all manner of advise and logistical support from the British armed forces. The reason is easy to see, it's plainly a propaganda film, one that exclusively celebrates the chivalry, selflessness and gentlemanly spirit of the British forces fighting the war, and the brave front put up by their loved ones back home. The enemy is always seen from a distance, a nameless warship or attack plane; for all this film cares, they might have been piloted by robots wearing horned Hitler masks. Where Col. Blimp differs is in giving a face to the enemy, suggesting that they too are honorable and courageous soldiers, and in implying that the days of battles being conducted as by-the-rules games of cricket are over. For this, the makers were strongly "advised" by the script-censors not to make the film, and denied all forms of official support. Winston Churchill himself did his damnedest to block its release. It was only several decades later, thanks to the efforts of cinema champions like Martin Scorsese, that the world got to see the intended version of Powell and Pressburger's wartime classic.

Anyway, we're talking here about In Which We Serve. While it is a propaganda film, that doesn't by any means make it a bad one. It was the brain-child of the versatile and immensely successful artist Noel Coward. Coward was a patriot and wanted desperately to do something to aid the British effort in the War. When the producers came to him with the offer of funding any script he had in mind for a movie, the normally film-averse Coward translated into an engaging screenplay the wartime experience of his friend Lord Louis Mountbatten, who captained the destroyer ship HMS Kelly before it was sunk by the Germans. The lead character, played by Coward himself (and rather well, exuding the requisite quiet authority), is based on Mountbatten (and Coward wore Mountbatten's cap for many scenes), although modified to avoid direct comparison on the man's request. Coward's search for someone to "help him with the technical side of things" led to his discovery through a mutual acquaintance of David Lean, then an editor. Lean accepted the job on condition that he share directing credits with Coward.

What is therefore most remarkable about In Which We Serve is that it is the feature film debut of both Coward and Lean. To start your film career on a large budget war epic with massive logistical challenges could not have been easy, but the final product looks remarkably assured. The film starts with the sinking of the destroyer HMS Torrin (a fictional stand-in for the Kelly), helmed by Capt. Kinross (Noel Coward). The surviving crew huddle around an inflatable raft, and as we focus on each of them, we enter a flashback that looks at their life, their relationships with their military colleagues and their family members. It's a somewhat clumsy structure, but allows for a variety of experiences as we get an inside view into a cross-section of characters from the clipped-tongued captain to the East End sailor. Uniformly, they focus on presenting a charming warm-hearted picture of regular patriots, with loving supportive families, so it's not as realistic (or cynical, if you so regard) as the war films of successive decades would be, but it does its job as a rouser of public feeling in a skillful and sincere manner. Especially touching is the depiction of the families. The characterization is simple but there is nuance in the evoking of social strata and in the performances. Easily the best of these is Celia Johnson as Mrs. Kinross, who belies her cinematic debut with a well-anchored performance, exemplified in the lovely single-take scene where she extemporizes on her feelings towards the "rival" of all naval wives, their spouses' ships.

On the technical side, Ronald Neame, a regular DoP on the Coward-Lean partnerships, does a sterling job of capturing the vision of the directors. The lensing is not flashy, but solid and effective, with great contrast. The scenes of on-ship battle look quite convincing in comparison to other films of a similar period. On the whole this is a very well accomplished rah-rah patriotic film that manages to rouse without appearing fake or grating.

Criterion's blu-ray of this film, part of a set of Coward-Lean films, gives an excellent visual presentation, showcasing deep contrast and fine detail. The mono sound is limited by its source, but clear and free of distortions. A fair number of extras, including a Coward biographer talking about the film and a making-of documentary with interviews from several sources, including Ronald Neame.
Posted by Suresh S No comments: