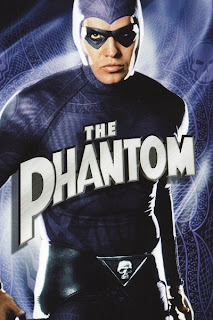 Comic book movies more than any other genre are enjoyable or not predominantly on how much you're attached to the original source. The Phantom movie adaptation is a striking example of this. During my childhood I was a huge fan of the Phantom comics as released on Indrajal, and I still try to get the stories that I consider distinctive enough when I see them, so my opinion of this movie is definitely colored by my enjoyment of its relation to the source comic.

The storyline is quite hokey. In 1938 the 21st Phantom must battle a lawless magnate called Xander Drax who wishes to acquire 3 magical skulls whose combination will release an energy more powerful than anything else and enable him to control the world. Yada.

Quite a few things have been done right here. The production design is very handsome, be it the depiction of the Phantom's jungle realm - the Skull Cave, treasure room, ancestral crypt, the phantom chronicles etc. - or late 1930's art deco New York. The narrative moves at a zippy pace and the writers have rightly analyzed that the Phantom is a macho wise-cracking ass-kicking action hero who doesn't spend time moping over his dead ancestors or over his love Diana. Some of the action set-pieces, like the one where the Phantom and Diana are escaping from the villains in a small plane and do a leap onto the back of the Phantom's horse Hero are terrific. Billy Zane carries the Phantom mantle with charm, effacing to a great extent the essential goofiness of the purple costume. Unlike the alter-ego of many other costumed heroes he's also equally interesting as Kit Walker.

So what are the disappointments?

The plot. The Phantom's world in its limited scope has been distinctive. His villains are pirates, poachers, despotic rulers of tiny neighboring nations. Bringing him to New York just a third into the film and having him combat a generic world domination scheme takes away from the uniqueness of the franchise

One of the quibbles that those wanting the most faithful sort of adaptation of the Phantom franchise will have is that the film does not feature any BLACKS. The tribes surrounding the Phantom seem like they're from Hawaii or south America, as does his retainer Guran (dressed here in a Nehru jacket and turban). 1938 New York too seems totally free of blacks, even as serfs. Probably the makers chickened out from depicting blacks as they were portrayed in the Phantom strips.

The perceived need to have emancipated women also hurts the movie's legend. Sure, Diana has always been a tough cookie but if she can also wipe out guys with single punches, what is special about the Phantom and all his hardcore physical conditioning?

The villain Xander Drax is a huge disappointment. Sure he has a great name but he's played by an actor with a reedy voice who inspires no chill even when he's doing questionable things like having librarians eye-stabbed by spring-loaded knives or lobbing javelins into the backs of disagreeable colleagues.

The film seems to have had a curious budgeting. The sets and props are handsome and some of the action is painstakingly choreographed but the post-production budget seems to have been nothing because all the visual effects have a very low-quality to them, frequently worse than even some of the more recent Indian movies incorporating SFX. The climactic showdown in the lair of the Singh brotherhood also has an underwhelming feel to it. I imagine the original vision was to have a huge pirate warren but the budget constraints reduce the Singh stronghold to little more than a single mid-sized room set and a clash with around a dozen pirates at most.

All this nit-picking may seem that the movie has more bad points than good. But if you keep an open mind and fill in the gaps that the lack of budget creates you have still a fairly enjoyable outing and possibly the best Phantom adaptation given that there is no scope for one in the future.
Posted by Suresh S No comments:

I never expected Go Goa Gone (GGG) to be any match for the Return of The Living Dead's and Zombieland's of this world. But this trailer suggested what could be a passable attempt at an indigenous zombie movie mixed with the trademark humor of the guys that made the smashingly funny 99 and the more ambitious if flawed Shor in The City:


That however turned out to be not the case. If one were to ask, as the movie itself, taking inspiration from a Steve Jobs poster, likes to ask several times over, "What do we know? What have we learned?" these are the points one can put together:

1. Too many borrowed elements - Slackers? Call of Duty references? Foreigners as zombies? Not that many Indian movies in cult genres are known for their originality but the problem is that even the borrowing is done in a very lazy manner, with not a smidgen of freshness or creativity. GGG may be an Indian production with Indian lead actors, but the script and direction is utterly generic with respect to the setting.

2. Not enough local flavor - 99 and Shor... were remarkable for their attention to detail towards local cultural stereotypes, and much of the canny humor was generated therein. GGG has zero local flavor, not even Goan, which makes it numbingly bland for most of its running time.

3. Huge lacuna of decent jokes - Remember the bit about the "dumb charades in the jungle" from the trailer? I was hoping there would be a fair amount of like humor in the film, but it turns out that the trailer has most of the good bits in the film...which is bad considering that the trailer runs less than 3 min and the film stretches to a zombie-fying 110 min. People around me at the cinema seemed to be enjoying themselves a fair bit, but then they were the sort whose funny bone was tickled every time someone cussed. Kunal Khemu has very good comic timing but he can't transcend the absolute lack of even half-decent material to work with. Saif Ali Khan has a small number of one-liners in the film, all of which are equally un-funny.

4. Shallow and Inconsistent - Again not uncommon in movies, but here it's inconsistent without being entertaining. The supposedly expert video-gamers and cable TV nerds have trouble recalling what zombies are, really now. The scene from the trailer where Saif's character Boris reveals his Delhi origins comes very early on in the film, but then he reverts back to his faux Russian accent for the most of the remaining time - some more Punjabi humor would have been a shot in the arm for the proceedings. The paper thin characters have you not giving a fuck as to what happens to them. The zombie shots are very disjointed and almost never raise any tension. Most of the gore elements come from digital blood splatters, and some of them appear to have been cleaned up from what was shown in the trailer. While this appears a childish thing to complain about given the lack of personality in the main characters, even the zombies are totally non-descript and devoid of any memorable moments.

So if your horror-n00b aunts and uncles come talking about how they too have dipped their beaks into the zombie genre with GGG, just remember to aim for their heads.
Posted by Suresh S No comments: 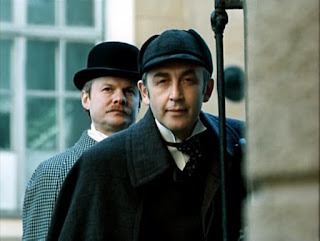 Ah yes, that's Russian for Adventures of Sherlock Holmes and Doctor Watson, the early to mid-80's Russian tele-film series that was apparently one of the cornerstones of entertainment in erstwhile Mother Russia. I had heard of this series some time ago, especially the high praise given to Vasily Livanov's portrayal of Holmes and the faithfulness to the original stories. In Moscow they have a statue of Holmes and Watson (Vitaly Solomin) cast in the likeness of the actors from this series, and Vasily was given an honorary OBE.
At long last I have an opportunity to actually try this out. I just saw the first episode (An Acquaintance), which takes the meeting of Holmes and Watson from A Study in Scarlet, then nicely segues into the plot of The Speckled Band. I can understand the logic behind that since the plot of A Study... is too lengthy to be respectably contained in an hour-long episode, and this provides a nice complete-in-itself introduction to our Baker Street companions. If the quality of the first episode is any indication, the production values are quite nice with a modest but pleasing representation of Victorian London (actually shot in Russia). 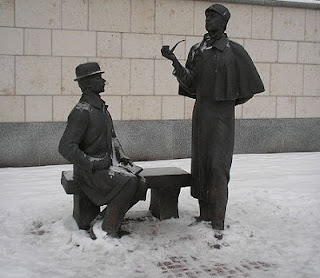 Of course, what would interest many of you is the portrayal of the lead characters. Sherlock Holmes fans have read the original stories several times over and each has a crystallized image of the gaunt detective and his loyal "friend and colleague". Many actors have portrayed Holmes in various adaptations, and Vasily Livanov's name can stand proud with them. Unlike most actors in the pre-Jeremy Brett era, including the respected Basil Rathbone and Peter Cushing, who portrayed Holmes as a brisk rather chummy avuncular chap, Vasily brings languor, moodiness and a hint of arrogance to his performance. It's not the full-blown baroque theatrics with which Jeremy Brett would astound and endear himself to Sherlock Holmes fans and redefine their image of the character, but it is interesting. Dr. Watson is also in good form at least in this first episode. His initial reaction to Holmes is one of suspicion and antipathy, and at one point, don't ask me how, they have an indoor boxing bout. While they get around rather soon after that, I am hoping this is an indication the Watson of this series will not be a mute spectator or a bumbling clown. I will get back when I have sampled more of the series but this is an auspicious beginning.
Posted by Suresh S No comments: