Like the slushy, grainy mess
At the bottom of a coffee press
This Browny Monday.
Posted by Suresh S No comments:

Don't let the dual director credits fool you, the 'real' direction for this film comes from producer Val Lewton, who made a remarkable series of low-budget high-concept psychological terror films for RKO studios from 1942-46. The first in that parade was Cat People, and 2 years later came this sequel. A sequel it is in name only, forced by RKO's demand with, like for most of Lewton's films, a title imposed by them, leaving the producer to work out the “little” details of plot and execution. Apart from Bedlam and The Ghost Ship, I thought all of them were immensely rewarding.

Curse... is in actuality a sensitive exploration of the dark side of childhood imagination. Apparently based on Lewton's own experiences and having at least a casual similarity to that achingly tragic tale Silent Snow, Secret Snow by Conrad Aiken, our center of attention is little Amy (Ann Carter), an unusual child that compensates with her imagination for the lack of friendship in her real world. Amy is a character that some of us, myself very much included, would identify with to a greater or lesser degree. With a mind that travels on a different track than the vulgarity we define as “norm”, Amy is unsurprisingly shunned by her peers who have not learned to accept her individuality.

And not just the children, this lack of comprehension also applies to her parents, especially her father who feels that he must pressure Amy to conform to his expectations of a normal child. This is an unthinking pressure that with its resultant guilt-complex only further destabilizes Amy's thoughts, making the fantasy-world an ever more desirable place to disappear into. Other characters she encounters, like the very Miss Havisham-like Julian Farren (Julia Dean) who denounces her own daughter as an impostor and insists on treating Amy to a telling of The Legend of Sleepy Hollow, batter upon the fragile windows of her sanity.

Most of Lewton's terror films teased the audience with “Is this real or imagined?” dilemma where they had to judge for themselves if there was any actual supernatural element or merely reflective of the paranoid/fantastic imagination of the film's characters. Curse... also entwines the same philosophy into its narrative. The trademark play of light and shadows and sound is here more reflective of Amy's response to her surroundings: The dimming of the lamps as Mrs. Farren plunges deeper into her tale of horror, the magical glow of the garden when Amy's “friend” appears, the apparent clatter of hooves as a terrified Amy dreads the coming of the Headless Horseman. We are one with Amy's perspective as she repeatedly fails to find her footing in a world ever more unaccommodating to her beliefs.

Curse of The Cat People is no uninspired attempt to make a profitable franchise, it's a gripping original work that deserves to be seen on its own merits.
Posted by Suresh S No comments: 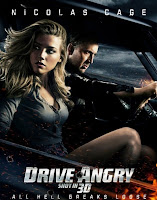 The 3D on the theatrical run of Drive Angry must have been really something for my friends to like it, because in plain ol' 2D it majorly sucks. Apart from an amusing-cool turn by William Fichtner as the supernatural Accountant, this Terminator-meets-Cobra-with-lashings-of-Shoot 'Em Up vehicle has scarcely any of the charm or wit of its inspirations. The colors look washed out, Nicholas Cage is in trademark "I shouldn't have gotten out of bed this morning" mode, and apart from VERY brief bits where the goofiness of the proceedings elicits a smile, the bulk of this shitty drive is a waiting game for the end-credits.
Posted by Suresh S No comments: 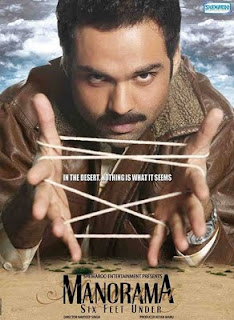 One of the pitfalls of working primarily as entertainment to either the great unwashed masses or the cud-chewing family archetype is that Indian cinema has either completely omitted or produced extremely crude and elementary examples of films in off-kilter genres like horror and noir.

The detective noir in particular has been rarely seen in home-grown film efforts. One suspects that the basic tenets of this type of film run in direct contrast to the basic tenets of mainstream 'masala' movie-dom. In noir, the central protagonist (hero, if he may be called that) is almost typically a deadbeat; a loser who nurses a dream of making it good in life and has compromised himself (or herself but let me concentrate on one gender for convenience sake) in some ways to get along with the world, but still lives on the fringes, by compulsion more than choice. Against this background he finds himself getting rapidly embroiled in an unfolding roller-coaster of characters and circumstances that often turn out to be other than what they initially appear. He finds himself in situations where his internal code of conduct - what may be his sleeping but not quite dead conscience - is called in to make the decisions...and the results are never entirely happy.

One of the previous efforts in Hindi films that could be said to have a brush with the noir genre is Ketan Mehta's 1997 outing Aar Ya Paar. That one suffered from two fatal flaws – incredibly bad casting and most abysmal direction. Thankfully, Navdeep Singh's debut feature crosses those hurdles with a nimble grace and has enough points of interest to merit viewing.

The protagonist Satyaveer aka SV (Abhay Deol) is archetype noir, right down to the irony of his name. He is the failed author of a detective novel Manorama, which according to his words was the “magnum opus that sold less than 200 copies”. Running his domestic affairs - which include affectionate, if not always sweet-tongued wife Nimmi (Gul Panag) and son - with a government job, SV bungles even this and at the start of the narrative, has received a suspension order for taking bribes. In the midst of this mundane not-quite-happy situation SV receives a visit from a strange woman (Sarika), supposedly the wife of a local MLA, who wants him to play private eye and investigate her husband for extra-marital shenanigans. SV is game for what seems a well-paying errand and comes up with some material...only to find that his client was not the MLA's wife, but a woman called Manorama and worse...this Manorama turns up dead in what is claimed to be an accident. A dazed SV starts to poke about the mystery and finds himself coming across a motley of characters, who...let it suffice to say initial impressions are not always the correct ones. Whether SV manages to reach the truth of the mysterious threads enmeshing him and whether he is able to come through his experience unscathed is what forms the rest of the narrative.

The thing that immediately strikes one about MSFU is that it is a seriously intended noir, and not a routine film with a few cute genre references (although it does refer to Roman Polanksi's Chinatown from which it liberally borrows plot elements). Audiences that are used to films bulldozing their plot points to get through to the feeblest of intellects be warned: MSFU does away with the hand-holding in favor of a brisk and packed narrative – for instance, the protagonist's entire background is revealed in two sentences of dialog near the film's beginning, and several other critical clues are flashed in a blink and miss manner rather than highlighted with a figurative big red arrow; the less alert may be stranded in the flow of events. The script sets up the noir archetypes in a credible manner for most part, and does a splendid job of transplanting them to the small-town Indian milieu. Furthermore, as a rarity in Indian movies not of the orthodox art-house canon, every aspect of the production is geared to serving the story, never for flashy irrelevant flourish. I believe that the way this film has been presented is an obvious indication of the sincerity of its makers and their respect towards the genre they are attempting.

The best part of the film is the casting. Character-play is paramount in noir and MSFU achieves that handsomely with its careful selection of players. Abhay Deol, the off-kilter sheep of the Deol family, gives a singularly apt performance as Satyaveer, easily conveying the failings and virtues of his character. Gul Panag makes the most of what could have been a very thankless role and gives presence to Nimmi. The other actors, including Raima Sen, Kulbhushan Kharbanda and Vinay Pathak are also in fine form, playing archetype but with sufficient restraint to not come across as caricature. The film has excellent technical values: The sets and Rajasthan locations accurately portray the gritty situations of the narrative. Camerawork is also brilliant and makes wonderful use of the widescreen scope, events and motifs occurring all across the screen.

So is MSFU quite ready to place alongside the likes of LA Confidential? No, not by a few rungs. Without doling out spoilers, the main problem is that in its latter parts the writing gets a little too caught up with cramming in as many connections to make the spider-web narrative, which leads to some degree of messy contrivance without adding any emotional resonance. Manorama, who is by rights the central pivot of the film becomes almost an occasional reference in the latter part and her tie-in to the other narrative elements is tenuous. The circumstances under which the protagonist finds the damning proof to nail his adversary is also too convenient.

But despite its shortcomings and areas of muddiness, MSFU is interesting in itself and worth appreciating as a sincere experiment to bring a hitherto barely explored narrative style in Hindi movies. I hope we get more of such intelligent movie-making from Navdeep Singh in the future.
Posted by Suresh S No comments: