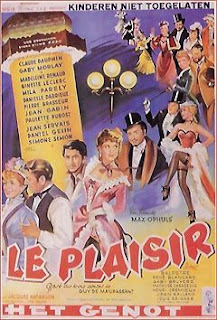 The screenplay for Le Plaisir is sourced from 3 short stories by the celebrated author Guy De Maupassant - The Mask, The House of Mme Tellier and The Model.
The Mask opens with a ballroom dance entertainment to which all of gay society seems attracted. A man wearing the mask of a bohemian toff rushes in and sways wild on the dance floor till he suddenly drops. A doctor takes off the mask to find an old man beneath, and after first aid, undertakes to escort him home. It turns out the old man was a dandy in his youth, much sought after by the womenfolk. He wears the mask to barge into dance-halls to relive his naughty youth. Ophuls tells the story with the pithiness it requires for impact, and the vigorous camerawork in the dance-hall sequences is a delight.
The House of Mme Tellier aka Le Maison Tellier, the longest running episode in this triptych, is an amusing social comedy of what happens when the ladies of a respected brothel go on a suddenly announced holiday to the countryside. There is an uproar amongst the townsmen with their weekend boredom and frustration leading to quarrels ("This is how wars start", one character notes). On the other hand, the ladies, who are attending the communion of Mme Tellier's niece, have an emotional quasi-religious experience in the village church during the ceremony. There is also the sub-plot of Mme Tellier's brother Joseph (Jean Gabin) having less than honorable intentions towards one of her ladies, culminating in a drunken episode. There is observation of social mores, the endearingly friendly relationship between the ladies and their clients (was this true of the time? who knows?), the amusement from contrasts of the characters. When Joseph's playful flirtations cross the line into sexual transgression, he is immediately contrite and apologizes to the women, recognizing their dignity. This was my favorite episode, wonderfully acted and directed with subtlety and a delightful lightness of touch. There are some fantastic pans and tracking shots, like towards the beginning of the film where Ophuls explores Mme Tellier's House through its various doors and windows. I do wish he could have shot this episode in color. The visuals of the countryside were crying out for some technicolor goodness and the scene in the train where the ladies are being seduced by a salesman of colorful garters has less impact in grayscale, IMO.
The Model is to my mind a lesser story and thankfully relegated to a short quarter of the film. An artist falls in intense love with a model and they stay together, only to find differences of temperament that lead to quarrels. He moves out, no longer interested in the relationship. When she threatens to commit suicide by jumping off a building, he dares her, only to find that she is actually capable of the deed. The fall leaves her legs permanently damaged, and either in recognition of her act of adoration or the guilt of being responsible for her condition, he marries the crippled woman and devotes his life to her care. Even with the brevity with which it is shot, there is an element of shrill melodrama that's less interesting than the clever and observant episodes that came before. 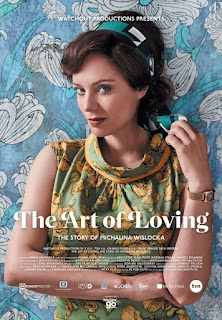 Michalina Wislocka (Magdalena Boczarska) was a Polish Gynecologist / Sexologist who in the 70's put out a taboo-breaking book of sexual advice called The Art of Loving (known in its English edition as A Practical Guide to Marital Bliss). She wrote it out of frustration of having to deal with a huge number of unwanted teenage pregnancies and botched abortions, and battled a double-whammy of culturally (and sexually) repressive socialist regime and orthodox church to get it published. Wislocka herself had an off-the-beaten-track personal life, coexisting in a threesome with husband Stach (Piotr Adamczyk) and best friend Wanda (Justyna Wasilewska), which eventually led to domestic conflagrations and the severing of ties.
Art of Loving moves back and forth between three major time-lines: the 40's, when she was in her unusual marital arrangement with Stach and Wanda, the 60's where in the course of providing her services across the country she meets and has a passionate affair with the sexually liberated but caring family man Jurek (Eryk Lubos), and the 70's where as a middle-aged rebel she pushes hard against an obdurate openly hostile bureaucracy to publish the book that would eventually go on to sell 7 million copies and revolutionize the intimate lives of the common Polish people.
The film is written to be a crowd-pleaser, with Wislocka presented almost as a haloed saint of sexual liberation. While her personal issues (especially with bringing up the children she and Wanda bore with Stach) are touched upon, they are forgotten after a point to focus on portraying her as a champion of secular love. The sex scenes in the film are portrayed with glamorous angles and soft focus, and all the naked flesh (female and male) seems to have been vetted for its photogenic quality. The back-and-forth between time-lines gets tiring after a while and one feels that at least one of the periods should have been shortened and referred to in hearsay rather than actual time-jumps. The Art of Loving is beautifully shot with pretty color schemes, and manages to be an inoffensive though not very emotionally engaging entertainer.
Posted by Suresh S No comments: