The Whip and The Body [dir. Mario Bava] 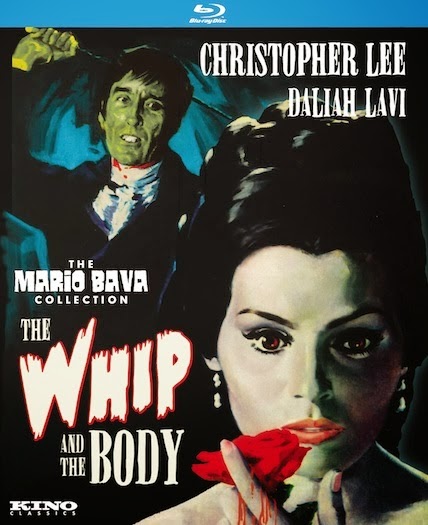 Mario Bava was a master of the Gothic horror and The Whip and The Body is another fine entry in that line along with Black Sunday, Kill Baby Kill and Lisa & The Devil.

At Castle Menliff, an aging count lives with his son Christian and daughter-in-law Nevenka, and household servants, old maid Giorgia and her daughter Tania. Into this calm if sombre household bursts in the count's immoral and sadistic elder son Kurt (Christopher Lee), who had walked out of the house some while ago after having seduced and abandoned Giorgia's other daughter, who eventually committed suicide with a dagger that Giorgia keeps as a souvenir of Kurt's cruelty.

The count reluctantly allows Kurt back into the house, a move that stirs up a hornets' nest of emotion, including Nevenka who seems to have had a torrid masochistic affair with Kurt and married his brother as a compromise after Kurt deserted the family. Christian resents his brother's presence (as well as his claim on the inheritance), Tania has a soft corner for Christian and Giorgia hates Kurt for what he did to her daughter. This is a tightly-wound whirlwind of tension and melodrama that eventually leads to a murder...then another...and another.

The mystery as such is predictable, but the film has amazing atmosphere, and Dahlia Lavi's performance as the violence-aroused Nevenka is a strong one. Bava, with talented cameraman Ubaldo Terzano, paints a rich and beautiful canvas with hues that have to be seen to be appreciated. The film gives off the strong impression of walking in a dream, with its lush otherworldly colors, crushing deep shadows and intensely romantic score (Carlo Rustichelli). Some scenes bring to mind the moody beauty of Edward Steichen's Pond-Moonlight. If you have seen and liked any of the Bava films I mentioned earlier, you need to see this one too.

Kino's blu-ray gives a fine presentation of the film. The print is not restored to the extent Arrow or Criterion would have tried for, but on the other hand, it is not improperly manipulated, looking richly filmic. Like many Italian productions intended for international distribution, all the dialog and sound effects have been added in post-production. The actors mouth their lines in English, but Christopher Lee's voice was not used even in that version, which is disappointing (although to be fair, his English voice artist does a decent job). Kino provides 3 lossless mono (2.0) tracks for the various dubs - Italian, English and French (and English subtitles). The main extra is an interesting commentary track by Bava biographer Tim Lucas.
Posted by Suresh S No comments: