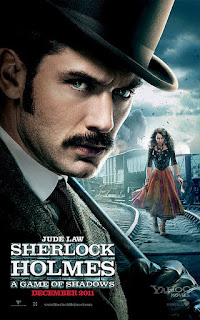 The 2009 movie of Sherlock Holmes was a guilty pleasure. It had very little to do with the creations of Arthur Conan Doyle, but it was a fun romp in its own way, a buddy action movie that just happened to be set in the late 19th century and placed its protagonists in 221B Baker Street (for little time anyway, considering all the running about they did). Robert Downey's Holmes was more Robert Downey than anything else, but Jude Law gave a sassy entertaining spin to Watson, bringing that all-too-easily dismissed character to the fore. Yes, the plot was foolish and our sleuth showed more brawling skills than detective work, but the film wasn't to mine eyes any more offensive than the countless goofy plots thought up for the Sherlock Holmes radio programs and films with Basil Rathbone and Nigel Bruce.

The sequel, sub-titled A Game of Shadows, attempts to give us more of the same - more over the top action, more hoofing it across landscapes (country-hopping now), more of characters from the book being untrue to their source material. If you're one to complain how this franchise is not faithful to the Sherlock Holmes “canon” you had best stay away from this. They don't even have the decency to allow for a bit of time to pass before rushing in to tell you that Holmes survived his encounter with Moriarty at the Reichenbach falls.

Oh yes, in the second film itself Holmes has squared off against his arch-nemesis. Jared Harris does a good job of Moriarty as an evil mastermind, reminiscent of the Bond villains. In most scenes, he comes across as Holmes' superior, and even his tone of addressing the detective is one of condescension rather than the respect to which he alludes. Unfortunately, Moriarty's methods to eliminate Holmes and Watson are also reminiscent of Bond villains - Filling up an entire train with enough weaponry to take down a battalion for the sole purpose of snuffing out the good doctor and his wife? Seems rather wasteful, Professor. In fact, the usage of guns increases exponentially as the film progresses; towards the end our two heroes (and a band of ragtag companions) are dodging mortar shells and steam-era ballistic missiles.

So yes, this certainly ain't your daddy's Sherlock Holmes and it's patently absurd every which way you look at it, but is it fun? I liked the first movie a good deal, this one less so. Although Game of Shadows has the same running length as the 2009 film (which at 2 hours plus is a half hour more than what it should be), it feels more bloated, and runs even further if possible into the realms of the generic - there's a scene midway with Holmes and Watson as part of a horse-mounted posse, and it feels like you've landed in one of those Spaghetti western spoofs, Sherlock's disguise skills now extend to custom-designed leotards that allow him to blend in with the furniture, and Stephen Fry as Mycroft has a scene where he shows more naked Stephen Fry flesh than you'd ever want to see, a scene that has no reason to exist other than perhaps Stephen Fry mistakenly thinking it a good prank. But the film is not devoid of its charms: in its best parts it plays like a hilarious spoof on the original characters (Mycroft: “...a matter involving two countries that shall not be named, except that they speak French and German”). Jude Law's Watson remains endearing (Holmes in contrast is even less interesting), and several action scenes carry a good deal of energy. I also love Philippe Rousselot's classy photography that eschews the hyper-contrasted digital look favored by many of today's blockbusters for a more painterly palette.

So on the whole I thought it was quite alright as disposable entertainment. If you didn't like its predecessor, you're certainly not going to care for this.
Posted by Suresh S No comments:

Drowning in movies...and I love it!

Click on the pics to enlarge to full size: