Visual genius Saul Bass' sole directorial feature film Phase IV (1974) is an interesting low-key science-fiction venture about how after an anomalous event in space, the ants of the world get together and decide to take over. In some ways, it is reminiscent of that amazing HG Wells story 'Empire of the Ants'. 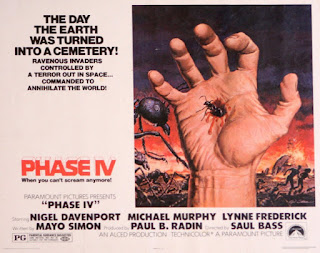 The main action is focused on a small research station where 2 researchers (including Nigel Davenport as a lower-rent James Mason style cold bastard and Michael Murphy as his more human colleague) study some intimidating ant towers: With the help of some cutting edge 70's tracking equipment and mathematical predictions they try to figure out what's on the collective mind of their invertebrate adversaries. Soon they are joined by a young girl barely escaping death by ants (Lynne Fredrick, who apparently was forced into a painful corset and a strict diet to appear underage). While fending off attacks on their station (the critters take out their generator and their air-conditioning) Murphy is trying to send a message out to the ants to convince them that humans are an intelligent life form to co-exist with, while Davenport has a bee in his bonnet about taking out the all-important Queen. 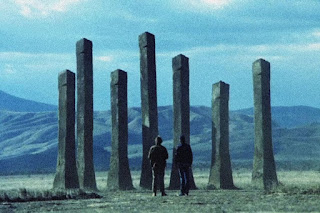 Most of Phase IV is a chamber piece with 3 humans, but it's mixed up with some incredible insect footage. Heck, it's nearly 10 min into the movie before the first human characters appear on screen, and it's a testament to Bass' visual acuity that an engaging narrative emerges with Brian Gascoigne's moody electronic score accompanying shots of ants moving through sinister mud corridors and appearing to be in group conversations about taking over the world. Given that insects cannot directly be trained to follow instructions, they must have employed some ingenious techniques to get them to do stuff that blends with the on-screen narrative. The film ends on the kind of ambitious, ambiguous note 70's Hollywood SF movies specialized in before Star Wars came and fucked everything up.
I recall first watching Phase IV on a ratty looking rip decades ago. Compared to that the blu-ray from 101 films (based on a restoration by the Academy Film Archive) is a revelation. Mind, this is still a low-budget film and a lot of the insect footage shot in dim lighting, but it now has a palpable quality like those vintage BBC documentaries. Looking forward to visiting the Saul Bass short films included on the second disc.
Posted by Suresh S No comments: 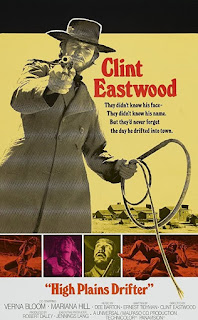 High Plains Drifter, Clint Eastwood's second feature as a director, is a Gothic revenge drama in the garb of a Western. Seeming to materialize out of the heat haze (marvelously captured by Bruce Surtees' cinematography), a lone stranger (Eastwood) rides into town, and almost immediately, he guns down 3 local toughs and rapes a woman (Marianne Hill) that was trying to play a seduction game. The cowardly townsfolk, including its sheriff and mayor, curry favor with the stranger, looking to him as a savior against the threat of some other toughs that had promised to raze the place in return for their prison sentence. But he has other ideas, and they find that they may have struck a bargain too dear, as he makes use of the town's resources (and that includes its people) as he pleases.

Then there are those dreams or flashbacks the stranger has, where someone at least closely resembling him is being whipped mercilessly to his death while the townsfolk hide behind their doors. Who is this man and who is the stranger? Is it mere coincidence that he happened to ride in or does he have a deeper agenda? The film hints at a possible supernatural tint, but doesn't tip its hand either way.

High Plains Drifter pays homage to Eastwood's work in Sergio Leone westerns, but forges its own path. The movie is especially interesting compared to Eastwood's previous westerns in that here he is not even a man that nurses a decent heart inside a tough exterior. His character's sole motive appears to be wreaking bloody vengeance on the townsfolk, and he has no moral compunctions about how he achieves it. The creepy music (Dee Barton) that greets his arrival at the beginning of the film is indicative of this difference in approach, and later there's a brilliant use of a red motif to depict the town's descent into damnation. Seen in this context, the rape scenes are not exploitative, but make sense as the act of a man who lives in a negative space and refutes any attributes of heroism (unlike James Bond forcing himself on Pussy Galore in Goldfinger).
Posted by Suresh S No comments: