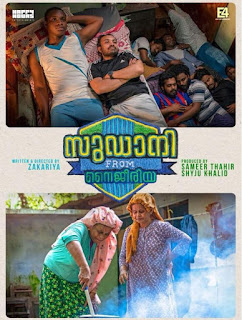 Last night on Netflix, me and mum watched the feel-good Malayalam movie Sudani from Nigeria (SfN). The titular "Sudani" is Samuel (Samuel Abiola Robinson), a Nigerian imported to play for the Mallapuram local football club managed by Majid (Shoubin Shahir, an actor with fine feelers for comedy and drama). Samuel is the growing star of the team which earns from games with rival clubs. The going seems good until one day he gets an ankle fracture and needs lengthy recuperation. Suddenly, Samuel is a liability for Majid, who as sponsor must arrange for the treatment and recovery, as well as deal with the legal issues pertaining to his foreign national ward. The film also touches on Majid's personal issues, including his estrangement from his step-father and search for a marital match.

If SfN is decided on one thing it is to be a intimate-scale warm-hearted family film. The script raises no issues of race or ethnicity. India is known for its specific prejudices about black Africans, but the locals in SfN interact in as friendly and hospitable a manner with Samuel as they would with any newcomer to the state. The differences in language and culture are played purely for innocent laughs. When Samuel meets his misfortune almost everyone is immediately sympathetic, including Majid's mother (Savitri Sreedharan) and her neighbors who, won over by his cherubic smile, shower the youth with maternal favor. While Majid is hassled by the "breakdown" of his team's asset he is, touch of self-centeredness notwithstanding, a decent man.

SfN begins as a football-themed movie, but it's not about the sport per se, and the climax is not about scoring goals (literally or figuratively). It manages the rare quality of being emotional but not cloying. There is a message about being a decent human being but it's not pounded through your head. The actors feel right in their roles, and the direction maintains a light touch. While not a masterpiece of humanist cinema, it is an accessible mainstream movie which succeeds at getting the audience to like its characters and convey a feel-good spirit. And that is in good measure, a win.
Posted by Suresh S No comments: 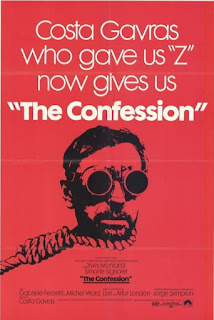 From the director of the political thriller Z (which was also adapted in 2012 by Indian film-maker Dibakar Banerjee as Shanghai), The Confession is another film which looks at corruption endemic to power. It is based on the book written by Czech communist politician Arthur London. Played by French movie star Yves Montand, the film looks at how London, appointed as a deputy minister of foreign affairs just 2 years prior, is suddenly brought in for questioning about his past dealings and accused of being a traitor to the ideals of the ruling communist party. The interrogation, dealt with in great detail, is really more a process of extended torture. Made to keep walking inside his cell, barely allowed to sleep or eat, an increasingly disoriented London is alternately yelled at or coaxed by his tormentors to confess to deliberate treason against the state. Initially London denies the charges vehemently, confident that his basic innocence and his political connections will soon lead to his release. But they are relentless, breaking down his emotional defences, chopping up his testimony to individual sentences and then rearranging them to suit their purposes. London and several of his colleagues are put up for what is called a show trial, one where the guilt of the accused has already been decided and the court proceedings are merely to make a strong example of them. As part of the notorious Stalinist purges, of the 14 people accused at this trial, 11 were executed and 3 - including London - sentenced for life. He was released 2 years after Stalin's demise.

Inherent to the nature of the film, there is a lot of repetition: we see day after day London undergoes repeated cycles of torture. He is held for months without official charges under emergency law where his persecutors have extraordinary powers. When London's wife (Simone Signoret) protests about her husband's abduction in the ministry, their house is seized and she has to take employment in a factory. By the time they have compelled him to sign on practically fabricated confession he has been reduced to a pale thin shadow of his former self (Montand lost 23 pounds over the course of shooting). Then in the period towards the trial they reverse the process, feeding and medically administering to him ("preparing the goose" London remarks), even using a lamp to give him an artificial tan, masking his continuous isolation. The film is powered by Montand's performance, but it's a performance wholly in service to the strong statement the director wants to make.

Gavras sometimes uses a non-linear style going back and forth in London's life. It is suggested that some of the trials he presided over may have obtained confessions of guilt using the same methods he is now subject to. Regardless of ideology, the people in power are invariably corrupt and hostile paranoia increases the more one climbs the ladder of political rule.
Posted by Suresh S No comments: