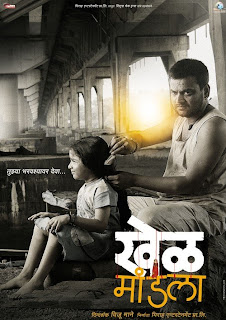 Over the recent years, Marathi cinema, has put up some interesting examples of middle of the road sensible cinema, like Gabhricha Paus, Jogwaa, Valu, Harishchandrachi Factory, Deool etc. Khel Mandala [Viju Mane]...is not one of them. The plot has Dasu, a hereditary puppeteer trying to make a living in big bad Mumbai, finding an abandoned child that is blind and deaf/mute. He raises her in expected Samaritan fashion, and uses her as part of his act, controlling her moments by strings like a puppet. You would imagine that a story like this would involve some melodrama and tear-jerking and it wasn't that I walked into it blind-folded, but the film, at least whatever I saw of it, has little other than cliché and crudely wrought sentiment. Oh yes, I walked out of it halfway. I didn't expect to, I even spent an ill-advised hundred bucks on samosas and coffee at the interval mark, but when early on in the second half Dasu starts having romance song fantasies about the journalist girl who appears sympathetic to his cause, I had an undeniable feeling of having better things to do with my time than sit through this claptrap. Till that point the film was like Mehmood's Kunwara Baap, without the bizarreness that gave its predecessor a morbid curiosity value. I predict the following things to happen later in the film:
In case any of you see it in full, let me know by how much I miss the mark. 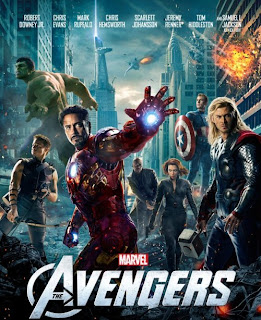 The Avengers [Joss Whedon] last night was pretty much what I expected it to be, a watchable disposable popcorn film (though I didn't have any popcorn). The story is ass, and you have to “marvel” at the need to go through three origin films to culminate in something that essentially comes from a randomized plot generator machine. What mainly works in the film's favor is Joss Whedon's penchant for witty dialog and character interplay – this ain't quite Firefly but it's a decent diversion. The most pleasant surprise comes from Mark Ruffalo as Bruce Banner / The Hulk. What Ruffalo / Whedon achieve here is make Banner interesting enough that you're not just waiting for him to go big and green. I didn't care for Tom Hiddleston's Loki in the Thor film and I don't particularly care for him as the main adversary here – he has too much of a mousy clerk air to really fill the boots of a mischievous God. After a shaky and schizophrenic first third, the dialog and action pick up sufficiently for the film to serve its purpose. The climax is a lot of computer generated imagery and stuntwork put together. I'm sure a lot of skill and hard work went into it but I'm not blown away mainly because the film rarely gives a sense of its lead characters being in any real danger. A classic adventure film, predictability notwithstanding, will attempt to give you some *gulp* moments in its good v/s evil battles. Here, no one seems to be breaking much of a sweat, they're so busy being cool. Anyway, if you like action-oriented comic book movies, you'll definitely find something to like here, just don't expect to find the Holy Grail. 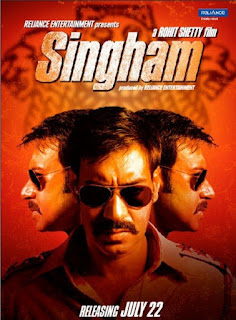 Saw Singham [Rohit Shetty] today with my mum. Having heard so much about the visual quality of the blu-ray I really, really wanted to like this film – if it had been anywhere as entertaining like Dabangg was, I would have definitely bought the BD. But that was not the case. While both these films fit squarely in the masala movie bracket, the difference is that Dabangg took care to see that the script was tight and constantly entertaining – the quirky father-son / brother relation, the attitude of the lead characters, punchy dialog, good pace and humor etc. In Singham everything between the fight scenes drags tremendously. Ajay Devgan (or Devgn or whatever the hell he wants to call himself) has a chiseled physique and he may be better at action but his persona is so dour I don't feel any liking for his character, and in a film like this that's a fatal flaw. Prakash Raj does his usual campy act and he's good but this same role was done with more humor and chutzpah in Bbuddah Hoga Tera Baap. Looks like I won't be buying the BD because I can't imagine wanting to see this film ever again.
Posted by Suresh S No comments: 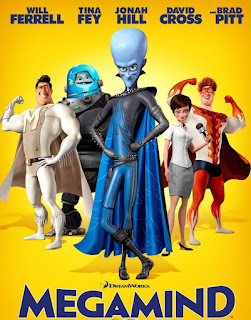 One of the problems I have with many of the live-action superhero movies of the past decade or so is how they've gone emo-core or gritty (or both). Tim Burton's Batman movies kicked off the trend of the sombre comic book hero movie, but at least Batman was a more natural fit for that style. Since then, that route has been mostly a case of diminishing returns, and it's mainly the animated films that have given me my classic comic book movie fix. The DC animated features were in “serious” mode, but packed in sufficient thrills and superhero moments in their crisp running times to be worth the while. The Incredibles from Pixar remains the benchmark for the most fun superhero movie I have seen in more than a decade. Megamind is not up to that level but it comes a close second.
Short of getting an official license, Megamind is the closest is gets to telling a Superman - Lex Luthor story (close enough that I'm sure DC's lawyers must have at least vaguely considered some kind of legal action). The main new trick here is that we see things from the supervillain's point of view. Blasted off from his doomed planet by his parents in a spaceship (sound familiar?) Megamind as a baby crash-lands in a prison, where he learns his rights and wrongs (mostly wrongs). He also finds the world unfriendly to his more obviously alien appearance and nerdy personality (as opposed to his rival Super...Metro Man's hearty All-American Hero avatar). The rejection causes him to discard all attempts to befriend it, paving his way to becoming Metro Man's arch-nemesis. Sure, the plot is borrowed but kudos to Dreamworks for having an actually lucid script that's not just a collection of gags and references. Oh but all of this build-up is just the start of the film, and pretty early on Megamind, much to Metro City's, and particularly, Lois Lane clone Roxanne Ritchie's dismay manages to get rid of the hero.
What's a supervillain to do now that he has destroyed his only match forms the interesting and often endearing remainder of the film. The film throws up some lovely possibilities when juxtaposed against the Superman canon – Luthor building another superhero to battle with...and falling in love with Lois, even adopting an alter ego to court her? Hah, interested, aren't you? I won't spoil any more then. In any case, unpredictability is not the strong suit of the movie; it's charm, smile-inducing giddy boyish charm. The voice actors are a big part of the charm – Will Ferrell and Tina Fey totally nail it as the unlikely pair, Jonah Hill as Megamind-generated hero(?) Titan handsomely delivers, and Brad Pitt offers strong support as Metro Man. The setting and style is akin to The Incredibles' brightly colored retro-chic. It works equally well for this film, and the costuming is absolutely gorgeous. And then of course the thrills. The action sequences in the film, in particular the airborne ones, are as good as I have seen in any superhero film. All through I was thinking, THIS is how they should be doing a Superman film, not some dull gritty reboot.
Where Megamind falters is in its anxiety to cover all bases. The character of Megamind's minion (called...Minion) is half-hearted in construction and adds a noticeably more child-oriented element to the story. There are also instances where the ambitions of a scene are undercut by the need to place in a recognizable “Hey, it's that one!” soundtrack reference; Ozzy's Crazy Train was a fun addition and Michael Jackson's Bad is justified, but Welcome to The Jungle seemed to have been included only with the idea of passing on cocaine money to Axl Rose.
But these are petty niggles. Megamind is a fun and lively superhero movie, and very likely to appeal to pre-Frank Miller era comic book fans. In other words, there's no school like old-school.
Posted by Suresh S No comments: 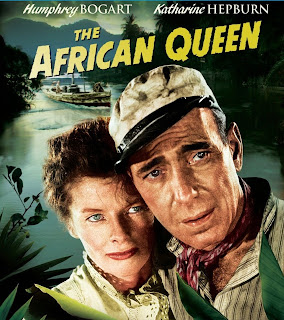 If The African Queen were to be made today, it would probably have more youthful stars (unless they went in for that old standby Harrison Ford, in which case it'd be called Indiana Jones and The Naval Juggernaut), a more convoluted and breathless screenplay, and far more elaborate stunts and explosions to qualify as an “adventure” film. But this was in 1951, when you could still have an old-fashioned romance with mature actors skilfully folded in with a rousing Boy Scout story about two people in Africa on a dinky little riverboat laden with explosives going on a mission to sink a German gunboat.

Humphrey Bogart and Katharine Hepburn, as a boatman and a missionary respectively, are the unlikely middle-aged couple that set forth on this foolhardy mission, and beyond everything else they are what keep this film afloat. Having previously encountered Bogie only as the hard-edged arrogant bitter protagonist (Maltese Falcon, Big Sleep, Treasure of Sierra Madre), it was a pleasure to see him going sweet, and he shows a fine talent for comedy here. Hepburn gives her character the required hauteur without appearing unnecesarily mean (although perhaps the scene where she icily dumps all of Bogart's gin into the river is a close shave), and the chemistry between her and Bogie makes their emerging romance endearing enough to gloss over its convenience. Yes, there are thrills, when the boat has to be steered over rapids, when they go past a German fort with snipers firing, when they get stuck in reed-choked swamp territory. But African Queen, as scripted by Huston and James Agee, is at heart a romance, one that is charming not cloying, innocent not naive. The dialog drips with wit and intelligence, and, equally important, it remains consistent to the characters. A lot of the film was shot on location in Africa which invaluably builds the atmosphere and mood, and Jack Cardiff's technicolor photography is not in the same league as some of his work for Powell & Pressburger, but it makes for a sufficiently sturdy and pleasant presentation.

African Queen is a wonderful example of the old-school romantic adventure. Curl up with your beloved (or just yourself), a big tub of popcorn in hand and settle down to enjoy a genuine example of Hollywood movie magic.

For those that want to know, Paramount's blu-ray gives a lush video presentation of the film. The image is not always pin-sharp but that would mostly be due to the technology and shooting style of the film. Primary colors when seen have a nice pop and there is still a good amount of fine detail to be enjoyed. The Dolby digital mono soundtrack is decent but ordinary and one wonders if a lossless track even in mono would have had more punch. The sole extra on the Paramount BD is a very worthy one, an hour-long retrospective that comprehensively covers the making of this classic, with new and archival interviews and lots of production stills (Better yet, it is also in HD). For those in the UK, there is a blu-ray by ITV which features the same presentation of the film and the retrospective, and in addition features a feature commentary by Jack Cardiff.
Posted by Suresh S 2 comments: