*SPOILER WARNING for those that haven't watched at least the Rajesh Khanna - Nanda film of Ittefaq, because I am going to discuss plot reveals* 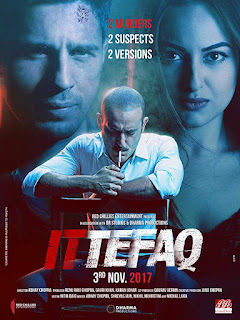 The success and longevity of mystery plots is directly related to how well they are constructed: Stapleton must always be the arch-villain of the Hound of the Baskervilles, and no adaptation of Murder on the Orient Express will change its central solution. Elements may be modified and rearranged in reinterpreting them, but fooling around with the core is akin to disturbing the structural pillar of a tower; get too clever and it all comes crashing down. My memory of the original Ittefaq (how original? IMDB tells me the 1969 version was an unofficial "remake" of a '64 film called Signpost to Murder) is a little hazy since I watched it when fairly young, but the part where Nanda's hand is revealed hit home strongly because of how her character was portrayed till then - a frightened, disheveled overripe hausfrau who we could easily accept as a victim. Even her attempts to "seduce" the crazed intruder in her home were tinged with the perspective of a hostage desperate to escape her captor.

With the attractive promise of a short running time (104 min, identical to the predecessor?) and absence of song breaks Ittefaq '17 begins decently, setting up the core mystery fairly fast and adopting the Rashomon device of telling multiple POV narratives. I never understood the arbitrary "solve this crime in 3 days" deadline. It did not make sense in terms of the justification provided, nor did it add any specific urgency to the investigation. Logical leaps are acceptable in suspense stories when they are successfully masked by interesting character play and immersion. This is where Naya Ittefaq drops the ball on its toes. The Rashomon device requires a sophisticated level of deception and ambiguity (ask the makers of the much-reviled Basic). It is easier to accept a malleable truth between stories when there is a sufficient tonal consistency to show the plausibility of either facet. But the differing sides told by Sid Malhotra and Sonakshi Sinha are contrary to the point of caricature. In each perspective the characters behave in such archly different manner that neither tale appears credible.

As for the performances, what we have here is the result of either indifferent acting, incompetent direction or both. I recall saying around a year back "I have a soft corner for Sonakshi Sinha who I think is one of the promising actors of today..." Now I must eat my words with disappointment. Caked in enough pancake to make breakfast for the entire Kaurava clan, Sonakshi delivers a pedestrian turn that conveys little of her character's distress. Even in her own story, her reaction to a possible crazed killer in her house is akin to being annoyed with the Amazon delivery guy because the lahenga she ordered (COD, of course) arrived in the wrong color. Rajesh Khanna in the '69 film may be accused of hamming but Sid Malhotra's definition of restraint is a continually constipated stare, about as convincing and less entertaining. Akshaye Khanna essays the same character he did in Mom and once again suffers the penalty for the writers' laziness - Here he doesn't even have a Nawazuddin Siddique to play against, and his sleuth's swagger comes across as blowhard stupidity because the investigation is conducted in the most bone-headed way possible. Interrogation of suspects is an adjunct to objective forensic evidence, not a substitute for it, Sherlock Dev. As for the other characters, the less said the better. The cops appear to have been tutored at Keystone Academy and the writers' stabs (ha!) at generating casual banter are not worth the toilet paper that is the focus of one such scene.

And then of course, the TWIST. If the makers of Primal Fear got royalties for every time a movie took misbegotten inspiration from its final scene, they'd amass enough riches to smoke 100$ bill hand-rolled cigarettes for three generations. Once again, it's a twist that destabilizes the structure of the narrative, undermines everything you have seen before, and makes you feel a fool for having wasted your time on this Watdafaq.
Posted by Suresh S No comments: 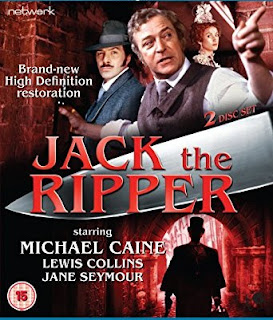 1988's Jack the Ripper (JtR) made an impression on me when I saw it as a kid on Indian TV where it was screened in its original 2 part mini-series avatar, possibly in the same year or only slightly after its UK premiere. It was possibly the first time I'd heard of the killer although now I can't be sure (because around the time I also had a World's Greatest Serial Killers book. Like the Sherlock Holmes series with Jeremy Brett, this was another prestige production from British TV, shot on 35mm film with handsome production design recreating Gaslight London, and thereby rendered immediately attractive to me. Childhood favorites can often be disappointing from a more mature POV, so how does this one hold up?
This telling of JtR purports to be a researched account of the original killings and their investigation under Inspector Fredrick Abberline, with a preamble stating, “Our story is based on extensive research, including a review of the official files by special permission of the Home Office and interviews with leading criminologists and Scotland Yard officials.” As horror/fantasy specialist critic Richard Scheib points out in his (ha!) surgical dissection of the film, the claim is rather bogus. The writers are guilty of cherry-picking some facts of the affair, while ignoring others and exaggerating or outright inventing new elements for drama or sensation. While that is certainly a failing, as is a certain half-bakedness that comes from shoehorning characters simply to fit in US marquee friendly names (like Jane Seymour as a former flame of Abberline), the film manages to keep up pace and maintain interest. Without giving out spoilers, the solution offered in this interpretation is even less convincing than the Freemason conspiracy. But unlike the aggravating movie they made of From Hell, JtR manages to be entertaining. Michael Caine is a sturdy Abberline (even if they invent a drinking problem for the character and seem to cram in unnecessary shouting scenes to make him earn his star-actor's paycheck). The production design and Alan Hume's cinematography bring the period to life and editor Keith Palmer does a good job of keeping the momentum going.

Network's 2-blu-ray set contains the entire 2-episode airing on the first disc in the original 4:3 aspect ratio with authentic lossless stereo. The image (based off a fresh 2K scan of original materials) looks quite good, supportive of the textures of the production and Hume's evocative visuals of night-time Victorian London. On rare occasions the accents can slightly obscure a line but optional English subtitles are present for any such difficulties. There are about 20 mins of extras of a previous run for this project when it was going to be a lower budget videotape production with another actor (Barry Foster) playing Abberline - After American producers showed interest it was remounted as a lavish 35mm production and Michael Caine was solicited as a star name. The second disc (which I haven't yet seen contains a re-edit of the series as a single film, framed for 16:9 widescreen with specially commissioned 5.1 audio. I might give it a look on some future occasion.
Posted by Suresh S No comments: 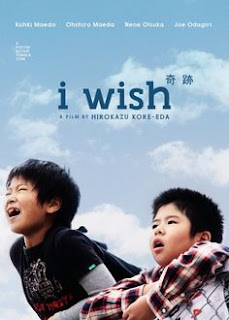 I Wish (or Miracle, as the original title Kiseki translates to) is mainly the stories of two brothers Koichi And Ryu (played by real life siblings Koki and Oshiro Maeda), each staying with one of their estranged parents in a different town. They take to their predicament in different ways. Koichi, living with his mum at her parents' in Kagoshima - a town adjoining the Sakurajima volcano - becomes more introverted and sad, obsessively wiping off the volcanic ash, wondering constantly how people could live in a place like that. His fervent desire is for the entire family to live together again, and he wishes for the volcano to erupt so he and his mum are forced to leave. The younger Ryu, living with his dad in Fukuoka, becomes almost manically cheerful and enthusiastic, zealously doing the household chores (while indie rocker dad and his buddies chill out), taking joy in gardening and hanging out with his schoolmates. While he is close to his brother he is less enthusiastic about a reunion because he does not want to relive the bickering between his parents. On hearing a rumor that when two local bullet trains pass each other, they generate a magic field that grants the wish of anyone nearby, Koichi hatches a plan with his buddies to travel to a point where they can witness this phenomenon and make their wish. Ryu and his friends also join in and we become part of an adventure / quest undertaken by these kids. Apart from K and R, we get vignettes of the lives of their friends, and of the elders they interact with.
I blind-bought Arrow's 3-film Koreeda Set on account of the comparisons of his work with Yasujiro Ozu. In his quiet observation of people and rituals, I can see where those impressions come from, although Koreeda does not use the austere formal aesthetic that defines Ozu - the camera is not still and he does not use classic framing. But you can see Ozu's spirit in the warm and affectionate portrayal of people - the kids of course, but also the adults around them. When they go off on their adventure, the adults directly or surreptitiously help them out, and no one seems worried about them encountering pedophiles or serial murderers (Taken's Dad Liam Neeson would be aghast at this carelessness). But at the same time, Kore-eda does not go for some fake treacly happy ending in which everyone gets what they want. While the film runs somewhat long for its style and errs a little much on the side of cute (the actor playing Ryu is total Kawaii), his ability to portray kids as real people with moods and personalities makes I Wish a charming experience.
Posted by Suresh S No comments: