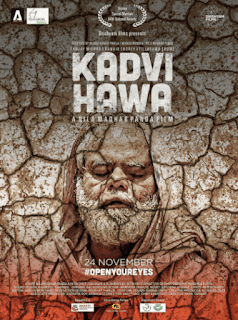 Kadvi Hawa (KH) is undoubtedly a sincere film, but it's unfortunately not a gripping one. KH reminds me of one of the likely reasons why the Indian parallel film movement of the 70's and early 80's petered out - Repeated tales of exploitation, poverty, social injustice told in a rote solemn manner, their only aim to stand on a soapbox and awaken the collective social conscience (and maybe win awards for the same). But at the cinema people rarely bond with issues, they bond with interesting characters and stories, and the trick is to slide in the bolus of your agenda within a narrative an audience is interested to immerse itself in. Here we see many of the tired cliches: old man (Sanjay Mishra) waiting for hours at an institution only to be rudely turned away, painstakingly detailed daily routine of poor farmer's family, long shots of arid vistas...Art Phillum Class 101.
The publicity campaign made KH look like it was going to provide some kind of dramatized exploration of how India was reeling under climate change, but the bulk of the film is far smaller in scope, dealing exclusively with the issue of drought-hit farmers in Mahua (Bihar?) suffering from piling debt. One does not argue that climate change played a big role in their problems but there is no holistic perspective. There are flashes of such possibilities, like when the loan collector (Ranvir Sheorey) talks about his place in Odisha being tormented by floods, but it's just delivered in rapid chunks of exposition. On the whole this film makes a disjointed case about climate change as an issue, veering between barely mumbling about it or making ham-handed statements, like when a kid in school says he knows only two seasons because the rain falls for only a few days each year. In my view the film needed a multi-layered exploration like what Nishikant Kamat achieved with Mumbai Meri Jaan or some of Shyam Benegal's films that dealt with social injustice.

Which is not to say the film is unworthy. Like I said earlier, it has a sincere intent. The central plot point of the old man looking to attenuate his son's loan by acting as an informer about other defaulters to the loan collector is within itself dramatically sound, and actors like Mishra and Sheorey bring a lot of credibility to their parts. As an episode in a television anthology series, it may have been brilliant, but as a 90 odd min feature film, KH does not lift the kind of intellectual or dramatic weight that compels your attention through the grim proceedings. 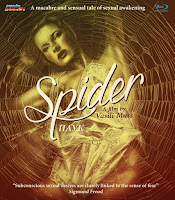 Spider aka Zirneklis is a Latvian Nightmare on Elm Street, taking a little detour by way of Valerie and her Weekend of Wonders. Okay, it's not as ambitious as that combination sounds but it's a nifty erotic horror film that doesn't outstay its welcome, and exquisitely designed to boot.
Our nubile heroine Vita (the gorgeous Aurelia Anuzhite, both leered at and revered by the camera) is in the course of sitting for a painting of the Virgin Mary - ah, symbolism - assaulted by the creepy artist Albert. He then seems to invade her dreams as well, perhaps even taking on the form of the giant spider that ravishes her by night. Prescribed a course of rest in the countryside for her "self-suggested delusions", she goes to her aunt's family (inciting a bit of sexual tension there), but her visions appear to follow her. 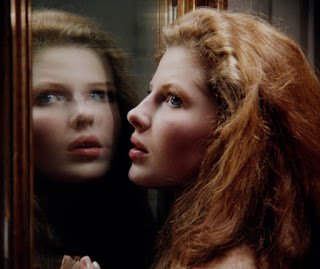 The narrative is slight and, like with the Italian giallo films, more a bag of contrivances to hang the visual set-pieces. But oh, what lovely visuals they are, bringing to mind the object-fetish style of Walerian Borowczyk: A fragile painterly atmosphere permeates most of the film - occasionally dipping into psychedelic territory - counterpointed by a moody, jangly electronic score (even the somewhat tinny sound appears to be by design). There are some memorable scenes towards the early part of the film where paintings appear to come to life. The horror / gore effects are also very nicely done, and I have to say stop-motion spiders look creepier than real spiders. Director Vasili Mass certainly shows a lot of chutzpah and it's sad to see that he didn't direct anything else. 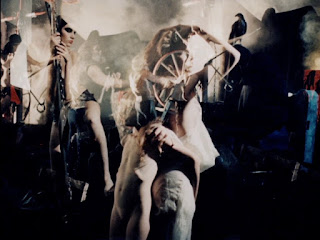 In his review, Blu-ray.com's resident arthouse critic Svet Atanasov attributes a layered socio-political metaphor to the film, comparing it to Andrzej Zulawski's Possession and writer Mikhail Bulgakov's The Master and Margarita. I'm afraid I really don't find that connection, perhaps the director interview on my disc will enlighten me. Based on a recent 4K restoration of original film elements, Mondo Macabro's blu-ray presentation wonderfully replicates the unique look of the film. Individual frames could well be hung up in galleries, it's that good.
Posted by Suresh S No comments: 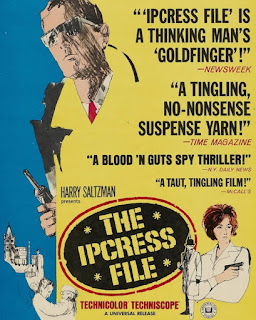 Based on a novel by Len Deighton (which I haven't read), The Ipcress File features protagonist Harry Palmer (Michael Caine - young and dashing, a far cry from the desultory valet of the Dark Knight series) is a secret service agent, but grittier and working class compared to James Bond (the comparison is valid since the film was produced by regular Bond series co-producer Harry Saltzman). While Bond's adventures have him traipsing around exotic foreign landscapes, Palmer (at least in this story) is mostly restricted to London and the nearby countryside. Bond can afford to gulp down Beluga caviar and Bollinger champagne without worrying about the expense account, but poor Harry earns only 1300 quid a year and hopes a promised raise will allow him to buy a coveted infra-red grill to satisfy his gourmet-on-a-budget whims.

The script involves the usual convolutions of intrigue, red herrings and double agents any self-respecting Cold War era spy caper would feature and they are done well. I must admit here that I am quite biased towards the old-school Brit "stiff upper lip" tone. Visually the film is quite stylish (DoP Otto Heller of Peeping Tom fame), sometimes to an extreme, with for example shots from the POV of a ceiling lamp or a outdoor fight sequence captured from inside an empty phone both. But director Sidney Furie ensures that it's all good pacy fun and never ceases to be interesting. Caine is in top form here and has strong support from a stellar British cast (including the ultra-manly Nigel Green). The film has more intrigue than action or spectacle so don't expect outrageous stunts but that's intentional - Palmer's world is designed to be an antithesis to the ultra-glamorous Bond-verse, and makes a forceful impact. The success of the film led to stardom and bigger roles for Caine (Italian Job, Get Carter), and though I suspect it will be a case of diminishing returns, I am tempted to try out the further installments of the franchise, including Guy Hamilton's Funeral in Berlin and Ken (seriously?) Russell's Billion Dollar Brain.