Pauline is pretty, intelligent and thoughtful. Pauline listens more than she talks, and is less quick to judge than the people around her. Pauline is 15. The next installment in Eric Rohmer's Comedies and Proverbs series after The Aviator's Wife and A Good Marriage, Pauline at the Beach (PatB) is again an  unhurried exercise in characters speaking on and on and, somewhere in that process, revealing a little of themselves. 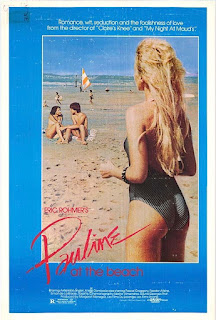 Pauline (Amanda Langlet) is holidaying in a seaside town with her older cousin, the glamorous Marion (Arielle Dombasle). Marion has just finished with her divorce, and the beginning of the film is quizzing Pauline about her love life. Pauline reveals herself to be a blank slate, not yet marked by any serious "affaires de coeur". While at the beach (a frequent location justifying its name in the title), they come across Pierre (Pascal Greggory), a former lover of Marion who still worships her and would like nothing better than for her to accept him. But Marion is no longer interested in Pierre romantically (certainly not the burning passion she wishes to experience in love), and his petty jealousy only puts her off. She is aroused by Henri (Feodor Atkine), an older more worldly-wise man they ironically meet through Pierre. But Marion wants an old-fashioned passionate romance and fidelity, and Henri, with his nomadic roving nature may not be willing to give her that. Apart from the menage-a-trois, there's also the teen Pauline meets at the beach, who she likes enough to hang around with.

Based on the films I have seen above, Rohmer's special ability is to take the exaggerated emotional situations of his characters and put it through a light of realism that exposes the absurdity or pettiness of it while still not making caricatures of them. In PatB, this is less successful than in the previous pictures.  I felt that the characters and situations were not as nuanced as the ones in The Aviator's Wife and A Good Marriage. This is most apparent in the section of the film where a misunderstanding occurs, inadvertently initiated by Henri and perpetuated by Pierre. It is a gauche device, that feels like it dropped in from some dated melodrama. To be fair, it is resolved in a quiet Rohmer-esque fashion (the last scene between Pauline and Marion is lovely), but it does stick out. Pierre's character is also half-drawn; his petty behavior makes it hard to ever appreciate his side of the story.

Of course, the main character here is Pauline, and as Amanda Langlet plays her under Rohmer's direction, comes off very well. We understand and appreciate Pauline as an intelligent adolescent girl who listens to several opinions, but ultimately goes by her gut feeling and makes her own decisions. She seems more balanced than the adults around her. On the whole a decent watch, but I am hoping for the further films in this series to be better.

Now that the year will be coming to an end in another week, 'tis time to continue the saga of movie opinions. I'm laying down my summarized views of 2021 movies I saw between Aug-Dec 2021 (My take on 2001 Jan-Jul movies HERE). 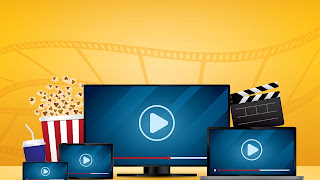 Shershaah (Hindi, Amazon Prime) As a film, this biopic comes off all too formulaic and pat, with the shallow feel of an overlong army recruitment promo rather than the emotionally involving saga of a brave warrior.

#Home (Malayalam, Amazon Prime) Shallow as an ad-film for a retirement finance plan, yet stretching to a vegetative 160 min, this one wallows in blandness. Too many characters introduced without giving them enough to do. The actors are almost uniformly solid (Indrans shines as the mild mannered indulgent father), but the script foundations are too weak and shaky for this #home to stand up. Site review HERE

Bell Bottom (Hindi, Amazon Prime) While the bulk of Bell Bottom suffers from Akshaykumarism and all that the syndrome implies, it's actually less of a wince-fest than the other movies he has done in recent past. There are occasional sequences where the film springs to life, holding true to its 70's Bollywood hailing spirit. With an actor who has less of an off-screen agenda this could have been a significantly more entertaining movie.

Aarkkariyam (Malayalam, Amazon Prime) Aarkkariyam may be described as a moral mystery with a warm humanist streak. The film errs on the side of rambling, but it is avoids unnecessary dramatics or that dreadful habit of superfluous twists that destabilize the narrative. Beautiful writing and performances make it worth recommending at least as a once-watch. Site review HERE

Shang-Chi (English, Hotstar) Up to about halfways, Shang-Chi and the Something Something was fakking boring. Even after that it never achieves greatness but Ben Kingsley has fun and the climax (with its nods to Return of the Jedi's father-son lighsaber duel) generates sufficient enthusiasm to meet the threshold for a boilerplate marvel feature.

A Ghost Waits (English) While the movie (which mixes elements of The Ghost and Mrs. Muir with Beetlejuice) was pleasant, it was never more than that. There is a sweetness to the romance element, but I felt the makers should have put more bite into the scare and humor segments and not have them be so timid / perfunctory as to be nondescript. Decent as a one-time watch (I saw it on the Arrow blu-ray).

Jai Bhim (Tamil, Amazon Prime) This is reminiscent of 90's Indian movies that mixed scenes of gruesome torture / violence with mainstream masala sentiment. The victims have little personality other than being innocent oppressed folks, and the bad guys are cardboard evil. For a film that so obviously fictionalizes many elements of its story, they could have tried to come up with more interesting writing.

Ghostbusters: Afterlife (English) Notable as my first post-lockdown cinema trip. This was a decent fun experience. It succeeds in keeping the fan service at a tolerable level and concentrating on giving likable characters (played by wonderfully cast young actors). It also, succeeds, without banging too hard on cheap references, to generate the sense of adventure Hollywood PG-13 movies had in the late 70's and 80's.

Still need to see (and would love to get more recommendations from y'all):