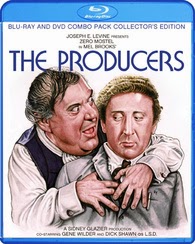 One of the funniest movies ever made. The brilliant Zero Mostel and Gene Wilder come together in Mel Brooks' perennial laugh riot about a scam to raise funds for the worst Broadway play of all time "Springtime for Hitler". From beginning to end, this movie is like being on laughing gas it is so darn hilarious. The writing is amazing and the supporting cast is equally brilliant.
I gifted my previous 2-DVD set of the film for a friend's birthday otherwise I might not have got this BD. The transfer is quite good, but not a must-upgrade if you already own it on DVD. It carries over all the extras of the DVD version, I don't know if there're any new ones. 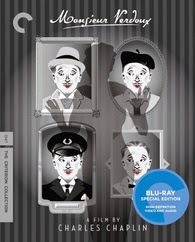 An unlikely Chaplin film, one where he plays a Bluebeard, a man that woos and marries older women for their money, then murders them. The murdering is generally off-screen, although we see some bumbling failed attempts. The film walks an uneasily line between its slapstick and serious moments, but has a couple of powerful scenes where the atheistic Verdoux expounds on his world-view and tries to defend his actions in the context of survival in times of war and scarcity.
The transfer is quite pleasing with deep contrast and excellent detail. Extras include a feature on the context in which Verdoux was made, and one on Chaplin's treatment by the American Press, especially after he was denounced as a Communist sympathizer. 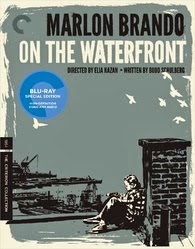 If you've seen Aamir Khan's Ghulam, this is the movie it was shamelessly ripping off. Marlon Brando plays a small-time thug running errands for the local union boss (Lee J. Cobb). Brando's brother is a partner of the boss and involved in all his mafioso activities. When a local is killed after giving testimony to the crime commission and Brando falls in love with the man's sister, he faces a dilemma of speaking out what he knows and facing the wrath of the mob. A taut script and excellent direction (Elia Kazan) with some fantastic shadow-drenched visuals from the great Boris Kaufman.
Criterion presents the film in 3 different aspect ratios (1.37:1, 1.66:1 and 1.85:1) which if you ask me is a bit of overkill. I saw the film in the middle ratio and the transfer (made from a 4K scan) is quite terrific.


The Man Who Knew Too Much 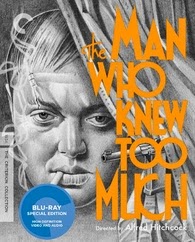 A Hitchcock film from when he was still working in Britain. A dying man gives an acquaintance family a message that talks about a political assassination. The daughter of the family is kidnapped and the parents warned that if they pass on the message to the authorities their daughter will be killed. Father then goes on a rather foolish mission to rescue his daughter. The story is quite slight and the staging is less professional than Alfie's later films set in Hollywood, but it's good fun with a pleasing old-school British atmosphere. Peter Lorre as the lead bad guy is quite terrific, expressing both fun and menace. You can see several early glimmers of Hitchcock's trademark visual style.
The transfer is pretty good considering the age and state of the film. It is soft and grainy but organic looking. The sound is clear if expectedly boxy. 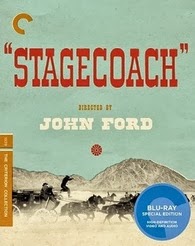 Saw most of the extras on Stagecoach, including the feature length commentary track. The commentary by Western scholar Jim Kitses was decent but also quite boring in parts, I wonder if it might have been better to have a condensed video essay instead. The featurette on stuntman Yakima Canutt who did some rather hair-raising stunts jumping from horse to horse, and the one with Ford biographer Peter Bogadnovich who talks about Harry Goulding, the man who introduced John Ford to the now iconic Monument Valley where Ford shot many of his Westerns, are pretty darn cool. There is also a near feature-length 1976 interview with John Ford which promises to be interesting.
The transfer, as I saw from the commentary, is excellent for what is essentially an old lower-budget feature with good contrast and fine grain. 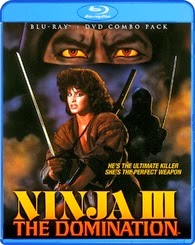 N3:TD (which has nothing to do with any of its Ninja movie predecessors) is a Ninja meets Exorcist mashup where an evil Ninja who cuts up a scientist and half the local police department for seemingly no reason at all transfers his soul into a spunky aerobics girl (Lucinda Dickey

). Spunky girl at various moments gets possessed and dons Ninja suit to kill off the cops that shot down the evil Ninja. It's totally absurd and packed with all manner of 80's cheese. I saw this film more than a dozen times a kid, to the extent where the VHS rental guy began to hide the tape during my visit to the store. It doesn't hold up quite as well now, but is still good brainless fun.
Scream Factory's transfer is quite amazing, from the perspective of a guy who had only seen the film in pan-n-scanned VHS form till now. Seeing it in the 16:9 ratio is quite a revelation. The DTS-HD MA 2.0 track is not going to win any awards for immersion, and the sound effects seem to be set a level higher than all the dialog and music, but this is quite likely the original mix for this low-budget exploitation flick and works. The disc has a commentary and a photo gallery for extras but inexplicably no scene selection menu.


Humanoids from The Deep aka Monster 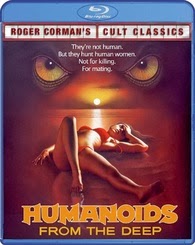 This is a pleasingly gory creature feature from Roger Corman's studio. It was directed by a woman Barbara Peeters, but had additional footage inserted from a second unit shoot because Corman felt that Peeters' cut did not have the requisite sexploitation content he had mandated (the evil creatures here rape and impregnate naked / semi-naked local women). This is alluded to in the making of docu where a distinct element of embarrassment hovers over most of the crew as they discuss the changes made by Corman to Peeters' film (she herself is not seen here). That said, the film is a lot more distinctive on account of its exploitative elements.
Shout Factory's 16:9 transfer (again for me a revelation from the 4:3 cropped version I'd seen as a kid) wonderfully recreates the look of the film. It's on the softer side, but lush and colorful, and the grain pattern is not tampered with. The LPCM 2.0 track faithfully presents the original mix of the film. The aforementioned making of is quite interesting with a lot of input from crew members like composer James Horner and editor Michael Goldblatt who went on to more prestigious jobs.
Posted by Suresh S No comments: 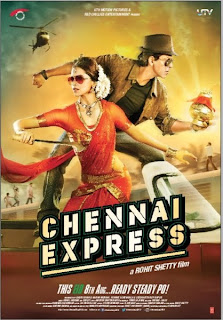 Call it a case of the Stockholm Syndrome, if you will. Considering my previous history of the films of both Rohit Shetty and that walking pile of hubris, Shah Rukh Khan, I went in for this movie expecting something of a major migraine. The trip was more on account of my mum who, having seen poster images of female lead Deepika Padukone in a traditional South Indian silk saree and gajra, declared the film as a “must-be-seen”. What took me for a loop from very early on is how light-footed and irreverent Chennai Express is in its adoption of masala cinema mores, even in its digs at SRK's own repertoire of self-aggrandizing dreck. An early scene which begins as a wince-inducing rehash of the insufferable climactic reunion from Dilwale Dulhania Le Jayenge (more on the DDLJ connections as we go ahead), veers into a sharply funny send-up of the same. This scene also establishes the complete madcap tone of the film – the heroine who has escaped from her hometown to Mumbai is running towards a train that is headed back there. If after this outright proclamation you're going to complain about lapses of logic and coherence in this script, you might as well point out plot holes in Tom and Jerry cartoons, because that's what most of the movie is, a zany live-action cartoon.

I was apprehensive that CE would be an uneasy mishmash of Shetty's and SRK's trademarks, but SRK slips comfortably into Shetty's setup, displaying a rare self-deprecating humility. Bar exceptions like Kabhi Haan Kabhi Naa, I find it hard to sit through 10 min of a SRK performance without wanting to punch him in the mouth several times, but here he is (gasp!) fairly likable. Of course, in a certain sense, this film is like Terminator 3 (which also had mixed, predominantly negative reviews), in that it needed the legacy of SRK's brand for the spoofing to hit home. I suspect a good modicum of ad-libbing and improvisation was worked out between him and Rohit Shetty in the course of making the film, and in a nice way, it is reflected in the final product.

What is also interesting is the film's mixture of Hindi and Tamil elements. Especially in the segments set in Tamilnadu, CE riffs on mainstream Tamil cinema as well, with a copious amount of (non-subtitled) Tamil dialog and the presence in pivotal and minor roles of well known actors of Chennai movie-dom. One can see it as a mirroring of the culture clash in the story. In that respect, the film has maximum resonance with Hindi film viewers that also have some familiarity with Southie cinema – if you do not recognize actors like Sathyaraj, Delhi Ganesh and others from their long-time legacy in Tamil films, you will not fully appreciate their presence in CE. Deepika Padukone and Niketan Dheer as the brawny baddie speak Tamil in accents atrocious to the point of being incomprehensible, but that again can be seen as a reflection of South Indian cinema's proclivity towards importing language-impaired leading ladies and villains.

Yes, there are pacing issues – one too many songs and a cliched romance make for some very slack moments – but the major disappointment for me was the climax, which, especially in the wake of all the winking and fun-poking is a surprisingly straight-faced and therefore (yep, here it comes) wince-inducing rehash of the insufferable climactic reunion from DDLJ. The hero makes a speech about the tragedy of how in independent India, women are still held captive by patriarchy, after which he takes part in a slugging contest to win the hand of the bride who looks helplessly on, how's that for irony? So that's a bitter bit, but most of CE is palatably breezy and unlike many other so-called “family entertainers” actually mindful of keeping its violence and double entendre in check.
Posted by Suresh S No comments: