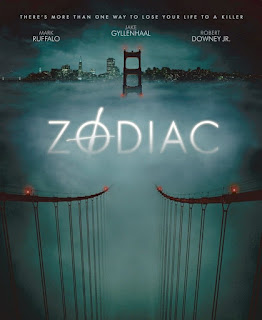 Last night I re-watched David Fincher's 2007 movie Zodiac and the film still manages to grip. Zodiac looks at the investigation of a series of unsolved murders during the late 60's and perhaps early 70's in the San Francisco Bay Area, committed by an intelligent but crazy killer who called himself the Zodiac, and after the acts sent taunting messages to the police and the press. This led to significant panic in the region, especially when the Zodiac in a published letter speculated about attacking school-buses and killing children, a plot point used in the first Dirty Harry (1971), which based its cold-blooded villain on the Zodiac.

In Fincher's film we see the investigation from the point of view of SFPD investigators David Toschi (Mark Ruffalo) and Bill Armstrong (Anthony Edwards). The Zodiac's letters and cryptograms sent to the SF Chronicle newspaper also attract the attention of its crime journalist Paul Avery (Robert Downey Jr) and cartoonist Robert Graysmith (Jake Gyllenhaal). While Avery's speculation on the Zodiac being a latent homosexual earned him a death threat (which the film suggests led to Avery's deterioration along with his alcoholism), Graysmith became obsessed with identifying the killer, unofficially interacting with the police and compiling information over several years, even to the detriment of his family life.

Zodiac is mainly a procedural, interested in the details of the investigation, the politics of cooperation between different jurisdictions, the landslide of drudge-work and official pressure once the killings become public knowledge. Unlike Fincher's previous serial killer feature Se7en, this film is not particularly interested in the killer's motivation or in exploring his psyche. And despite its lack of a conclusive denouement (although there were some strong suspects the killer was never identified) Zodiac also does not have the nihilistic aftertaste which defined its predecessor. The case dies down, Toschi and Graysmith carry on with their lives.

Under Fincher's measured vision, Zodiac for all its sprawl is an unrelentingly focused film, eschewing high style but still keeping us engaged all through its nearly 160min running time. Especially in Ruffalo's Toschi, we see an investigator doggedly pursue his quest, growing older and more frustrated as time wears on with no clear answers forthcoming. Gyllenaal's Graysmith goes from cheerfully curious to disturbingly obsessed. He is so convinced of a suspect's guilt he says, "Just because you can't prove it doesn't mean it's not true" only for Toschi to respond ironically with "Easy, Dirty Harry".

A few notes on the blu-ray release for those interested:

I got Paramount's 2-BD set in 2011 for nearly 30$ when it reported to be going OOP. The only other option that time was the UK release in which film and HD extras were all stuffed onto a single disc (and lossy Dolby instead of the US release's TrueHD track). unfortunately for me, in this case, what going OOP meant was that Paramount's film library was going to be distributed by Warner Bros in the US, and so that same package came to be re-released by Warner (and later by Paramount again), frequently hitting the sub-10$ bargain bins. Gnaar! Oh well, so long as one doesn't compare it's still a strong offering for the price.

Zodiac was shot digitally, and although I think 35mm would have been stunning, it looks quite good (Fincher's penchant for yellow filters aside). It is the first time since getting a surround setup that I am watching the film and I'm shocked at how front-loaded the track is. Most of the time I can't hear anything significant from the rear speakers. Dialog occasionally struggles for clarity above the music and ambient effects.

I have seen most of the extras on previous viewings but outlining them for completion's sake: On the feature disc there are 2 commentary tracks, one with Fincher and one with the actors, writers and whoa, James Ellroy. Disc 2 contains a multi-part making of the film, showcasing Fincher's obsessive penchant for authenticity of props and huge number of retakes. Of course everyone is in awe of the director and gushes over the opportunity to work with him. There is also a feature-length documentary covering the confirmed Zodiac murders, talking with investigating police personnel and survivors of those incidents.
Posted by Suresh S No comments:

You've heard of the term musician's musician. Clark Ashton Smith (CAS) was the fantasy writer's fantasy writer. He may be less known among the public at large than some of his contemporaries and several of the people that could regard him as a spiritual teacher, Smith's otherworldly vision and felicity of expression puts him in the top echelons of the genre. 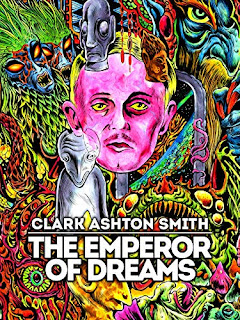 The Emperor of Dreams (EoD) (taken from the opening lines to Smith's poem The Hashish-Eater "Bow down: I am the emperor of dreams") is a serious look at the life and work of this reclusive titan. Going in chronological order, the documentary first looks at CAS as a shy and frequently sick child growing up in a remote part of California, quitting school early for self-education aided by his photographic memory and voracious appetite for literature, particularly poetry. Poetry was Smith's calling to early fame, and the film discusses the support he got from serious American poets like George Sterling for his first book of poems, even proclaimed by one critic as the "Keats of the Pacific". The fame was short-lived. EoD suggests that Smith's constant health issues combined with a severe shyness (although conversely he was something of a local ladies' man) meant that he was confined to his neighborhood of Auburn (he apparently demurred from traveling out of Auburn to meet Ambrose Bierce and Jack London). His commitment to poetry that rose purely from the realms of fantastic imagination (like Lord Dunsany) also meant that his work would in time go out of fashion.
Somewhere in this course his work attracted the notice and adulation of his contemporary HP Lovecraft (HPL), which led to a deep friendship over correspondence that lasted more than 15 years (till Lovecraft's death in 1937). It was HPL who encouraged Smith to write fiction prose, even if that was not his preferred medium. Like Lovecraft (and Robert E. Howard) CAS was frequently published in the Weird Tales magazine, which went some way to help support himself and his aging parents, but he also had to take on several odd jobs involving labor. The film  examines Smith's output in fiction, comparing his style to Lovecraft. We also see his artistic expression through sketches and paintings, and sculpture. CAS frequently illustrated his own and other writers' stories in magazines. For the famously erotophobic Lovecraft's tale of The Lurking Fear, Smith produced a drawing of trees that look rather like sensuous nudes.

Once Smith's parents and his friend Lovecraft passed away, it would seem he lost interest in writing any more, depending solely on his manual skills (woodcutter, fruit-picker), and often lived in poverty. Although weird fiction patron August Derleth gave CAS's fiction a second lease of life by releasing his stories in limited edition volumes, he could not persuade Smith to produce new work. For a long while Smith lived alone as a recluse (he was said to be, under the circumstances, a gracious host to visitors), but at the ripe age of 60 he entered into matrimony with a nearly 20 year younger Carol Dorman, who had children from a previous marriage. Unlike with his friend Lovecraft, married life seemed to agree with Smith (although he was distraught when he lost his Auburn home to fire) and lasted 8 years till his death in 1961.

EoD benefits from the contribution of CAS experts like Donald Sidney-Frier, Ron Hilger and Scott Connors. His close friendship and literary kinship with Lovecraft means that HPL disciples like ST Joshi and Wilum H Pugmire are on hand to talk about Smith and the association (Joshi also edited the first edition of CAS's work on Penguin Classics - The Dark Eidolon and Other Fantasies). Celebrity weird fiction Harlan Ellision professes his huge admiration for Smith's fiction (he does ramble on a bit towards the end). EoD also gives a brief look at the rare instances of films loosely inspired by CAS stories.

I have to say here that the documentary is not as juicy as Lovecraft: Fear of the Unknown. But that is essentially a function of its subject. Smith in comparison to Lovecraft was arguably less influential on the genre even if as a writer more skilled. His vision was, as some of the people speaking in the film suggest, too otherworldly to gain the same amount of traction. In Lovecraft's most celebrated work he starts off in the present day of his time and provides an exhilarating glimpse into another dimension, but Smith eschews any sense of connection with the real world. Also, the bulk of Smith's output in fiction is in short stories, not the novellas / near-novellas which made Lovecraft's name. Smith's work is far less concerned with plot and action than it is with creating an alien world we experience for a short while till the tale lasts. Hence the discussions of his work also tend to me more of an overview than a dissection of specific themes and plot points. Also his personal life wasn't filled with the quirks and controversial flaws that made Lovecraft a more luridly interesting study.

That said, for people who are acquainted with the work of CAS, and interested to know about the man, EoD is a fine introduction with some serious academic weight behind it. It is currently available via streaming on Amazon (US) Prime and Vimeo (I rented it from Vimeo for 4.99$), and you can also purchase a DVD or blu-ray from Hippocampus Press.
Posted by Suresh S No comments: