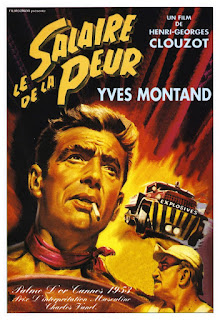 In Le Salaire de la Peur aka The Wages of Fear, an unnamed heat-drenched fly-infested South American town is home to drifters from around the world. These are washed-up, lonely men whose consolations are cheap liquor and small stakes gambling at the local watering hole. When newcomer Jo (Charles Vanel) schmoozes in with his spotless white suit and big goombah manner, he creates a stir and makes an instant crony of the local tough Mario (Yves Montand), the men linked by memories of a shared neighborhood in France and a sense of macho camaraderie. Indeed, as soon as Jo appears, Mario ditches both his barmaid girlfriend Linda (Vera Clouzot, H-G's wife of the time) and his loyal roommate the cherubic and loquacious Luigi (Folco Lulli); yes, fans of a certain video-game franchise will be tickled, more so since Luigi's appearance is very like the iconic animated mushroom-stomping plumber.

Every migrant in the town is looking for a chance to make some proper money and get out of there. This opportunity comes up when an US-owned oil company fighting a blaze at its local drilling site puts out a call for truck-drivers willing to deliver a large shipment of nitroglycerine that will be used to snuff out the fire. There are no safety measures available to cart this lethal cargo, which is why the company is recruiting anonymous drifters whose deaths no one will follow-up on. But for the princely sum of 2000$ apiece, these men are willing to take the risk. Two trucks, each manned by two drivers, set out to traverse the distance to the oilfields: Mario and Jo make one pair, while Luigi and the taciturn German expat Bimba (Peter van Eyck) form the other.

It takes about an hour of the film's running time to lead up to this scenario, but once the journey starts it is almost the sole focus of the rest of the narrative. The men must ride night and day to reach the site in time. Their cargo is sensitive to heat and vibrations. The terrain is rough; paradoxically the trucks must move quick over the rockiest bits to minimize the jolts (references to keeping the speedometer above a certain level to avoid an explosive jerk will remind 90's kids of a certain Keanu Reeves starrer). There are serious obstacles, including a rickety plank bridge, an immovable boulder that blocks the road and later, a lake of crude oil that truck and men must traverse.

The most interesting aspect of The Wages of Fear (based on a novel by Georges Arnaud) is the changing equation between its characters as they push forth in their hazardous course. Initially Jo is the heavy, the patron who twirls an eager Mario around his finger and bullies the other townsfolk with his revolver and his bravado. It is even suggested that he has 'eliminated' another fellow to be selected for the chance to earn the reward. But as the journey progresses, Jo's nerve gives way. He fidgets, he panics, he even tries to run away before he is dragged back by Mario, who grows increasingly disillusioned and contemptuous of the man he once deified. Both Vanel and Montand give their all to presenting the palpably credible transformation of their characters. In contrast Luigi, who had been earlier slapped around by Jo, throws off a cheerful courage and even the seemingly cold-hearted Bimba reveals an inner humanity. This is solid character drama wrapped around the mechanics of the tense suspense.

I do not agree with some of the criticisms leveled against Wages of Fear that the characters are shallow or that the film is unnecessarily bleak. Without spoiling events yes, it could have concluded on a more upbeat heroic note. But even if it is slightly overplayed in execution, there is nothing inherently wrong with the end as is, and it makes for a poignant conclusion for an equal parts thrilling and moving experience.

A few notes on my viewing experience:

More than a decade ago, a 148-min version of this film was released on blu-ray by the Criterion  label (described on their site as a 'New, restored high-definition digital transfer'), and that release was good enough for the time. Some time in 2017, a new 4K restoration of an even longer (152-min) version of the film sourced from the original camera negative was carried out. The UK release from the BFI is based on this restoration (I understand they postponed their previous 2016 release plans to avail of the new master). As expected (see screenshot comparisons), it is dramatically superior to the Criterion blu-ray in terms of image clarity, grain resolution and a much more refined contrast/gray-scale. Simply put, even if you own the Criterion blu-ray, this is a must-have upgrade (unless you want to wait for a possible 4K UHD announcement). 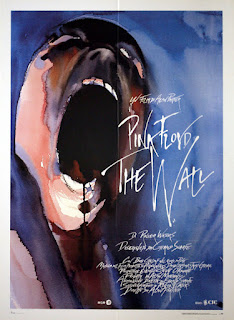 The Wall here refers to the 1982 film adaptation of the phenomenal Pink Floyd album directed by Alan Parker. The script was written by the band's main rudder of that era, Roger Waters, and is partly autobiographical: The lead character, a rock star named Pink (a trans-continental phone call he makes refers to him as Mr. Floyd), who in the midst of a successful career is a drugs and alcohol addled recluse disconnected from the world around him. We go into Pink's past as a lonely child whose father died as a soldier in WW2. Between an over-protective mother and an uncaring educational system (compared here to a meat-grinding machine), Pink grows up so emotionally stunted he cannot hold on to any relationship, and becomes incapable of forming new ones. He seems to spend all his non-working time watching TV, specifically re-runs of the populist British war film The Dambusters (apparently a favorite of Waters)

Waters originally conceived The Wall as a cinematic extension of the album that would incorporate footage from the planned live performances and animation sequences by the brilliant Gerald Scarfe. That idea changed as development moved ahead. Once Alan Parker was attached to direct the project, he convinced the team to drop the idea of using any stage footage of the band, and commit to the reality of the film's setting. Originally Waters was to play the lead himself, but the job went to another musician Bob Geldof, who fully commits to the craziness of the part without any sympathetic concessions (apparently one of Waters' bugbears with the film, and at least partly responsible for a very acrimonious working relationship between him and Parker).

Going back and forth in time, and slipping fluidly between reality and dream, The Wall is like an feature-length music video (long before concept-oriented music videos were a thing). There are astounding juxtapositions of live action with Scarfe's nightmarish animated drawings; the most startling one is when a woman's shadow on the wall morphs into a monster that terrorizes Pink. It may be remembered here that this was long before CG was used to any meaningful effect in films, and achieved purely by a mix of practical and optical techniques.

Watching the film and hearing its soundtrack so many years after the last time I played the album, I once again came to appreciate the brilliance of The Wall as a work of art. The album's ubiquitous popularity has of course led to a bunch of people calling it overrated, and I won't deny getting a little sick of the number of times Another Brick in the Wall Pt 2 played on MTV, but once you've allowed a little distance, the emotional charge of Waters' lyrics and the band's fantastic musical sensibilities hit you right in the chest. Several critics have complained that the film is just a sensory showcase with little depth, but I felt that the emotional sub-text comes across well enough. I am not entirely sure of Pink's fascist fantasy in the last act of the film, but I did not find that a serious drawback, and between the lead acting (even Klaus Kinski would have had a pause at Geldof's crazy turn) and the constantly inventive chutzpah on display, the film remains interesting up to the end.

PS: The Wall is an interesting comparison to Tommy, another rock opera by a talented egoistic artist: Pink Floyd's album is more consistently brilliant, especially because it knows when to draw its curtains. Similarly, Parker's film adaptation of The Wall makes for a far more watchable and engaging experience than Ken Russell's "Let's fling all manner of shit and see what sticks" approach to the film of Tommy.
Posted by Suresh S No comments:

In a story that triggers brief memories of Ealing Studios' (ha!) killer comedy Kind Hearts and Coronets, The Green Man's protagonist (Alistair Sim) is an unprepossessing assassin who specializes in bomb hits. The story starts with our bomber giving a self-laudatory account of his career, leading up to his latest endeavor in progress - giving an explosive sendoff to a pompous politician when the man is at an incognito weekend getaway.

Unfortunately the mousy secretary Sim had been pretending to court, to get info on his target's movements, becomes suspicious and insists on an explanation. Rather preposterously, she decides the best way to do this is to go alone to the home of the man she suspects of ulterior motives. Now Sim must silence her before she can spill the beans. For this he arranges to lure her into the heretofore untenanted neighboring house and dispatches his not entirely trustworthy assistant (John Chandos) to finish the job.

But in what seems the beginning of bad luck for him, the new tenants (Jill Adams and Colin Gordon) choose that very day to move in, and there's also a pushy vacuum cleaner salesman (George Cole). This leads to a merry rigmarole in which the characters run helter-skelter and even the corpse seems to have a life of its own. The final showdown is in the titular Green Man hotel, where the bomb is supposed to go off. Will Sim's plan succeed or will his neighbors be in time to stop it?

If you like classic dry British humor, there is much to enjoy in The Green Man. It is all very silly and not remotely believable, but that doesn't stop the film from being fun. In the script by Sidney Gilliat and Frank Launder (of The Lady Vanishes fame), there seems to be a mischievous skewering of the snooty class, with characters called Upshott, Willoughby-Cruft and (really now) Boughtflower being the target of a lot of the humor. Alistair Sim is a consummate comic actor, carrying off his scenes with aplomb, and George Cole (who in real life was a protege of Sim) as the bumbling but dogged appliance pusher is an excellent foil. The much-loved British character actor Terry-Thomas as the Boughtflower character has a rather smaller role than one would have liked (he would have been excellent as the pompous politician target).

The film was also produced by Gilliat and Launder, who had a great regard for Alistair Sim. In fact it is said Robert Day (previously a camera operator) was a director more in name than deed, and the film was ghost-helmed by Sim (with some uncredited aid from Basil Dearden, who is seen directing  the cast in behind the scenes stills of the film).

For those interested, a few words on the UK blu-ray edition from Studio Canal:

The blu-ray gives an excellent clean presentation of this vintage movie with nice filmic detail and good contrast. The mono sound is limited by the source material (don't expect any floor-rattling explosions, and there is some hiss) but clear enough for the dialog which is the main thing. Extras include 3 approximately half-hour featurettes (plus a short photo gallery video)