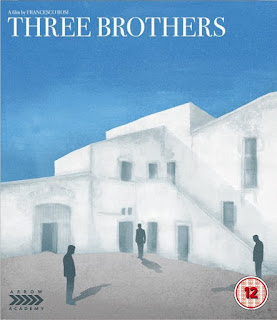 Last night I watched Three Brothers (3B) by Francesco Rosi on the blu-ray from Arrow.

The previous film by Rosi I'd seen - Salvatore Giuliano - was utterly brilliant, and so this was a blind-buy. While certain elements between the two are common, most notably the shifts in narrative chronology and use of flashbacks, they are very different in nature. SG was an uncompromising and objective portrayal of a person once considered a rebel hero and later a terrorist, based on his affiliations. It was shot in a quasi-documentary gritty B&W (albeit with stylish compositions akin to film noir) - as I recall now Rosi also made the not as brilliant but still interesting political thriller Hands over the City (HotC).

3B is a more intimate and nostalgic film. At the start of the film the titular brothers are informed by their father of their mother's death and come down to attend the funeral. The eldest Rafaelle (stably married) is a judge working high-level cases where he receives death threats, middle brother Rocco (a bachelor) works for an orphanage / correction home while the youngest Nicola (separated, with a little girl) is a rebellious blue-collar worker that is willing to retaliate hard against oppressive management. Once the brothers meet at their family home in the village, the film looks at the differences in their position and personal outlook, while also chewing over how distanced they are from each other and their old-world father who has little to live for after his wife's demise. In pivotal scenes the brothers argue and counter each others' position. Rosi's social concerns show but not in the direct and angry manner seen in SG or HotC. A good part of the film has a resigned and languid atmosphere, and the rhythm of village life - the dreamy sun-kissed country vistas (DoP Pasqualino De Santis) convey a lot of that. Piero Piccioni's score is IMO overwhelming and melodramatic, with explicit spoon-feeding about the tone of a scene.

Arrow's blu-ray gives a handsome job of the film. I thought the video presentation looked very healthy. The mono audio track is good, albeit with the caveats of post-dubbing, a common practice in Italian movies, especially those having multi-national casts (in this case French actors Charles Vanel and Philippe Noiret). Haven't yet gone through the extras, but there's an hour-plus audio interview with Rosi (and my copy came with a booklet, yay).
Posted by Suresh S No comments: 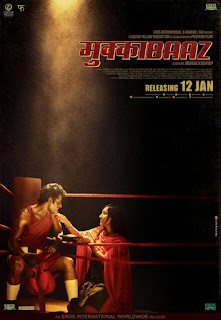 From an auteurist point of view Mukkabaaz represents one of Anurag Kashyap's biggest compromises to the mainstream Bollywood formula. Far from the audacious ideas of No Smoking and Dev.D and even the sprawling excess of the overrated Gangs of Wasseypur, this film sits so firmly in the masala entertainer mold his Dabangg brother Abhinav may well feel threatened for his livelihood (or whatever remains of it after the loud and offensively stinky fart called Besharam). But you know what, that's not necessarily a bad thing, because while AK here chooses to work within the limitations of the 'safe' formula, he gives it a welcome texture and relatable context that has been missing from traditional big-budget Hindi cinema, which usually takes place in an isolated fantasy land where none of the real-world issues we see occur.

The story of the underdog boxer / sportsman making his way to the top (and sometimes falling off it) is an old one in movie history, but 1976's Rocky landed the big punch in Bollywood, which briefly added pugilism to its existing potboiler template to churn out Main Intaquam Loonga (1982) and Boxer (1983). Boxing made another entry in 2014's rah-rah biopic of Mary Kom. While Kashyap's movie features boxing, a good deal of it, it is not a sports film or a biopic. Mukkabaaz's outline fits the typical Hero-Heroine-Villain-Supporting Cast framework of Hindi 'Phillum': Shravan Kumar (even the names of the characters are almost deliberately bog standard) is in love with Sunaina but falls foul of her autocratic uncle Bhagwan Das who goes on to lay obstacles galore and make life hell for the young couple and everyone around. Romance, Action, Dialogue-baazi, Music, The Works. Boxing is simply the medium by which the heroic underdog rises against his oppressors, whether literally in the film's several punch-up sequences in and out of the ring, or in terms of the prestige the sport gives him.

But Shravan Kumar is not just an upstart boxer hero, he's a Rajput with the audacity to desire a higher-in-the-hierarchy Brahmin girl. Uncle Bhagwan Das is a casteist Hindutva torchbearer that gets his goons to conduct "beef lynchings". Sunaina is a mute, but that doesn't make her silent - she is educated and feisty, and wants to make her 'bindaas' way in the world. She has no feeling of cringing gratitude for the man who "accepted" her. And Kashyap's film is not just about boy bagging girl. We also see Shravan struggling between the demands of job and sporting career. In the "railway job" he bags through sports quota he is made a dogsbody by his sarkari babu superior (a coach even laments that most youth that take up sport only do it for the quota). Early on in the film a boxing tournament is conducted on a makeshift stage because the sports venue has been usurped for some minister's family wedding. Even the climactic national championships are staged in a realistically modest stadium, with few audience members apart from the fighters and the coterie that arbitrarily decides their futures.

It also helps that while there is simplification, there is no condescension towards the film's mainstream sensibilities. The actors are sincere, with Vineet Kumar Singh utterly believable on-screen as the titular boxer and terrific chemistry from Zoya Hussain as the girl that drives him to win her. Other characters are solid if stock (I regret an actor of Jimmy Shergill's caliber reduced to playing a single-note blackguard like Bhagwan Das but he is game, while Ravi Kishan provides able support as the dignified Harijan coach who trains Shravan Kumar to go up against his opponents). The film is shot with an emphasis on naturalistic atmosphere; special mention goes to the boxing ring bouts which carry a ring of authenticity, and even the standard lone-hero-against-horde-of-henchmen battles eschew the cliches of slow-motion or wire-work.

I do hope that Kashyap's commercial picture gets at least a fair proportion of the box-office success that mainstream Bollywood movies get, so that a) more people in the mainstream industry are inspired to inject social observation into the fabric of their scripts without the need for specific message movies b) he gets the financial freedom to come up with more 'out-there' ideas for his subsequent projects.
Posted by Suresh S No comments: 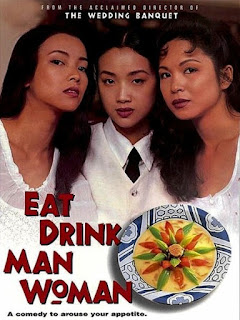 Eat Drink man Woman's (EDMW) title comes from a line in the film, "Eat, drink, man, woman. Basic human desires. Can't avoid them." If Yasujiro Ozu were to make a food-focused film it would come rather close. Of course this isn't Ozu but Taiwanese film-maker Ang Lee, one of the most interesting movie directors today for the sheer range of films that he has made, from intimate relationship dramas / dramedies to large scale spectacles, and sometimes interesting mixtures of the two. EDMW comes from Ang Lee's luminous 90's phase, shortly before he made the jump to Hollywood where he put out Sense & Sensibility and The Ice Storm, proving his masterly grasp of varied cultural sensibilities (and perhaps the universality of human emotion).
At its core EDMW (notably Ang Lee's only film actually set in Taiwan) is a relationship drama with the aging widower Mr. Chu and his three daughters Jen, Chien and Ning. Mr. Chu is the archetype patriarch, benevolent but domineering. The girls in one way or another feel constricted by the atmosphere at home. The eldest Jen is shaping up to be the unwilling spinster saddled with the looking after of the old man, Chien - the openly defiant one - looks for escape in apartment purchases and transfer promotions, while young Ning is making her way through college and the tricky path of relationships. This simmering pot of familial tensions is exemplified in the Sunday dinner, which also brings in the film's food connection. You see, Mr. Chu is a respected and passionate chef (even if the script signals his aging and dissatisfaction with life with a growing loss of taste senses) and the Sunday meal is a cornucopia of meticulously prepared and exquisitely crafted delicacies. It is a symbol of the bond between father and daughters even when the bond is so strained the girls consider sitting through the meal a torture ritual.
EDMW has the rhythm of a multi-threaded family soap in the hands of an intelligent and sensitive maker, with each strand given generous time to play out in full: Jen's quiet desperation for romance (or at least a form of escape from her colorless single status), Chien's resentment of Mr. Chu's controlling nature (it is suggested that her love of the culinary art was stifled by a father that pushed her out of the kitchen and into an admittedly successful corporate career), Ning a fast-food joint employee (What a slight for the epicurean Mr. Chu), tenuously building a relationship with her workmate's boyfriend. What of Mr. Chu himself? Alienated from his own daughters, Mr. Chu finds his outlet of paternal love in preparing elaborate lunchboxes for a young divorcee neighbor's schoolkid. There are other supporting characters each of whom in their own way stirs up the wok. With some mild surprises the film eventually brings each character's arc to a close and establishes a new balance of relationships and emotions for these people we have come to know and understand, leaving us satiated, like at the end of a multi-course family feast.
EDMW cannot be recommended as an incisive character study and is unabashedly sentimental, but only a joyless scrooge would deny its hot-soup-like heartwarming qualities, and in its detailed depictions of food preparation and presentation, it's a delight to behold (Vegetarians and people on a diet beware).