One of Our Aircraft is Missing [dirs. Powell and Pressburger] 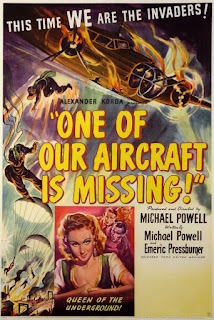 While not the first collaboration between the great team of Michael Powell and Emeric Pressburger, One of Our Aircraft is Missing (OOOAIM) was the first official production of their brainchild The Archers, in which they took a joint writer-producer-director credit. So it is an important element of film history. Lucky then it's an entertaining film too, especially interesting to fans of old-school war dramas (of course, OOOAIM wouldn't have been old-school but quite cutting edge in 1942 when it was released).

The film deals with a British bombing mission over Stuttgart that goes awry when the plane is hit by retaliatory fire and the 6-man crew are forced to bail out in their parachutes. They drift into a neighboring region of The Netherlands. The danger is far from over because this is still Nazi-occupied territory. They must rely on the patriotism of the native Dutch people and their resentment of the Nazi invaders to reach back home. The rest of the film is an episodic narrative where they are passed from one group of locals to another, all coming together to aid the Brits who they hope will ultimately help in eliminating the Nazi tyranny. It is a little piecemeal but the brisk pacing does not leave much time to reflect.

The focus of the screenplay is less on military heroics and more on solidarity between people against Nazi oppression, and cooperation for a common cause. Although OOOAIM primarily deals with the all-male British bomber crew, Michael Powell influenced Pressburger to write strong female parts, and so among the Dutch locals they meet some fierce women who are instrumental in arranging for the help they need; my favorite was Googie Withers' portrayal of the no-nonsense Joe de Vries who fools the Nazis into believing that she is friendly to them, all the while sheltering and aiding stranded allied forces. Powell's. autobiography claims that Googie, who had Dutch roots, was so overcome at being offered the part she broke down.

Technically too, the film is a marvel. Apart from exciting footage of actual planes obtained with help from the British armed forces, art director David Rawnsley designed massive floor-spanning miniatures of the Stuttgart landscape to depict the bombing run. Ronald Neame's cinematography is evocative and the film is skillfully edited by a young David Lean (just prior to his directorial debut with In Which We Serve). Powell also decided to avoid any background score and employ only digetic music, which generated a more realistic tone, while also highlighting the emotion when specific music cues like the Dutch national anthem were used. OOOAIM is old-fashioned in terms of its portrayal of war where soldiers could still be shown to be chivalrous and fair-minded, but it does not appear creaky.

A dedication at the start of Thupparivaalan salutes Arthur Conan Doyle, Sherlock Holmes and 'the mercurial' Jeremy Brett. But the detective hero of Mysskin's movie owes more to the rude arsehole of the Robert Downey Jr. interpretation. 'Action' star Vishal is Kaniyan Poongundran, the archaically named moody sleuth that 'rebels at stagnation' (in the hero introduction scene he stomps all over his book-lined apartment, petulantly demanding to be given a challenging case). He behaves like a  perfect tyrant with almost everyone, but most notably his 'Watson' Manohar (Prasanna) who seems a loser with no life of his own.

Kaniyan takes up the case of a schoolboy whose family dog was murdered, but the matter quickly escalates to a more sinister degree, involving a gang of assassins-for-hire (including a near-unrecognizable Bhagyaraj) who come up with some truly outre ways of carrying out their hits. The plot is all over the place, but Mysskin's writing delivers some ingenious fun moments, like when the killers carry out a Rube Goldberg scheme of offing a target with the help of nitrous oxide aka laughing gas - this would not be out of place in a Denny O' Neil - Dick Giordano 70's era Batman comic (for some reason, all mentions of nitrous oxide are bleeped out in the soundtrack, as though they were threatened with legal action by the gas manufacturers). Kaniyan's incongruous golf cap and ascot - standing in, one supposes, for Holmes' deerstalker and pipe - and the throwaway references to Tamil pulp fiction detective Sankarlal and Stanley Kubrick raise chuckles as well.

Thupparivaalan becomes less interesting in the bigger picture. The villains bandy a generic ruthlessness (the leader takes a coffee break in the middle of chainsawing a corpse, whoop-de-whoop), the 'HERO' action scenes and location hopping chases lose the idiosyncratic touch (although one of them ends in a memorably crazy Seppuku sequence). Also, Kaniyan's treatment of the token romance (a simpering Anu Emmanuel) is risible. But even while commercial, this film has more of the Mysskin personality than his Mugamoodi and is a decent watch for fans.