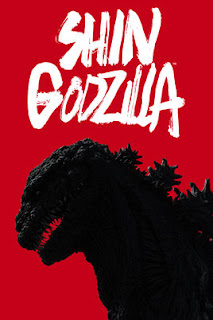 So the other day I saw Shin Godzilla aka Godzilla Resurgence, the 2016 Godzilla movie from Toho Studios. The film is directed by Hideaki Anno, primarily known for his work in animation films, and Shinji Higuchi (who appears to have been mainly responsible for the monster action sequences in the film).

For the benefit of novices to the Godzilla franchise, it all began when Ishiro Honda made Godzilla aka Gojira in 1954. That seminal tale of humanity terrorized by a gargantuan beast created from atomic radiation was influenced by the tragedy of the Hiroshima-Nagasaki bombings, a parable for the immense destructive potential of atomic power. The picture struck a major chord with Japanese audiences and birthed a timeless franchise. With further installments however, the socio-political angles were diluted or altogether discarded, the films concentrated on providing simple popcorn entertainment with tag team wrestling bouts between various giant monsters, and humans generally restricted to the sidelines. Godzilla itself was represented alternatively as a menace or as a protector from other monsters.

Anno's screenplay for his Godzilla version has significant deviations from the bulk of the Toho franchise. The film is a reboot that ignores the existence of every previous Godzilla entry, including the '54. Godzilla is not immediately seen in its iconic avatar, going instead through multiple metamorphoses from a straggling bug-eyed amphibian with gills to the more familiar reptilian form, increasing in size and power with each transformation. The human characters also have a far greater presence. Anno seems to tap into the Fukushima disaster, and specifically the response of the Japanese government in terms of providing information and taking action in the wake of the catastrophe. We are subjected to large chunks of scenes showing politicians and government officials jabber endlessly, trying to classify the situation and what category of action needs to be taken, and the tedious red-tape culture that seeks proper chain of command approval for each step taken.

While the critique is appreciated, it is repetitively hammered in a manner not always advantageous to Shin Godzilla's dramatic value. Unlike the first Godzilla film's passionate researcher Dr. Yamane or the romantic underdog Dr. Serizawa, none of the human characters are interesting in themselves, and unless you understand Japanese or are watching a dubbed version, the film is in large part reduced to keeping up with rapidly changing blocks of subtitles for expository dialog / information dumps. Monster action, when it happens is good though, a couple of instances aside, not more impressive than what we've seen in Shusuke Kaneko's kaiju movies (his Gamera series, and GMKG: Giant Monsters All-Out Attack), but it is better than the incomprehensibly edited recent Hollywood film King of the Monsters. One impressive aspect of the presentation is how much more powerful Godzilla is. He seems nigh invulnerable to most weaponry, not even batting a (heh) figurative eyelid, while the atomic breath's range and destructive power is off the charts. Defeating Godzilla seems almost impossible, providing a far bleaker view of the people's impending fate.
Posted by Suresh S No comments: