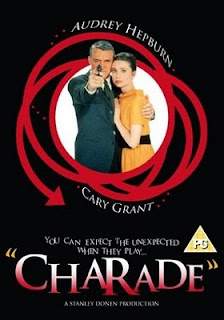 Charade with Audrey Hepburn and Cary Grant is a lot like its name suggests, not a “born” film but one crafted by miming elements and references from other films. In this case that's not a bad thing at all, because the whole package is devised and presented with such cleverness, good cheer and sparkle it goes down like an exceedingly smooth fruity liquor.

The plot is all manner of silly stuff, a collage of elements mainly from Alfred Hitchcock's Cary Grant films (North by Northwest, To Catch a Thief). Hepburn with her dazzling good looks and sophisticate aura plays a recent widow whose husband is killed in mysterious circumstances and who may have hidden a large cache of stolen wealth. Unfortunately for her some very unpleasant characters who knew her husband believe that she holds the secret to the missing hoard and will stop at little to get it. In steps Cary Grant as her knight in shining armor...or is he? The film's fun comes out of Audrey encountering a plethora of event twists and hidden identities until the poor girl no longer knows what she can believe. It's all in good fun because Charade is really built upon the chemistry between Hepburn and Grant. Of course, even with the script's knowing winks at their remarkable age difference it's a little creepy to see pretty Audrey throw herself upon a distinctly avuncular character. Still charm is both actors' strong point and Charade works beautifully in the scenes of their cheerfully saucy verbal tango. Grant especially is unparalleled at straight-faced comedy. When asked by Audrey if her late husband's tooth-powder tin could contain the stolen money as heroin, Grant takes a whiff and with a look of priceless solemnity exclaims, “Heroin! Peppermint-flavored heroin!”

Which is not to say the other characters are dull. Why no, you have some wonderful support from stars like Walter Mathau, James Coburn and Richard Kennedy (Naked Gun); all of them look like they were having a good time. Apart from romancing his lovely co-star, Cary Grant also gets a little action, and a scene where his character leaves an assailant dangling from a roof with an “American Express” neon sign and then tells Audrey he left the fellow “hanging around the American Express building” recall to mind him being Ian Fleming's first choice to play James Bond.

Charade's not a note-perfect Hitchcock-Grant pastiche. It sometimes tries a little too hard for laughs; The scene of Cary Grant bathing with his suit on is wholly unfunny and embarrassing (admittedly, less embarrassing and horrifying than the prospect of seeing him bathe without the suit). For a film so light-hearted in tone, the murder tableaux are more explicit than Hitch would have gone for: one character has his throat slashed while another is found asphyxiated with a plastic bag. Gruesome.

The other Stanley Donen film I saw and really liked was Two for The Road, featuring Audrey Hepburn again, this time in a tugging bittersweet romance with the brilliant Albert Finney. Now that was a “born” movie.
Posted by Suresh S No comments: 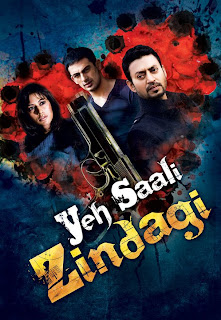 It is a little surprising that Yeh Saali Zindagi comes from the veteran directorial chair of Sudhir Mishra, because it's more like a talented debut venture, good-intentioned, enthusiastic and sparkling fresh in its best parts but also saddled with a lack of discretion and sloppy meandering that could, if avoided, have made for a better film.

You have to of course give kudos to a script whose central romance kicks off with a scam where the wheeler-dealer protagonist (Irfan Khan) protects the woman he is attracted to (Chitrangda Singh) from financial ruin and arrest by coaxing her to get the thumb impression of her dead brother lying in his coffin. Sadly for Irfan (whose noir-inspired voiceover introduces the various plot threads) it's a one-sided romance since his lady love is unaware of his feelings and happily flirts with another man. Her affair with an industrialist's son runs aground when her lover and she are kidnapped by a band of thugs as hostages. The thugs are headed by confident debutant Arunoday Singh who needs them to obtain the release of a big-shot gangster (Yashpal Sharma) from Tihar jail. Chitrangda is sent off by the thugs to obtain the terms for her boyfriend's release. Irfan's infatuation for her gets him involved in the messy proceedings joined by a huge cast of peripheral characters.

The bulk of the film is a black comedy with a lot of convoluted situations, deus ex machinas and double and triple crosses. Manu Rishi who did a great job with the writing of Oye Lucky, Lucky Oye once more shows a fine ear for funny lines (with a lot of cussing, mind). Add to this a stylized narration with flashbacks and rapid-fire shifting between characters, locations and perspectives, and you have a concoction that in its best moments is hilarious and charming. The leads show palpable enthusiasm for their roles and it was also great to see other contemporary actors I admire (Sushant Singh, Yashpal Sharma) getting meaty parts where their talent is showcased.

But I also thought that YSL suffered from having too many plot threads clamoring for attention. Some, like Arunoday's pursuit of a wife sick of his criminal ways, bear little relation to the central narrative and could have been easily excised out. Some of the characters, like the big-shot gangster's fashionista brother (Prashant Narayanan), had a very slapped-together quality to them. Most of the film is shot in and around Delhi giving a good sense of location, and the sudden jump to Mumbai for the climax is a jarring note (although more than matched in absurdity by the unnecessary and bone-headed action maneuver pulled by Irfan's character in the climax). While the end product was still likeable overall, these flabby elements detracted sufficiently from the experience for me to not be unqualifiedly enthusiastic about my viewing, and I doubt I'll be looking forward to revisit.
Posted by Suresh S 1 comment:

I am a happy camper...again

Recent hauls made (my very diminutive movie haul on the left against Ravi's massive haul of CD's and books on the right): 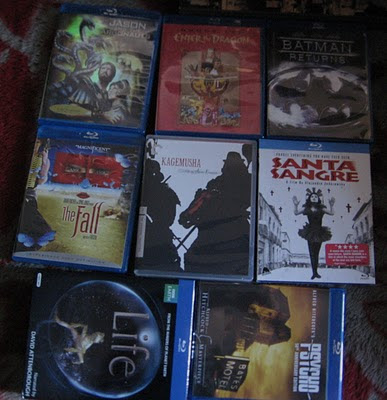 Yea, all blu-ray this time, it wouldn't pay for me to get good looking movies in non-HD format any more. Watched Santa Sangre today afternoon, which was a gorgeous experience, both visually as well as for Simon Boswell's amazing score. Also heard a fair amount of Peter Jackson's enthusiastic and knowing commentary on Ray Harryhausen's Jason & The Argonauts. I'm a gonna savor all of this stuff.
Posted by Suresh S No comments:

Interview with The Vampire [Neil Jordan] 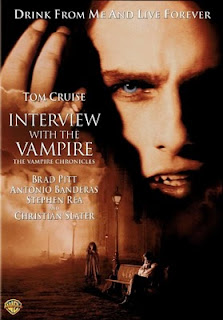 I liked the film of Interview with The Vampire when I saw it eons* ago, but sometime after that I picked up Anne Rice's source novel, which turned out so crappy I dropped it less than a third into. So when I saw the DVD at a friend's place I borrowed it with the intention of checking out if my initial impressions were all too hasty. As it turns out, no. Interview... in its film adaptation is a worthy addition to the vampire cinema chronicles.

The screenplay (Rice herself) is skilfully pared down and keeps the events of the story moving at a sharp clip. For whatever reason, the flagrant homoerotic elements of the novel are implied, but with a restraint that keeps the film from veering entirely into soggy romance territory. The lead performances are sufficiently charismatic to keep the proceedings interesting: Tom Cruise in particular gives his character Lestat a flamboyance that works brilliantly in context, creating one of horror cinema's more enduring monsters. However the real star is director Neil Jordan himself who cocoons the proceedings with a superbly evocative Gothic atmosphere. The look of the film, with its frequent use of candle-lit stages, period furnishings and rich tailoring is like “Merchant-Ivory meets Hammer Studios”, if more grandiose, thanks to a significantly fatter production budget, than either of those chaps could hope for. In fact, the characters' jumping ship mid-way to Europe was a bit disappointing since they'd done such a fine job of showcasing the look of 19th century America (oh well, at least they didn't go to Transylvania to “naaver dreenk vine”). Elliot Goldenthal's moody score with its heavy Jerry Goldsmith vibe is also a big hit with me.

Interview... loses its way in the parts where Lestat is off-screen (and the revenge exacted by Brad Pitt's character on the Parisian vampires comes off ridiculously easy), but it's still recommended as a sufficiently entertaining, sumptuous looking and “not afraid to bare its fangs” vampire film.

* In an age when people actually thought Guns n' Roses was a big deal and bought this film's orchestra-heavy soundtrack album just to hear their cover of The Rolling Stones' Sympathy for The Devil.
Posted by Suresh S 1 comment: