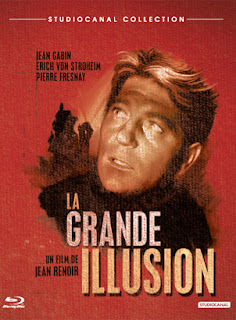 Last night I saw La Grande Illusion. This is a 1937 movie about French soldiers captured by the Germans during WW1. There are several occasions in which the French soldiers try to escape their prisons, the ideas for which were later taken for several "escape" films. But this is not purely an escape movie. The film casts an observant eye on the class differences between the soldiers (especially between the noble-born officers and working-class soldiers) and how these differences are to them greater than the differences in nationality or religion. The movie does not explicitly show the cruelties of war, and the interaction between the prisoners and their German soldiers is generally of a chummy nature or at least showing mutual respect (most striking here is the cameraderie between Pierre Fresnay as the highborn French officer de Boeldieu and Erich Von Stronheim as the aristocratic German captain von Rauffenstein). Rather, it depicts the futility of war by showing how the people involved in fighting these wars do not have any inherent hatred or ill feeling towards each other, and it is the arbitrariness of those in power that pulls them into conflict. While La Grande Illusion is on the sentimental side, it is not preachy. There is a cautiously optimistic message that at the end of the war, people will once again learn to live with each other. Of course, this hope was undone 4 years after the film was released with the advent of WW2.
La Grande Illusion was banned in Germany and Italy (of course), but was a major success wherever else it was released. Audiences identified with the essential decency of the characters and the anti-war sentiment. A cross-border love story that blossoms towards the end of the film is especially poignant. I would really like to see India make a war-time film like this instead of just the ones that go rah rah patriotism.

Studio Canal's blu-ray of La Grande Illusion features an impeccable presentation. Unlike the previous Criterion DVD release which from screenshots now appears digitally sharpened and cropped on all sides, this BD uses a newer 4K restoration sourced from the nitrate negative and the image is simply stunning. Terrific depth, deep (but not boosted) blacks and such minimal grain that one could almost suspect noise reduction if not for the terrific detail. There are occasionally soft scenes but none that seem a by-product of digital manipulation. The French audio track (DTS-HD MA 2.0) is clear and does the job, though as expected for a movie of this vintage, not especially immersive and the highs in the background score jar a teensy weensy bit for me. There's a boat load of extras which promise to be interesting, but I have not seen any other than the (very nice) lengthy video introduction/essay by French movie critic Ginette Vincendeau (who seems to be the go-to person for video essays on Arrow and Studio Canal releases of French movies).
Posted by Suresh S No comments:

Gattu and The Searchers 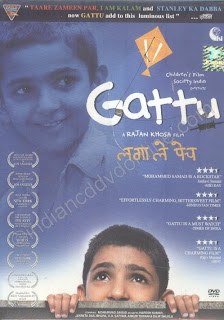 Children in India do not have a whole lot of home-grown entertainment specifically catering to them. Most mainstream Indian movies come under the very dubious category of "family film", which essentially means that they are a schizophrenic mash-up of conflicting ingredients. where rudimentary stories and banana peel humor sidle up with crude sexual overtones and/or stomach-turning violence. As a result, z-grade animation flicks like Bal Hanuman and gratingly precocious garbage like Chillar Party are what we have in the name of children's films. It is embarrassing that a miniscule percentage of an already low number of films produced by the Children's Film Society of India (CFSI), get any theatrical or home video release, although to be frank the few I have seen are such amateurish efforts there is little pride to be gained from their exhibition. But occasionally there is a whiff of freshness on the horizon. Gattu is one such example; here talented film-maker Rajan Khosa (Dance of The Wind) takes a simple story and mounts with enough sensibility to keep it interesting for both kids and adults.
The titular character is a street-smart orphan that works in his uncle's small-time recycling factory and is passionate about flying kites. The target for this spunky sport (and many like kids in the neighborhood) is Kali, a black kite that has gained notoriety as an undisputed victor of kite duels. The film is about Gattu's various little schemes to procure the means for his sport, including posing as a student to get access to the school roof from where to fly his kite. The 74-min running time makes for a breezy experience, the locations and characters mostly ring true, and the film thankfully does not preach or talk down to its younger viewers. Mohammad Samad as Gattu displays a natural non-cloying charm, and ably carries the film on his tender shoulders. Also, there are no annoying songs to slow the pace. In all, Gattu is a worthwhile watch especially for parents looking for sensible entertainment they can share with their kids.
Eagle Entertainment has put out a decent DVD with an anamorphic transfer of the film and short but insightful featurettes into the vision behind the film. it can be purchased online HERE. 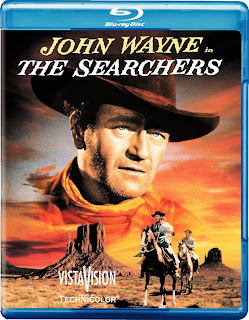 The Searchers is a good movie, no doubt. It's a tale of revenge where white man Ethan (John Wayne) goes up against a marauding Indian tribe that attacked his brother's family and carried off their young daughter. In the story we see how the thirst for revenge brings to the fore Ethan's innate prejudices and makes him at various moments as savage as his enemies. This is accomplished decently, but I think there was a conscious attempt to not strike such strong notes here as to significantly diminish the heroic archetype. I was more affected by his performance in Red River. Some of the film's humor, especially its caricature depictions of supporting characters, sits uneasily alongside its grimmer aspects.
What struck me most about the film was its use of the widescreen process (referred to as VistaVision). Unlike most films where the widecsreen is used to expand the canvas horizontally, the attempt here seems to be to pull the camera back with the intention of showing more vertical space, especially above the characters' heads; one sees a lot of this in the outdoor shoots in the ever-popular Monument Valley). The intended aim appears to be to show how the rocky landscape towers over the characters. While Man aims to carve civilization out of his surroundings, he is dwarfed by the sheer force of unforgiving nature around him and must constantly resist the impulse to be more than savage brute.
Warner's blu-ray for the film gives an excellent presentation with a panoramic 16:9 transfer that is stunningly detailed, and the original mono track (albeit only in lossy form, but it's clear enough, although it may lack the oomph of more elaborate mixes).
Posted by Suresh S No comments: