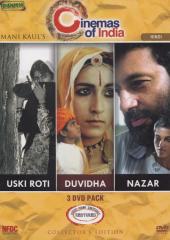 I suppose by now most people that know me well know of my love-hate (actually I wouldn't say love) relationship with most of the late Mani Kaul's films. The man had some chops – his themes were not conventional, he had an eye for lighting and shot composition, and he could use music in a very evocative way. But he was a twat, too full of his own artistic importance and what an antithesis he was going to be to traditional narrative-oriented Indian cinema – one of the joys of reading Satyajit Ray's essay collection Our Films, Their Films was his contemptuous dismissal of Kaul's film-making style as “anemic”.
Most of the Mani Kaul films I saw were on the Doordarshan channel (yes, yes, in those old days when TV wasn't all Sari and Sins). Luckily enough the first one I caught was Nazar, which I remember being fairly intrigued by (especially Piyush Shah's images set to classical music) even though it wasn't breezy viewing. I will be revisiting it soon to see how my interest holds up. Later on, I slogged through Uski Roti (not even sure now if I saw it in full, because I was plain zombified by the experience) and Duvidha (more on this ahead). I was also “privileged” to see Beyond The Cloud Door, his "masterful" contribution to the shorts compilation Erotic Tales, at Mumbai's New Excelsior cinema. Despite Anu Agarwal's Tittu Ahluwalia act, most of the crowd gathered there was swearing at the dullness and incomprehensibility of the proceedings and I could not blame them. Sadly, I haven't seen any of his documentaries, I suspect the form is a lot more suited to his style.
Anyway, back to Duvidha, which I saw today on the NFDC Mani Kaul 3-movie set. In my first viewing on DD, I thought the film was an interesting ghost story done in a terribly dull manner. Consider the plot: When a young man leaves his wife on business immediately after the wedding ceremony for an interval of several years, a yaksha impersonates him and consorts with the wife (after telling her the truth). What happens when the young man returns? Who is her real husband? Very interesting folk tale with a powerful and timeless moral dilemma, like a Girish Karnad play. But dash it if Kaul doesn't aim to deliberately undermine the dramatic potential with his confirmed anemic approach. In Kaul's version, the characters are reduced to ciphers, their ethical dilemmas mere murmurs. It's not even in the name of realism, I've seen real people immensely more animated and emotional than the actors in this film. It's in my view a fake aesthetic designed to appeal to people that believe in the snob value of such esoteric examples of artistic expression.
That said, my second viewing was a better experience, mainly because of the better conditions of the viewing. Thanks to the clean-up job done by NFDC on this release, the mumble-mumble of the soundtrack is a lot more comprehensible and the sound design can be appreciated. It doesn't change my impressions of the film a huge deal but I am less bitter about it now. I suppose the image is better than what it used to be: It's still very soft and like with the Mirch Masala release, there's a problem with blown whites. You might find that you need to dial the brightness of your screen a few notches below usual to make the display easier on your eye and better appreciate the shadowy compositions.
I'll probably update this post with more impressions as and when I watch the other films in the set.
Posted by Suresh S