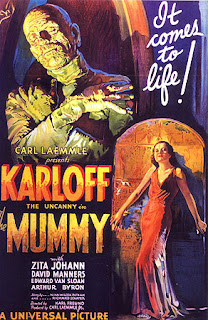 After the smashing success of their Dracula and Frankenstein adaptations, Universal Studios was on the lookout for more monster stories to make (ha) monster hits of. Combining bits of sensational history and pulpy fiction, they came up with the story of a revived Egyptian mummy running (ok, shambling) amok in a contemporary age. The titular mummy is played by Boris Karloff, freshly propelled to stardom with Frankenstein and proudly labeled on the poster as Karloff The Uncanny (which must have been a change from being represented by a "?" in Frankenstein's opening credits). The film was directed by Karl Freund, who performed camera duties on Universal's Dracula and had previously worked with the greats of early German cinema like FW Murnau and Fritz Lang. Having Freund in the directorial chair gives the film a dramatic and atmospheric look with elements of Expressionism - the opening scene in the crypt where the archeologists chat about their sensational new find while a bandaged Karloff ominously stands in a half-open tomb in the background has a marvelous shadowy ambiance that immediately conveys a delicious shiver to the viewer.
The 1932 film shares a kinship of plot elements with Tod Browning's version of Dracula - the title character is an undead/revived creature looking to seduce/corrupt an individual betrothed to a conventional romance, and has a nemesis sufficiently well-versed in the folklore to fight and destroy it. The fact that in both cases the same actors play the respective roles of the nemesis (Edward Van Sloan as Dr. Van Helsing in Dracula and Dr. Muller in The Mummy) and the romantic hero (David Manners as Jonathan Harker in Dracula and Frank Whemple in The Mummy) only adds to the similarity. The main difference is in the element of sensuality - while Dracula had Lugosi primarily in a predatory role (even the women in the film find his stilted suavity giggle-worthy), the script for The Mummy and Karloff's approach to his character Imhotep give it greater depth and sophistication. Dracula is interested in the blandly virginal Mina as only another blood bank with a pretty face, but Imhotep is stalking and seducing Helen because she is a reincarnation of his beloved Anck-es-en-Amon. Zita Johann's interpretation of Helen / Anck-es-en-Amon fully supports the ambiguity and sensuousness of the premise and her scenes with Karloff crackle with a forbidden erotic energy that never dips into cloying sappiness. In comparison, Helen's attraction to Frank Whemple comes off as trivial and disposable.
The 1932 Mummy is not a film of set-pieces and big action moments, nor of convoluted plot machinations. What it is is a deeply atmospheric experience. Karloff wears the iconic bandaged get-up (brilliantly conceived and executed by Universal's "go to" monster make-up man Jack Pierce) only in  the opening reels, but his brooding eyes (aided by some tricks of make-up and lighting) he consistently convey an existence spanning thousands of years. Hammer's film and Universal's own reboot eschew the layering and ambiguity of the title character in favor of adrenaline-pumping. But about that, later. Freund-Karloff's film remains a landmark creature feature that does full justice to its creature.