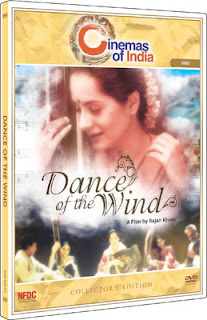 Saw the film last night, and while it's not an amazing or revelatory movie, it's decent with a thankfully brief running time of 86 min. Kitu Gidwani (This woman is ageless. I remember seeing her as a kid in this DD serial called Air Hostess and later in some detective serial with Mazhar Khan, and had a childhood crush on her. She looks good even in this '97 movie and in some more recent stuff) plays a singer that loses her voice after her Guru-mother Karuna Devi (Kapila Vatsyayan, very solid cameo performance) passes away, and this is a metaphor for how she has not developed her own style and feel for the art. The film is about how she goes after this quasi-mystical little girl Tara who represents the unfettered original spirit that she is looking for to regain her confidence after her mother's demise. Pleasant in a vaguely arty way. Kitu is not a gifted actor but she is involved in the role here, and does a good job in depicting the emotional vacuum in her character after her Guru-ma's death. She's never hugely convincing in the singing bits though, more Bharat Bhushan like.

Piyush Shah's cinematography is in the style he used for Mani Kaul's films, and makes for some pleasant and soothing visuals. The score by Shubha Mudgal is pretty interesting - for one she does not herself sing (Shweta Zaveri for Pallavi, Shanti Hiranand for Karuna Devi and Brinda Choudhari for Tara are the major vocal artists), and secondly the focus is less on elaborate hi-falutin' performance music and more on unaccompanied melodies and songs. There is one song that gets repeated as a thematic element in the film and it has a lovely luster to it, worth hearing several times over.
Youtube song link
Posted by Suresh S