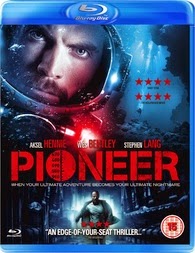 Last night I saw Pioneer on the Arrow Films blu-ray. The protagonist of the film, Petter (Aksel Hennie, who would never be given a lead role in a Hollywood film), is Norway's star diver in a joint test mission with an American group to install an oil pipeline at the bottom of the sea for offshore drilling. During the course, a freak accident occurs, which leads to the death of Petter's brother, also a diver on the mission. Fighting guilt over possible responsibility in his brother's death, Petter investigates the matter (and this is where the casting is brilliant, because the actor doesn't have the star charisma that make audiences automatically root for him - in fact early on one thinks he may be looking for someone to blame to assuage his own guilt). But he finds a lot of doors being closed in his face, and even some attempts on his life. The challenges he faces in trying to ascertain the cause of the accident form the major crux of the film. As the story deals with a Nordic-American collaboration, the film has a mix of Norwegian and American actors, and Avatar's beloved evil colonel Stephen Lang plays a pivotal role.

Pioneer is not exceptional as a suspense/noir, but remains fairly solid with some (heh) immersive moments in its diving sequences. The pacing is mostly measured and low-key, as are the performances. The underwater scenes are excellently shot and there is a lovely moody electronic score from the French duo Air.