So last evening I headed to the Tata Theater at Nariman Point for an event billed as "a dramatic reading" headlined by Pankaj Kapur. Most of us 80's kids first knew of Mr. Kapur through the Doordarshan TV series Karamchand, in which he played the eponymous carrot-munching (and on occasion cigarette-smoking) detective, tailed by goofy secretary Kitty (Sushmita Mukherjee). Directed by Punkuj Parasher (oh, how the mighty have fallen) the series thrashed everything around it for pace and slickness, and was an instant hit. So of course one looked around for other things the actor had done. By happy coincidence this led to an exploration of non-mainstream cinema, for Mr. Kapur, like his National School of Drama predecessors Naseeruddin Shah and Om Puri, was a rising star of this scene. I have a faded memory trying to sit through Sudhir Mishra's 1987 political drama Yeh Woh Manzil To Nahin, simply because the cast had both Karamchand and Kitty. The 80's were Pankaj Kapur's golden era, with a string of memorable appearances in Mandi, Jalwa, Khamosh, Chameli ki Shaadi, Raakh, the 12 Angry Men ripoff Ek Ruka Hua Faisla, culminating in his justly celebrated portrayal of the frustrated researcher Dipankar De in Ek Doctor ki Maut. The decline of the parallel film scene post that era meant that Pankaj Kapur had fewer opportunities to display his histrionics at the cinema. Being better known then on for television work in Zabaan Sambhal Ke and Office Office, he nevertheless registered his presence in such parts as the terrorist Liaqat from Roja, the Don Corelone-sque Duncan character in Maqbool...even in that ghastly misfire called Matru ki Bijli ka Mandola he was one of the saving graces. With his hypnotic gaze and gravelly voice, a wonderful capacity for brooding silence, explosive drama or pie-eyed comedy, Mr. Kapur has a staggering repertoire; and there may have been bad roles (Mohandas BALLB anyone?), but I do not recall any bad performances. 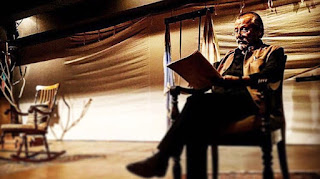 Dopehri, the theater listing informs, is a novella written by Mr. Kapur himself. The plot is a simple one, the sort that would feature in Readers' Digest or fill an episode of Katha Sagar. Elderly widow Amma Bi lives alone in her haveli, save for the servant Jumman. But even Jumman is not around all the time, and her loneliness grows ever more frightening. After some escapades, including a visit to an old age home, Amma Bi is persuaded by her well-wisher Dr. Saxena to take in a paying guest. How the guest's arrival changes Amma Bi's life, in the process giving her an identity and purpose in life, forms the crux of the story. It's a standard human interest story, but two things make the narrative come alive. The first is the language: Mr. Kapur's prose doesn't just read, it flows. On several occasions, you could hear the audience go "wah, wah" (respectfully) when they heard a particularly artful turn of phrase. Hindi has a uniquely apt flavor especially when used for satiric humor and Kapur fluidly molds the language to his bidding. The second is the performance: As a narrator and actor he is tremendous, able to convey much by glance, by inflection, by the rhythm of speech. And he has a love for his written world and characters that is contagious. Simply by modulating his voice and speech mannerisms, he "plays" all the characters: we see and hear them clearly, their amusing quirks and foibles brought to life in our heads. At numerous times, he has the theater rollicking with laughter, without ever cheapening the material or being untrue to his creations. By the end, we have been moved by these characters.

The production is also simple but effective: The sets are suggestive rather than elaborate, a tree with a broken kite, an armchair with a table holding a "paan" box, a writing desk. With the help of lighting changes to suggest time and mood, they are sufficient to convey the setting, and the actor expresses an ease that gives a wonderfully homely feeling, like a favorite uncle narrating a cherished family story. In all, a heart-warming experience in a time where we can always do with one.
Posted by Suresh S