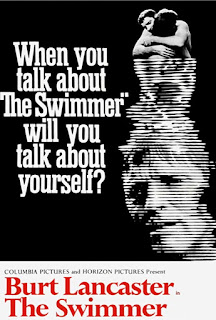 The late 60's and early 70's were a time many kinds of weird interesting anti-establishment movies could get made in the studio system, especially if you had a bit of star power in the cast or director's chair. For star power, one could hardly get better than Burt Lancaster. Although 50+ at the time of this film, Burt was in excellent physical form and his animal magnetism still a force to reckon with. Better still, he was an intensely intelligent actor (if also someone likely to impose his own ideas) and interested in the part.

Even though it stretches out (sometimes rather obviously) to feature length, The Swimmer clearly shows its roots in the (John Cheever) short story, beginning abruptly with Ned Merrill (Lancaster) walking out of the woods and diving into a neighbor's pool. In the conversation that follows we perceive Ned as someone admired and even envied by his jaded neighbors, a picture of health and success nurturing an ideal family, yet retaining a youth's sense of wonder and hunger for life. Plotting a course of private swimming pools that go all the way up to his home in the hills, Ned improviso decides to swim the whole route, which he fondly names the River Lucinda (after his wife).

The swimmer's journey begins pleasantly enough as he is hailed by amused neighbors. We see Ned as retaining the liberated romantic soul his friends have lost in time. Subtly the narrative shifts. When Ned meets a grown-up girl that was once babysitter to his children he invites her to share his journey, their playful interaction (including an indulgent steeple-jumping sequence) eventually leading to a darker space. In a telling bit of symbolism, Ned's first stumble from the wholesome American Dream image coincides with his spraining an ankle. Bit by bit, the cracks in his face of contentment appear. Some of the neighbors hate Ned, some view him with scorn. The man we once see racing alongside a horse gains a more pronounced limp. Scene by scene, pool by pool, our impressions of Ned as the figure of envy wear down, reducing him eventually to wretched pity. As Roger Ebert points out in his trenchant review, Burt Lancaster is the right actor for the part because he is the hero whose aura generates the tragedy in his fall.

The film's theme may be interpreted in different ways. It would appear that the neighbors farthest away from Ned's home (and assumedly the goings-on of his life) are the ones most invested in his charisma, and as he moves nearer, the uglier truth is revealed. It may also be seen as the externalization of a nervous breakdown: At the beginning of the film we are seeing Ned's own image of himself, and as time passes, the illusion strips away to horrifying realization of of his true pathetic self - Ned could well be the ghost that didn't know he was dead.

Apparently, Lancaster (passionate enough about the project to fund the last day's filming from his own pocket) and director Frank Perry had conflicting ideas during the shoot and the film certainly carries some of that turmoil (Sydney Pollack conducted an uncredited reshoot of a scene in which Frank meets a former flame). That's not bad in itself, because it is in some way a reflection of the torment growing in Ned's mind in the course of his aquatic odyssey. The film's lush style (both in its glamorous depiction of upper-class suburbia and in Marvin Hamlisch's baroque score) is a brilliant counter-point to its sordid undercurrent. For all its flaws and indulgences and backroom battles, The Swimmer is a grand Experiment (with a capital E) worked by passionate people and deserving of a larger appraisal.
Posted by Suresh S