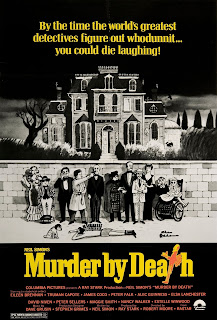 Written by Neil Simon (The Odd Couple, The Sunshine Boys), 1976's Murder by Death (MbD) is a spoof on classic archetype sleuth stories / films. The sleuths of MbD - barely veiled variations on the famous fictional detectives including Hercule Poirot, Miss Marple, Nick and Nora Charles (from The Thin Man series), Charlie Chan and Sam Spade - are "cordially invited to a dinner and a murder". They congregate at a remotely located mansion where they are greeted by a blind butler (There's a deaf-mute cook too, and as you may well guess, the combination makes for some peculiar circumstances). The major parts in this farce are played by a bevy of stars including Alec Guinness (irrepressible as the blind butler), David Niven, Maggie Smith, Peter Falk and, oh yes, Peter Sellers caricaturing to the hilt as the Charlie Chan character.

After assorted bits of comedy for the introduction and settling down of each sleuth party in their strange host's home they settle down to dinner, during which, in a nod to Agatha Christie's Ten Little Indians / And Then There Were None, the host makes his appearance in the flamboyant form of Truman Capote and challenges each of them with the prize of a million dollars to solve by dawn a murder that is to occur at midnight (and I'm not sure he didn't say In Cold Blood), while failure will mean the loss of their reputations.

MbD is a no-holds-barred farce on the stereotype rigmarole of the whodunit. It has interesting elements, like the culture clash between the genteel fastidious sort of detective Christie created and the hardboiled gumshoe dick. Some of the comedy like the scenes played between Guinness' sightless butler and the deaf-mute cook for the dinner party is priceless. But given the premise and the stellar cast I expected greater sparkle. Beyond the introduction of the different sleuths, there is not as much fun extracted from their interaction. And Sellers' Oriental detective is problematic. I wouldn't have minded the racial stereotype so much (apparently Sellers had deliberately heightened the caricature to draw attention to the silliness of white people playing non-white roles) if it was actually funny, but most of it is just awkward. And while one understands that the script aims to poke fun at the ludicrousness one comes across in the denouement of many suspense stories, MbD's climax feels cloyingly overdone. I was looking for a comfortably funny film spoofing my favorite genre, but this one with all its promise doesn't quite hit the mark.

For those interested in details of the blu-ray from Shout Factory:
The disc features a rather decent transfer although the image is not free of age-related damage, and the compression (especially in the scenes of fog) is a little suspect. The lossless mono audio is fine within limitations, with a nice boost to the music. Extras include an okey-dokey short interview with Neil Simon (in which he mostly seems to describe specific scenes of the film) an audio commentary by a Mr. Lee Gambin (who seems to refer to everybody as incredible and makes such wincing gaffes that I turned it off after a while).
Posted by Suresh S