Since none of the films at the cinema seemed particularly inviting (Made in China and Saand ki Aankh included, which from the trailers appeared banal and cliched, respectively), and mum unwilling to step out of the house during Diwali because "What if someone comes to visit us?", Movie with Mum this weekend was on DVD with the middle-of-the-road family drama Njandukalude Naattil Oridavela (NNO), roughly translated as "One Time in the Land of Crabs".

NNO centers around an archetype family whose equilibrium is disturbed when the mother (Shanthi Krishna) is diagnosed with breast cancer (hence the crab reference). The focus of the film is on the impact this has on mum and the other members - father (Lal), his dad, two daughters (one married with a good-natured but miserly man) and a son - how their lives and their way of seeing life is affected. Popular actor Nivin Pauly, who also produced the film, plays the son. When his mother first summons him urgently, he assumes it is to fix his marriage, he and his siblings learning the truth only after an extended session of hesitation on the parents' part.

NNO attempts a light-hearted matter-of-fact look at the situation, keeping melodrama to a minimum. There is also some mild element of back and forth in time, including a crucial moment at the end. To be frank I felt that the first half was a little dull, not humorous enough to be engaging, and the characters not particularly well-etched. But the film comes around a lot better in the second half. Unlike many mainstream movies where the cancer patient has a constant fake courage personality - I like most elements of Anand, but was irked by the title character for behaving like an asshole happily interfering in other people's lives as though having cancer gives him some divine right - we see the mother's moods changing from initially brave and carefree to sometimes scared and angry at how much her family has come to depend on her. 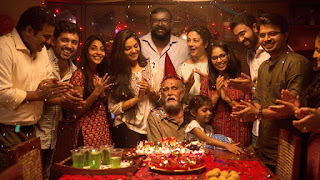 Kinship is also depicted in a pragmatic way - although they love her the kids get annoyed with how mum's illness cramps their lifestyle and burdens them with responsibilities unprepared for, and the father is unhelpfully anxious most of the time. NNO is still a Readers' Digest movie but executed with a restrained level of treacle. The only thread which seems a little tacked on is Pauly's romance with a girl who also visits the hospital for her father.

After watching the film as a whole, I liked NNO a good deal and may consider revisiting sometime. It is a nice companion to Piku and recommended for people that appreciate a humor-lined exploration of age / illness / mortality and its impact on the family.
Posted by Suresh S