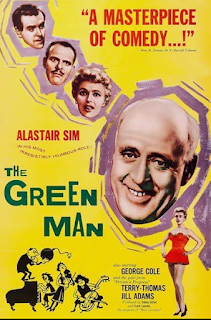 In a story that triggers brief memories of Ealing Studios' (ha!) killer comedy Kind Hearts and Coronets, The Green Man's protagonist (Alistair Sim) is an unprepossessing assassin who specializes in bomb hits. The story starts with our bomber giving a self-laudatory account of his career, leading up to his latest endeavor in progress - giving an explosive sendoff to a pompous politician when the man is at an incognito weekend getaway.

Unfortunately the mousy secretary Sim had been pretending to court, to get info on his target's movements, becomes suspicious and insists on an explanation. Rather preposterously, she decides the best way to do this is to go alone to the home of the man she suspects of ulterior motives. Now Sim must silence her before she can spill the beans. For this he arranges to lure her into the heretofore untenanted neighboring house and dispatches his not entirely trustworthy assistant (John Chandos) to finish the job.

But in what seems the beginning of bad luck for him, the new tenants (Jill Adams and Colin Gordon) choose that very day to move in, and there's also a pushy vacuum cleaner salesman (George Cole). This leads to a merry rigmarole in which the characters run helter-skelter and even the corpse seems to have a life of its own. The final showdown is in the titular Green Man hotel, where the bomb is supposed to go off. Will Sim's plan succeed or will his neighbors be in time to stop it?

If you like classic dry British humor, there is much to enjoy in The Green Man. It is all very silly and not remotely believable, but that doesn't stop the film from being fun. In the script by Sidney Gilliat and Frank Launder (of The Lady Vanishes fame), there seems to be a mischievous skewering of the snooty class, with characters called Upshott, Willoughby-Cruft and (really now) Boughtflower being the target of a lot of the humor. Alistair Sim is a consummate comic actor, carrying off his scenes with aplomb, and George Cole (who in real life was a protege of Sim) as the bumbling but dogged appliance pusher is an excellent foil. The much-loved British character actor Terry-Thomas as the Boughtflower character has a rather smaller role than one would have liked (he would have been excellent as the pompous politician target).

The film was also produced by Gilliat and Launder, who had a great regard for Alistair Sim. In fact it is said Robert Day (previously a camera operator) was a director more in name than deed, and the film was ghost-helmed by Sim (with some uncredited aid from Basil Dearden, who is seen directing  the cast in behind the scenes stills of the film).

For those interested, a few words on the UK blu-ray edition from Studio Canal:

The blu-ray gives an excellent clean presentation of this vintage movie with nice filmic detail and good contrast. The mono sound is limited by the source material (don't expect any floor-rattling explosions, and there is some hiss) but clear enough for the dialog which is the main thing. Extras include 3 approximately half-hour featurettes (plus a short photo gallery video)