Raudra (roughly translating as scary or horrible), which I stumbled upon on Amazon Prime, seems to have been birthed by the success of the Marathi culture inspired Tumbbad. While that film was a near masterpiece of modern Indian mystery-horror, presenting a fantastic fable of human greed with incredible visual and textural detail, Raudra sadly does not match up. 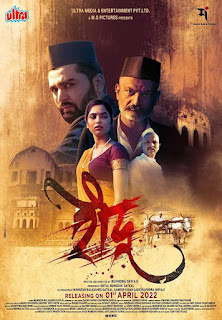 It is not made explicit, but the story seems to be set sometime in post-independence India (possible the 60's or 70's) in a remote Maharashtrian village. Trambak (Rahul Patil) enters the village as a census taker and arrangements are made for his accommodation at the crumbling vada (mansion) owned by the acerbic Nanasaheb (Deepak Damle). Nanasaheb is a dominating figure both at home to his wife and daughter, and for the villagers. Daughter Mrunmayee (Urmila Jagtap) is young and pretty, and sick of her father's oppression. She seems to find in Trambak a sympathetic ear for her complaints, perhaps even an escape route from her current existence.

Apart from going about his census task in the most halfhearted manner accompanied by buffoonish local aide Bando (Anil Padvankar), Trambak seems quite interested in the regional legends, and it becomes apparent early on that this is not mere idle curiosity. He is in quest of an old temple he claims to be of a family deity. Mrunmayee posits that the information he seeks may be available in an ancient book of records carefully guarded by her father, and volunteers to steal the book for him. Even after stealing the book, they have to contend with solving the riddles contained in it to decode the location of the temple, which is said to house an ancient treasure.

While promising in outline, Raudra disappoints hugely in execution. Writer-Director Ravindra Shivaji's screenplay is lackluster and contains glaring exposition lapses. The MacGuffin of Nanasaheb's book is a clumsy one - given his innate craftiness, it seems unlikely that for so many years before Trambak's arrival he would not have made similar deductions. Worse, the film is unable to set and sustain a pace. Instead of a carefully constructed ebb and flow as Trambak follows up various clues, we get a jerky stop-start narrative.  Characters are drawn with far too few shades to render them interesting. Mrunmayee could have been an layered personality, but as portrayed here (both by the writing and Jagtap's unskilled performance) is rather shallow.

Technically also, Raudra is a mixed bag. The decaying vada is an apt setting  and there are some atmospheric shots (Swapnil Kedare). But several other parts of the film appear prosaic and the music - both songs and BGM - overbearing. Apart from a nicely intimidating Deepak Damle, the cast is not particularly impressive. The film is just not able to sustain a specific mood, essential for this kind of story. The worst is saved for the climax. I really don't know what they were thinking here. Perhaps they wanted to make an impact with its abruptness, but it feels as though they stopped there on account of a total deficiency of ideas on how to finish off the story.

Looking up the entry for this film on IMDB, I find a very favorable rating and almost uniformly gushy user reviews (LINK), but my own experience left me quite cold.