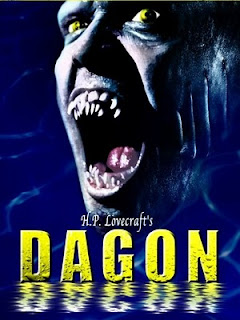 If Stuart Gordon is known for one thing, it is his screen adaptations of the works of one of horror literature's most revered deities H.P. Lovecraft. Having so far seen his adaptations of Re-animator, Dreams in the Witch House, From Beyond and now Dagon / The Shadow over Innsmouth (TSOI), I can say it's a reputation that's richly deserved because Gordon is able to consistently convey the overwhelmingly wierd essence of Lovecraft's work without slavishly mounting the original prose.

Innsmouth is one of my favorite Lovecraft stories and I had very high expectations for an adaptation of this one. In the original story, the protagonist goes to the remote New England coastal town of Innsmouth and finds that there's something literally 'fishy' about its inhabitants. The narrative deals with his frantic attempt to escape from the town and the horrible secrets that he uncovers in the course. In a brilliant move, Gordon shifts the narrative to a contemporary period and sets the action in an isolated Spanish coastal village where the geeky protagonist (played by Ezra Gooden who was later to do the lead in Gordon's tele-film adaptation of Dreams in the Witch-House) and his girlfriend land after they get shipwrecked in a storm.

Amidst the close packed stone houses, the narrow winding pathways and a perpetual blanket of rain, Gordon develops an atmosphere of intense tension and loneliness. We keep pace with our hero as he loses track of his girlfriend and finds his own life in peril from the decidedly abnormal residents. The only other complete human on the village is an aged drunk. Our hero is subjected to episode after episode of bizarre and often gruesome happenings, and a final revelation that will completely alter his knowledge of who he is.

Kudos go to regular collaborators Gordon and Dennis Paoli for generating a script that constantly hurtles from one strange incident to another. They are intelligent enough to understand where it's necessary to diverge from Lovecraft's vision without deprecating it in any way. In fact the film in my view does a better job of foreshadowing the protagonist's ultimate destiny than its source material. Also to be marveled at is the spectacular make-up and FX sequences that successfully belie their lesser budgets - the (necessarily) brief sight of the Lovecraftian creature at the end of the movie is worth the anticipation raised.

This film is a must see for all horror fans and especially those who are admirers of HP Lovecraft. Ia, ia, Cthulhu fhtagn!
Posted by Suresh S