The Science of Sleep [Michael Gondry] 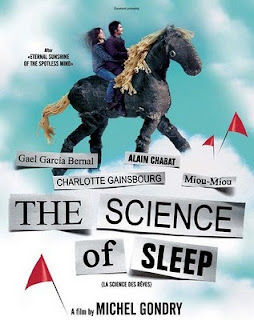 The Science of Sleep, if cut down to its barest outline, can be described as a romantic story about two people who discover interesting things about each other and want to be together. Stephane is a graphic artist persuaded by his mother to live with her and take up a nearby job, which he discovers is the distinctly mundane task of pasting type-faces on to calendars. His neighbor Stephanie is an artist herself. After their chance encounter Stephane's initial interest in her is more due his attraction to her friend Zoe, but he slowly discovers that the low-profile and sexually disinterested Stephanie has her own charms.

This could be a conventional date movie about how the underdog wins, but Gondry introduces some unique viewpoints which take it far above the mundane. First, Stephane is torn between the real world and a fantasy world where anything can happen. Gondry himself does not bother about strictly differentiating these two worlds and cheerfully segues from one into the other. The fantasy elements give Gondry free rein to express his own trademark visual sensibility, with deliberate lo-fi effects that exude their unique charm. Thus we see Stephane flying over swaying buildings or riding with Stephanie on a stuffed toy horse or sailing on a forest-covered boat in an ocean of cellophane, all essayed with a warmth that would have been impossible to convey using the conventional photo-realism obsessed brand of CGI or that overused 'Tim Burton style'.

Up to this was very much expected. But what pleased me far beyond was Gondry's writing. In Stephane and Stephanie, he has created characters that are non-stereotypic and very empathic human beings; we genuinely like them even as we are made aware of their respective flaws. In a lesser movie Stephane's idiosyncrasies would have been translated as a cuteness factor that endears him to other stock characters. Here we have no doubts that any emotional relationship between him and Stephanie will have its share of troubles. Even at the end the status of their equation is ambiguous; we are given no assurance that their association will go beyond heartfelt friendship. It is to Gondry's credit that we appreciate this ambiguity and do not as an audience ask for a forced resolution. While the leads are terrific, the film also has an interesting set of supporting characters that add to the humor and charm of the experience.

To sum up, The Science of Sleep is a terrific emotional experience that no one who likes off-beat narratives should miss. It is also a great date movie, and one you do not have to leave your intelligence at the door for.
Posted by Suresh S